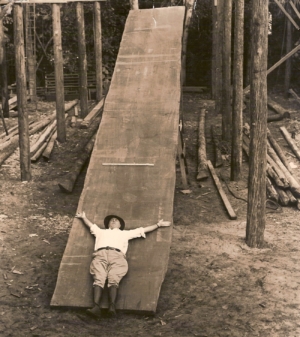 Peter O’Malley, President, Los Angeles Dodgers, 1970-1998, has donated the world’s largest one-piece mahogany table to McKee Botanical Garden, Vero Beach, Florida. In 1976, the 35-foot long, 5-foot wide, 4-inch-thick table was purchased by O’Malley with a vision to use it at Dodgertown. He maintained the table at Dodgertown until it was loaned back to McKee in 2003 for display in the original Hall of Giants and is now happy to make it a permanent gift.

“McKee Gardens will always be a special place for our family, as well as for the city of Vero Beach and Indian River County,” said O’Malley. “I’ve been very impressed with the McKee management, Board of Directors, and volunteers since McKee reopened in 2001 and its future is very bright. For many years, the table will be enjoyed and appreciated by residents and tourists in the Hall of Giants, which was originally built to accommodate it.
“In 1952, the first Dodger St. Patrick’s Day party in Vero Beach was hosted by my mother (Kay) and father (Walter) at that table, beginning a grand Dodger tradition of St. Patrick’s Day celebrations which continued for six decades and are now legendary. In the mid to late-1950s, campers from the summer Dodgertown Camp for Boys frequently visited when it was called McKee Jungle Gardens and they were amazed by the table’s size. In 1961 during spring training, I led the Tokyo Yomiuri Giants from the Japan professional baseball league on a tour of McKee, and they were intrigued by the impressive table. In 2015, my sister Terry and I hosted our large extended family for Thanksgiving dinner around the special table.”
The table has quite the journey over the past 118 years, traveling from the Philippines to St. Louis, New York and finally Florida. This magnificent piece of wood was brought to this country at the turn of the century for display at the 1904 St. Louis World’s Fair. The table weighs more than two tons and is made of kalantas mahogany. At the close of the fair, it was purchased by the American Museum of Natural History in New York City, where for 30 years, it was displayed as California redwood, for uncertain reasons. A curator discovered it was mahogany, whereupon it was transferred to the museum basement and stored, as only native materials were allowed to be exhibited.
In 1936, the table was acquired first by the New York lumber firm Balfour and Koch and was later purchased by a furniture company in New York, Schmieg and Kotzian. Two years after purchasing the table, while traveling to Florida on vacation, Mr. Schmieg met Vero Beach pioneer and entrepreneur Waldo Sexton, co-founder of McKee Jungle Gardens. Sexton was very familiar with the table as he had spotted and admired it while meandering through the basement of the museum in New York. In 1940, Sexton purchased the table from Schmieg and Kotzian and had it transported to Vero Beach via the Bull Line steamship Cornelia, arriving in nearby Ft. Pierce, Florida from New York. It took a crew of nearly 30 to unload it and get it on a truck to McKee Jungle Gardens. In 1941, Sexton built the historical Hall of Giants to preserve the magnificent table.
In 1976, McKee Jungle Gardens was forced to close when significant traffic diminished because of the opening of I-95 and Florida Turnpike. Today, McKee is more relevant than ever with well-planned enhancements and exhibits.

This unique treasure will now be at McKee permanently and is available for special events (phone 772-794-0601).

Treasure Coast Business is a news service and magazine published in print, via e-newsletter and online at tcbusiness.com by Indian River Media Group. For more information or to report news email [email protected]
Jul. 13, 2022|