Martin Artisan’s Guild, the HeART of the community 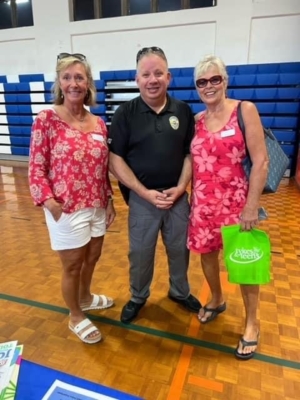 When Michaelann Bellerjeau joined Martin Artisan’s Guild in 2021, she found a willing group of comrades ready to join her when she became chair of The Community and Educational Outreach Committee on the Guild’s board.

A meeting was scheduled with Lauren Mustelier, Director of Enrichment & Engagement at House of Hope (HOH) and the collaboration between the two nonprofits has flourished ever since.

The first project was supplying the Artist’s Corner, which occupies a corner in HOH’s Enrichment Center, with a cabinet and art supplies donated by Guild members.

Following that, member Eduardo Gomez held a two-week workshop for HOH’s Art4Kids program. Another member, Brenda Leigh, has designed the plans for upcoming mural projects for the nonprofit’s community gardens, which are estimated to begin being installed this fall.

The murals are a long-term initiative and will encompass HOH’s four gardens over a three-year period, allowing children who show serious talent to assist with the murals in hopes of encouraging their artistic ability and fostering their skills in project planning, neatness and staying committed until something is completed.

Mustelier says, “The Martin Artisans Guild has been an amazing partner by recognizing the importance of arts in the communities we serve, connecting skilled artists to our programming, and raising funds to elevate the quality and increase the diversity of art classes we are able to offer at the Golden Gate Center for Enrichment."

On July 16, Martin Artisans Guild president Mallo Bisset and board member Bellerjeau attended Stuart’s 6th Annual Back to School Bash. The yearly event, which is hosted by the Stuart Police Department and was held at Murray Middle School, is an opportunity for parents and community members to meet school leaders and teachers and get vouchers and school supplies.

Bisset and Bellerjeau were on hand to thank members of the Stuart Police Department for overseeing the event and to meet other community members.

So far, it’s been a great start to the “Art Hands on Deck” program, but it’s just the beginning. There are lots of plans in the works for more collaborations with Martin County nonprofits.

Bellerjeau is enthusiastic about the future. “When I stepped into this position, I found the Guild already had many talented artists sharing their ability and time as volunteers. When connecting our artists to projects, I’m very grateful, it’s such a joy to see the hearts of our members as they use their vast experiences, skill, creativity and funds to help people from other non-profits in Martin County.”

For information about the Martin Artisans Guild, visit www.martinartisansguild.org.

Treasure Coast Business is a news service and magazine published in print, via e-newsletter and online at tcbusiness.com by Indian River Media Group. For more information or to report news email [email protected]
Aug. 12, 2022|