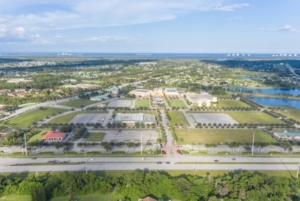 In a monumental development for one of the City’s most long-awaited projects, the City of Port St. Lucie has officially purchased 22 City Center parcels to carry out a new vision for the eastern part of Port St. Lucie.

“This is a huge leap forward for City Center, residents will finally see new momentum now that the City has possession of this property,” said City Manager Russ Blackburn. “City Center has been at the heart of Port St. Lucie’s vision for the redevelopment of its eastern side for nearly two decades.”

Aft­er a thorough analysis and years of legal issues, the City Manager and City Council determined in late 2020 that the City of Port St. Lucie was the entity best suited to redevelop City Center. Staff has been working diligently for the past year to acquire the parcels.

“This is a significant milestone for the City of Port St. Lucie, and especially our eastern side,” said Mayor Shannon Martin. “With our residents’ input and engagement, this acquisition gives the City an opportunity to create a new plan to carry out our community’s vision for this very important property.”

The City Center property has a long and complicated history, and the City Council voted to authorize a purchase and sale agreement with the Securities and Exchange Commission (SEC) Receiver for the purchase of 22 City Center parcels.

The City was able to close on the parcels after settling outstanding taxes with several taxing authorities and negotiating all certificates associated with the property representing a multi-agency, coordinated and unified approach to the City of Port St. Lucie’s acquisition.

City leaders believe the acquisition is a turning point for the City Center project. The timing is right for the City to step in and bring positive change and needed stability for this project and subsequently revitalize the entire eastern side of Port St. Lucie.

Taking ownership of the parcels gives the City control over the development of these parcels and will allow it to come together according to the community’s vision. Because City Center is in a designated redevelopment area, it is appropriate for the City to become the master developer and bring the stability needed to make this project successful.

With the acquisition now finalized, the City will partner with Treasure Coast Regional Planning Council to initiate a master planning process that will help determine the best uses and how to place the parcels on the market for individual sales.  This planning process will include significant input from residents and community members. We encourage those interested to sign up for email notifications about this project at www.cityofpsl.com/citycenter. That website also has a detailed FAQ section that can answer more detailed questions about this project’s history and events that lead to the City’s acquisition of this property.