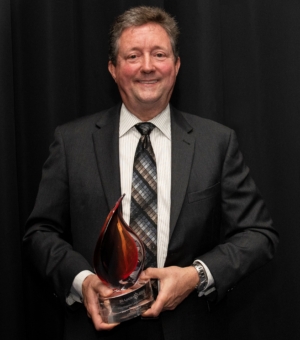 The award is presented annually to a dedicated business leader who has made significant contributions to St. Lucie County’s economy and quality of life.  The annual dinner and celebration, held at the MIDFLORIDA Event Center and attended by approximately 200, was sponsored by Florida Power & Light Company (FP&L).

Lord moved to the Treasure Coast when he was 11 years old and grew up with a love of the outdoors. After graduating from Stetson University with a degree in law, he moved to South Florida before returning to Martin County. Initially, Martin Memorial Hospital was a client of his civil legal practice but in 1998 he became the hospital’s first chief legal officer, in 2014 he became Martin Health System’s vice president and in 2016 its president. Lord retired at the end of 2021.

At the time Tradition Hospital was proposed, the state of Florida required a Certificate of Need before any new hospital could be built. Lord spearheaded the years-long legal and political campaign which ultimately led to the construction of Martin Health System’s Tradition Hospital. He then, as Tradition Campus leader, oversaw the construction process and the hospital’s subsequent expansion. To serve the western Port St. Lucie population, the health system also opened a freestanding emergency room in St. Lucie West.

Lord was at the center of the initiative to position Martin Health System for the future by joining it with the renowned Cleveland Clinic and played an instrumental role in bringing Cleveland Clinic’s Florida Research and Innovation Center to Port St. Lucie.  He’s taken highly visible and principled public health stands during the COVID emergency and regarding the threat to public health and the environment of algae-laden water releases from Lake Okeechobee.

“Rob has lived on the water most of his life and always enjoyed the beauty and recreational activities he was afforded. In recent years, as discharges from Lake Okeechobee threatened public health and the marine ecosystem on the Treasure Coast, Rob spoke out publicly about this critical environmental issue. His genuine concern for the health of our community and for the future of one of the most diverse marine ecosystems in the country made him a trusted and knowledgeable advocate,” read one nomination.

“During the COVID pandemic, in addition to overseeing the operation of three acute care hospitals on the Treasure Coast caring for many of the sickest COVID patients, Rob has also been an important resource for the community… He has routinely provided updates at press briefings and public meetings regarding the status of the community as well as the Clinic’s recommendations for our wellbeing. Throughout the pandemic, he has been a strong advocate for the healthcare professionals who are the frontline soldiers in this battle with a deadly, persistent enemy,” read another nomination.

The recipient of the Pete Hegener Leadership Award exemplifies the qualities of a visionary, a trusted role model and leader whose inspiration and achievements impact the quality of job creation, economic vitality and small business growth.

Pete Hegener, the man whose actions inspired this award, was a founding member and integral partner of the EDC, served on the Board of Directors, and was an Executive Committee member.  Pete was a pillar of the St. Lucie County community, having played a key role in the development of western St. Lucie County and Tradition.  Friends and colleagues described him as “honest, visionary, and caring.”  He passed away in March 2012, but his legacy is recognized through this award.

About the Economic Development Council of St. Lucie County

The Economic Development Council of St. Lucie County (EDC) is a private, not-for-profit organization dedicated to promoting economic vitality in St. Lucie County through the attraction, retention and expansion of businesses in the community.  The EDC works in partnership with local governments and the private sector to advance its goals of creating more and better-paying jobs for residents, broadening the tax base and improving St. Lucie County’s economic quality of life.  Contact the EDC at 772.336.6250, [email protected] or www.youredc.com.