Aquaculture is big business in Florida, accounting for more than $200 million in annual revenue and making Florida one of the top producers in the nation for this branch of agriculture.

Guests at the 2022 One Martin Farm-City luncheon on Nov. 17 learned about the innovative ways that the Florida aquaculture community is farming the seas, its growing promise to address an increasing global demand for food, and its local economic impact.

Now in its fifth year, the One Martin's Farm-City Luncheon, held in partnership with the Martin County Farm Bureau, brings together urban and rural residents of Martin County to celebrate the important relationships between farmers, consumers, civic leaders, and everyone in between who contribute to the community’s safe, abundant food supply. It is part of the national celebration of Farm City Week, traditionally held the week before Thanksgiving to highlight the interdependence between rural and urban citizens.

“People have an image of agriculture as fields of citrus groves or cattle grazing on the land, and that’s certainly an accurate picture of a good portion of western Martin County,” said Rick Hartman, president of One Martin, a nonprofit organization that hosts the local Farm-City luncheon each year. “But there’s much more to farming than row crops and livestock. There’s an entire aquaculture (fish farming) industry that provides important food sources grown in water.  It’s a big economic driver in our region.”

Butch Olsen, Executive Director of the Port Salerno Commercial Fishing Dock Authority, and Paige Cruise, a 16-year-old passionate advocate for Florida agriculture, inspired the sold-out luncheon audience with a renewed appreciation for the agricultural community and how interdependent rural and urban communities are. “Everything in our day, from the food we eat to the clothes we wear and the homes we live in, comes from the farm in some way,” Cruise said. “Agriculture is our life blood.”

The Farm-City luncheon menu was a model of farm-to-table cuisine: beef from the iconic Adams Ranch, flounder and sheepshead from the Port Salerno Commercial Fishing Dock Authority, veggies from the Everglades Agricultural Area, and potatoes from Agri-Gators. The event took place at Pirate’s Cove Resort and Marina, a prominent part of the Historic Port Salerno Waterfront District.

A fast-paced live auction by Ransom Hartman included a tour of Bull Hammock Ranch by ranch owner Wes Carlton, an Ernie Barnett painting of St. Lucie Boulevard, and an afternoon trail ride for four at the Hobe Sound Polo Grounds, which helped One Martin raise funds to continue its educational work.

One Martin is a 501(c)(4) non-profit organization dedicated to creating a more informed citizenry and providing opportunities for civil discussions on topics of importance to Martin County.  One Martin’s goal is to also encourage local government to operate more ethically, efficiently and transparently.  For more information visit www.onemartin.org or follow us on Facebook at www.facebook.com/OneMartinCounty. 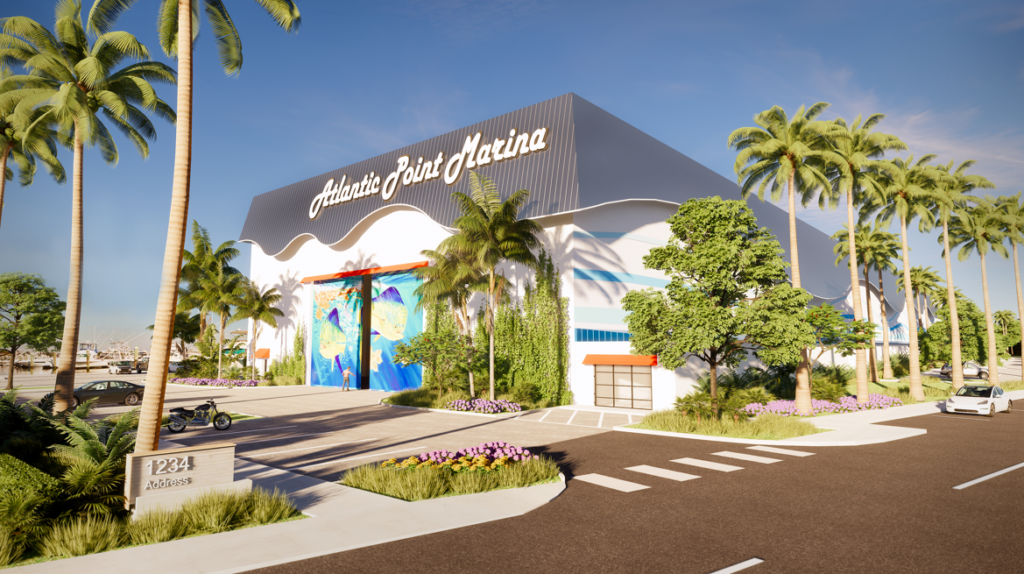 The marine industry is one of Martin County’s “Hubs of Excellence” and vital to its history and economic strength. A new marina was proposed for downtown Stuart to replace the inactive site that was once a bustling hub of somewhat mysterious marine activity. The Business Development Board supported the proposed Atlantic Point Marina, whose principals include Jeff Hardin of Straticon.

After the project received unanimous approval from the Stuart Commission (following removal of an originally proposed lighthouse feature that had generated some negative reaction), Jeff sat down with the Martin County BDB to discuss what makes Atlantic Point Marina so unique—and why he believes it will be embraced by more than just the boating community.

You can read the interview between Jeff Hardin and Martin County BDB below:

So, tell us what’s special about this project?

JH: Oh, so many things. Of course, we’re excited about our vision for the property and the ways in which it will meet the needs of the boating community but also cater to the general public at large. We’ll have dry dock storage—in a facility fortified to withstand Cat 5 storms—for up to 455 boats. We’ll have dockage 105 boats—including space for vessels as long as 160 feet. But we’ll also have a restaurant, transient dockage with preference to local boaters, loads of really interesting displays of public art, expanded public waterfront access and we’ll also incorporate a water taxi stop so people downtown can reach us—or depart from Atlantic Point—without needing to get in their cars.

So Straticon is not only the builder of the site, but you’re also a partner?

JH: Yes. Straticon Marine is leading up the construction. My wife Chris and I, who founded Straticon, are partners in the project alongside Mike Nixon and Lenny Tarzia. We’re all locals and extremely excited to do something like this in our community.

How big is the overall site?

JH: The total land mass is more than 10 acres, about 2 and a half of which are submerged. The property, by our research, basically accounts for half of the City of Stuart’s total commercial lands. But that’s only part of what makes the parcel special. This was the Evinrude Testing Site for many years. When we considered the legacy the Ralph Evinrude’s Outboard Marine Corporation has on boating, it’s hard to overstate the significance.

JH: The Evinrude family created and refined the outboard motor. Ole Evinrude, Ralph’s father, invented the single-cylinder engine back in 1907. It’s a great story. He used to take his sweetheart, Bess, who later became his wife, out in a rowboat on a little island in a small lake in Wisconsin. One hot day he decided to row back to shore to get her ice cream and of course it melted before he could return. He was a natural tinkerer and mechanically inclined, so that got him working on a motorized way to power the boat. He created a two-cycle gas-powered engine that he didn’t think had much commercial value, but Bess convinced him otherwise, and that launched the early years of the company. His son Ralph later took the company to the next level.

So what took place on the testing site?

JH: Interestingly, the site was heavily protected from public view, as the company wanted to safeguard its innovations from competitors. Ed Killer, the Stuart News outdoor writer, compared the site to Area 51. The barbed wire fence that’s around the permitter today is one example of the security. You basically had scores of engineers working on designs to make better, more durable outboards. The test drivers would do everything in their power to stress the engines and see what they could withstand. We’ve got great pictures of boats catching major air over waves going out the inlet. If you were a young, hotshot boat captain with a high tolerance for getting banged up on the water, it was a dream job.

JH: Absolutely. And we got a lot of really cool memorabilia from the Evinrude and Johnson Outboards era when we purchased the property. The storage area—which we demoed and recycled for reuse in construction—gave some great stuff that we plan to use in the décor of the restaurant.

What’s the cost of the project?

JH: Well, this is an $80 million project. And the need is really there to support it. Martin County has 18,000 registered boaters—and there are 46,000 registered boaters on the Treasure Coast. Boat sales—which took off during the pandemic—continue to remain hot. But the dry storage options, by our research, are less than 4,000 countywide.  And we could always use more slips, so Atlantic Point can provide big benefits on both fronts.

What can you tell us about the construction onsite?

JH: Well, this site in particular takes on water during king tides, so in anticipation of that as well as sea-level rise, we’re raising the entire site by three feet. And we’re able to do this with the fill we gather by dredging the basin on our property where we’re creating deepening access for larger vessels, as well as for the floating docks we’re creating to accommodate them.

How many jobs will be created?

JH: During construction, we’re estimating—conservatively—500 temporary jobs. And we’ve conducted outreach to local subs to ensure they’re aware and hopefully involved. We see a lot of opportunities here for local people to earn good money during what will be a really fun—not easy, of course, but definitely fun—undertaking. For the boat barn, it’s tilt-up construction, as the pre-fitted walls will be transported down the river to the site. It’ll really be something to see. We hope to get the news out that day. And when it’s complete, with all the public art, it will really be something.

What does the public art include?

JH: Some really good stuff. Local artist KC Scott, who specializes in marine themes, created the images of marine life that will cover the boat barn. While the ship store and the restaurant feature the Quonset-style roof modeled after the buildings Evinrude had on site, the roof design of the boat barn is what’s called a mansard roof, which will be outfitted with very elegant up-lighting that can change colors to correspond with holidays and important occasions. We’re refurbishing an existing memorial to Ole Evinrude that was on the property and giving it more prominent placement. And we’ll be using the broad, sort of canvas that the boat barn provides to project local artwork as a rolling showcase to artists in need of more exposure.

How will you know which artists to feature?

JH: We’ll be working with Nancy Turrell of Martin Arts on that, but it will provide a great element for visitors—not only to the restaurant but for the special events—live music, fundraisers, event weddings—that we plan to host. All told, Atlantic Point Marina will be something the entire community can be proud of and enjoy.

Learn more about this project and others by contacting the Martin County Business Development Board: bdbmc.org | (772) 221-1380

Treasure Coast Business is a news service and magazine published in print, via e-newsletter and online at tcbusiness.com by Indian River Media Group. For more information or to report news email [email protected]
Jul. 7, 2022|

MARTIN COUNTY — Treat Dad to a fun day of fishing in the ARC’ 5th Annual KDW Fishing Tournament on Saturday June 16th, 2018. You will be supporting a worthy cause that assists and supports children and adults with intellectual and developmental disabilities. Visit us at www.arcmc.org to register or call 772-283-2525.