When non-essential businesses were ordered closed in March, some restaurants like Vero’s Ocean Grill were able to switch to take-out and/or delivery. ANTHONY INSWASTY

The coronavirus pandemic didn’t take away our love of food but it did challenge our access to the food we love.

As Florida relaxed its stay-at-home guidelines, we yearned for the luxury of once again dining at our favorite restaurants — a good thing. According to the National Restaurant Association, “The restaurant industry, more than any other industry in the nation, has suffered the most significant sales and job losses since the COVID-19 outbreak began.”

It’s been a roller coaster ride. Restaurants, bars and beaches were closed in March with partial reopenings in May. By June, bars were closed again along with some beaches. Some counties made masks mandatory in public. Enforcement has been inconsistent — one restaurant might ask that customers wear masks in line or going to the rest room while another might refuse service to someone without a mask altogether.

“In the six months we were open, we didn’t have time to build an established clientele,” owner Glenn Pacicca says.

He put the restaurant on the market in March. “It’s a big disappointment,” he says.

While others on the Treasure Coast have closed as well, many restaurants are thriving again. 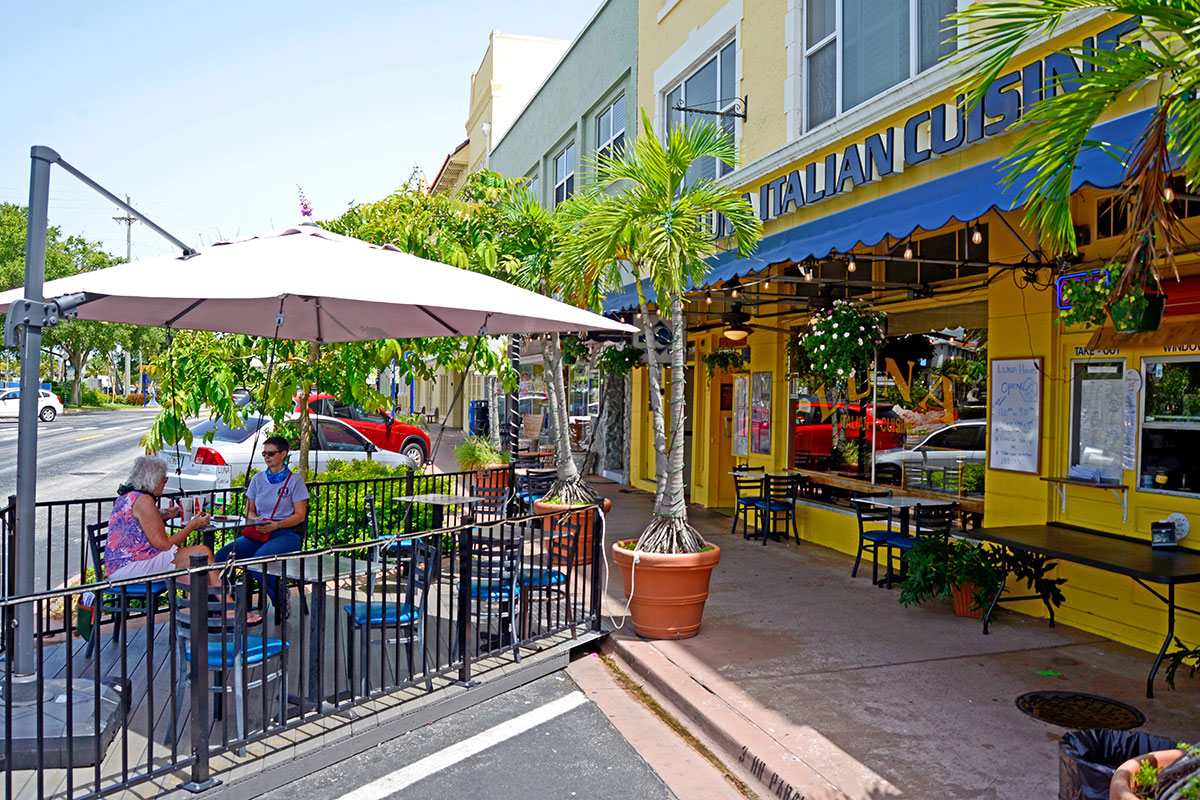 Luna Italian Cuisine has been in downtown Stuart for 29 years with a loyal following that adapted to takeout until the reopening. ANTHONY INSWASTY

ADAPTING TO CHANGE
In the COVID-19 cloud, one silver lining might be deeper respect and appreciation for professions patrons have tended to take for granted. As one server said, “It’s twice the work for half the customers.”

“Our employees were eager to return to work,” says Susan Horton of Luna Italian Cuisine in downtown Stuart. With only half the dining room open, however, the amount of business is balanced with the necessity of staff numbers. Horton says their takeout window stayed busy seven days a week.

At the time of the March shutdown, Vero’s Ocean Grill had 145 employees. Owner Charley Replogle laid off 125, keeping the 20 kitchen staff. Others tried to get unemployment, dealing with the state’s system crashing. “When we reopened, we were able to bring back everyone who wanted to come back,” he says.

Takeout and delivery had been offered by some restaurants already, but others began these services overnight.

“It worked well for us,” Replogle says. “For five weeks, we offered dinner takeout only. It didn’t make money, but it kept our name out there. We did a good job and customers were loyal.”

After reopening, takeout continues. “On weekends, there might be a 90-minute wait for dining because of the limited seating. Many people prefer takeout.”

“We ran skeleton crews and limited delivery to about a two-mile radius,” Brooker says, “handling it internally. The locals were overwhelmingly supportive.” 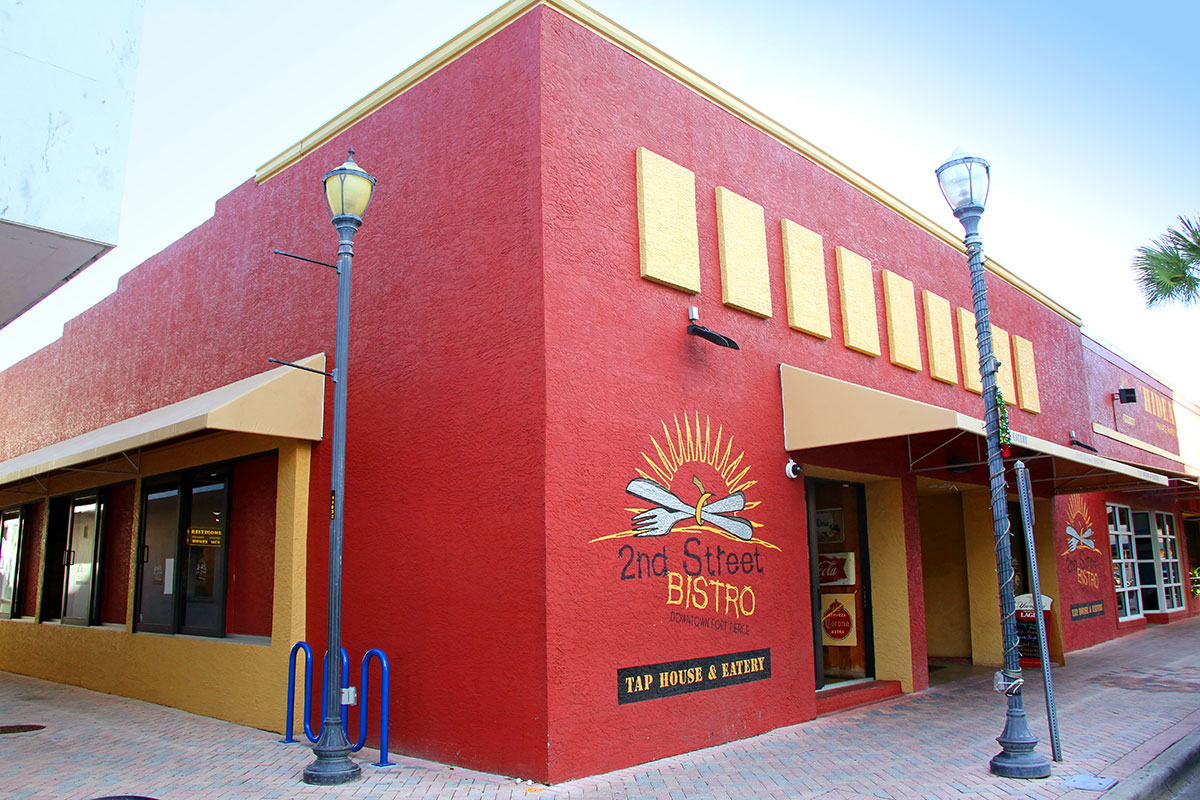 MORE FOR LESS
Much of the extra work deals with practical changes. Sanitation at Castaways had always been on point, Brooker says, but since the pandemic, they’ve gone beyond. Everything is sanitized often, from door handles, tables, chairs and floor to pens and guest book for payment.

At 2nd Street Bistro, drink refills come in fresh cups with new straws. Used menus are separated for sanitizing. As with everywhere, salt and pepper shakers have given way to packets; condiments are by request only.

Restaurants want customers to feel safe about returning. At St. Lucie Draft House, every other booth is available to encourage social distancing — a phrase now imbedded forever in our thinking. Some tables were put into storage.

The Ocean Grill installed dividers between booths instead. Fewer tables are available, but it has added two window tables for dining in the bar area as well as three tables with umbrellas on the deck outdoors with a limited menu.

Once its doors opened, delivery service at Castaways ended.

“Carryout has slowed but some people still don’t want to eat inside,” Brooker says. “We’re still getting a lot of sales.”

Outside, picnic tables and umbrellas have been set up for now.

“They don’t get used much during the day because of the heat,” manager Nick Olson says, “but at night it’s great.”

The Bistro also removed some of the tables inside to spread out more.

“Gloves give a false impression of safety,” the Grill’s Replogle says. “We use hand sanitizer and wash hands often.”

A local cleaning company sanitizes the entire restaurant every couple of weeks, giving everything a complete spray-over.

Luna’s staff takes all of the CDC guidelines very seriously.

“Our staff all wear masks and use gloves when appropriate,” Horton says. “Every menu is sanitized after each use and silverware is rolled into a napkin using gloved hands. Each booth is also sprayed with a sanitized mist.”

HELPING THE COMMUNITY
Tami McHale, an operating partner with St. Lucie Draft House, always allowed employees to purchase items from her. Would the public be interested?

“We posted our grocery list offer one Sunday night and had over 30 orders by the next morning,” McHale says.

Since April, orders have dwindled, but there are enough locals who appreciated the convenience of ordering meat, dairy, paper goods and water for pickup or delivery that the restaurant continued.

During the shutdown, Pacicca reached out to several organizations to see if they could use Prima’s commercial kitchen to help the community. He had no takers, but many have communicated to him that they’re sorry the restaurant closed. Everyone understands the difficulty small businesses have faced.

BOOMING BUSINESS
Ordinarily, summer is off-season for local restaurants. Snowbirds have flown home. This year, however, many stayed to avoid greater risks up north. Even at a reduced capacity, Olson says they’re seeing average summer numbers. “A lot of our regulars are coming back in.”

“There’s quite a demand,” Replogle says. “People want to go out. They see Vero as safe because our (virus) numbers have been low. We’re also getting people from central and south Florida who want to enjoy the beach and get away from home.”

One of the biggest financial setbacks has come from the loss of alcohol sales, but once it was allowed to open up at 25 percent capacity and expanded the patio area, Castaways “picked up right where we left off,” Brooker says. By June, sales were “outstanding.”

In Stuart, businesses were still adjusting to reopening when the Roosevelt Bridge was closed for repairs — another setback. But Horton remains optimistic.

“This is the most troubling time for the restaurant business and for all small business owners but … with the support of our loyal local customers we will make it through this too,” he says.

As of June 26, bars were closed due to lack of cooperation regarding social distancing.

Restaurants deriving less than 50 percent of their income from alcohol sales were safe for the time being, even possibly helped by the governor’s executive order. Instead of going to a bar, customers could get that drink with dinner elsewhere — with social distancing in place.

The roller coaster ride continues. Things change week to week, sometimes day to day. While the CDC still regards dining out to be a risk, area restaurants are reducing the risk with sanitizing and social distancing protocols in view.

Stay home if ill. Wear masks until seated. And tip your server well.