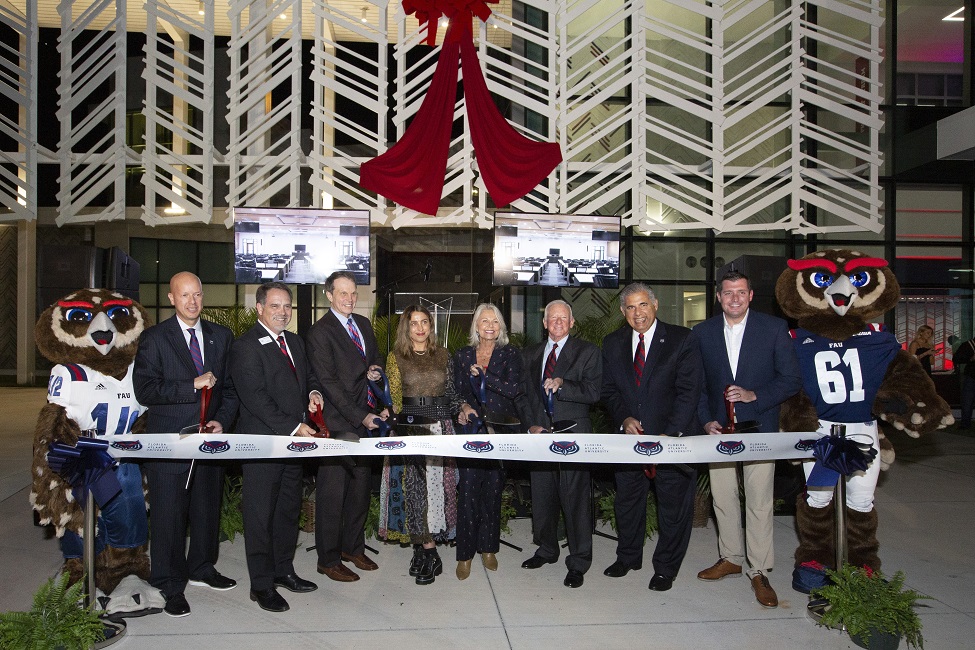 Florida Atlantic University celebrated the Schmidt Family Complex for Academic and Athletic Excellence yesterday with a ceremonial ribbon cutting. The event marked a major milestone for the transformational facility that plays a central role in elevating FAU's academic and athletic standing while helping students reach their greatest potential.

FAU President John Kelly; FAU benefactors Dick and Barbara Schmidt; Anthony Barbar, chair of FAU’s Board of Trustees; and other university leaders, community officials and FAU supporters participated in the ribbon-cutting ceremony among an audience of more than 200 guests, officially opening the building to the public.

President Kelly said the complex is a landmark on FAU’s Boca Raton campus that will serve the entire community.

“We are extremely grateful to all of the generous donors who have supported the construction of this outstanding facility on our Boca Raton campus,” said President Kelly. “Our journey to complete this state-of-the-art facility started with the Schmidts’ vision to build a complex that would benefit all our students. Today, this vision is a reality for FAU and the community we serve.”

“FAU has demonstrated excellence in the arts, engineering, the sciences, business, education and medicine,” said Dick Schmidt. “We all know about it, and in the coming years as we demonstrate our athletic excellence, the whole world will know about it.”

Located next to FAU Stadium, the Schmidt Family Complex for Academic and Athletic Excellence houses several centers of learning and athletics. In addition to locker rooms and outdoor practice fields, the complex’s elements include:

Approximately 52,000 square feet of the new complex is dedicated to classrooms, conference-style study rooms and an expansive atrium for networking and studying for students pursuing the college’s executive, professional and sports management MBA programs. The complex also houses 60 offices for the executive education faculty and staff members.

The 12,000-square-foot Academic Success Center provides FAU student-athletes with a comprehensive support program focusing on academic, personal and professional excellence. The center includes nine tutor suites, a career center, computer laboratories and two study hall rooms to create an environment that fosters well-balanced development and reinforces the highest academic standards and performance while providing the resources to prepare them for careers beyond collegiate athletics.

A permanent exhibit featuring artifacts from the former Kansas City Royals owner and longtime Boca Raton resident’s private collection, this 3,500-square-foot space showcases the museum’s more than 1,200 pieces in exhibits that offer visitors an intimate and visual progression of American sports alongside vignettes of the country’s growth. The museum is free to visit and open to the public.

Lynn, a long-time and dedicated benefactor of FAU, named the center to provide FAU student-athletes with an environment in which preventative treatment and post-competition healing are at the forefront. The center includes specially designed areas for pre-habilitation, rehabilitation and hydrotherapy treatments, as well as offices for training staff.

As one of FAU's "Football Founders," Baldwin has been one of the university's strongest supporters and has helped grow and develop FAU Athletics, and in turn, the student-athletes. The hall continues to do that as it brings together the Owls' finest moments and helps foster the connection between the student-athletes and FAU.

FAU gratefully acknowledges the lead donors of the Schmidt Family Complex for Academic and Athletic Excellence:

FAU selected Orlando-based HKS Architects Inc. as the architectural and engineering firm and West Palm Beach-based DPR Construction as the construction management firm for the complex.

FAU Athletics is comprised of 21 intercollegiate teams involving more than 450 student-athletes, including cheer and dance. The Owls’ 29,419-seat football stadium opened in October 2011. Since then, the stadium’s field was named in honor of legendary coach and “father of FAU football” Howard Schnellenberger. FAU Stadium also hosts the Boca Raton Bowl in December.