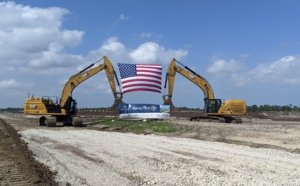 A recent analysis by the Economic Strategy Center (ESC) calculated that economic output in St. Lucie County is growing by more than $1.8 billion due to the attraction of new businesses and the expansion of existing local businesses since 2017.

The analysis covered 46 targeted industry companies that announced new locations or expansions in the county between January 2017 and June 2021. The growth will create 10,205 jobs; the companies will directly employ 5,881, create another 2,920 indirect jobs as businesses sell to the new or expanding companies, and induce 1,404 jobs through additional consumer spending, according to the report.

“Growth of more than $1.8 billion is very significant when you consider that St. Lucie County’s total GDP (gross domestic product) was $8.43 billion in 2019,” said Pete Tesch, president of the Economic Development Council of St. Lucie County (EDC). “This increase will have a tremendously positive effect on our local economy.” The Florida Office of Economic and Demographic Research provides counties with GDP and other economic indicators annually.

The 46 companies analyzed will invest $494,397,000 in facilities and equipment which will, in turn, generate $39.9 million in tax revenues annually. Of these, $12.1 million will go to the county, $11.8 million to the cities of Fort Pierce and Port St. Lucie, and $16 million to other taxing authorities such as the school district, fire district, children’s services, water management and others.

“We represent communities all over the country and I haven’t seen this kind of growth anywhere else, especially once you add in the 6,000 additional jobs expected from the commerce parks under development now,” said Trygve Vigmostad, ESC director.  “Your future looks bright. Very few communities have investors committing to the future as they are doing with these parks, and in a first-class way.”

St. Lucie County Commission Chair Chris Dzadovsky noted at the Nov. 2 commission meeting that current and past commissions have been committed to fostering economic diversity in the county which had been reliant on “rooftops, retirees, tourism and ag.” He added that increasing tax revenues from new or expanding commercial properties helps reduce taxes on residential homes, while the companies are also providing livable wages for residents.

“In the next 18 months as you drive the I-95 corridor from Orange Avenue to Becker Road, you’ll see very significant industrial development and job opportunities at every intersection,” said Tesch. Over the last year, the EDC announced a number of major new corporate locations and expansions including for FedEx Ground, Contender Boats, Maverick Boats, Cheney Brothers and Amazon.

“We’re on the right track. Working together, the private sector, the public sector – cities and county, all of us, over the last six years have helped bring new and expanding business to St. Lucie County,” Tesch said.

“It’s even more than job creation and investment, our economic development efforts are also focused on improving the wages of the men and women who work here, giving them a quality life and sustainable wage,” said Port St. Lucie Mayor Shannon Martin. “These projects show that is what is happening now.”

The city of Port St. Lucie was cited Nov. 3 as one of “Top Boomtowns in America” by SmartAsset, ranking in the top 25% for growth in the number of local businesses and household income growth. In March, the Milken Institute included the city as one of “America’s Best Performing Cities,” ranking the Port St. Lucie metro area as No. 31 of 201 large metro areas in the country. The city placed 14th for 12-month job growth and 37th for wage growth from 2014-2019.

One important tool used to help secure this commercial investment is Florida’s tax abatement program which allows municipalities to reduce some taxes for a short period of time on new facilities and new equipment, Tesch said. The state requires this program to be reauthorized by voters every 10 years. Port St. Lucie voters will see this question on their Dec. 7 ballots.

“Attracting high-wage employers is an extremely competitive process, we want to have the same tools in our toolkits as others in our region, state, and country,” Tesch said. “That’s why this upcoming vote is so important.” For more information about the referendum, visit cityofpsl.com/jobs and youredc.com/tax-abatement/.

The Economic Strategy Center used an IMPLAN® model with data from 2019, released in December 2020 for its study.  IMPLAN® is the most widely used system in the U.S. to compute economic impacts. To read the full report, visit youredc.com/studies_reports/2021.