BUILDING A WORKFORCE FOR THE 21ST CENTURY 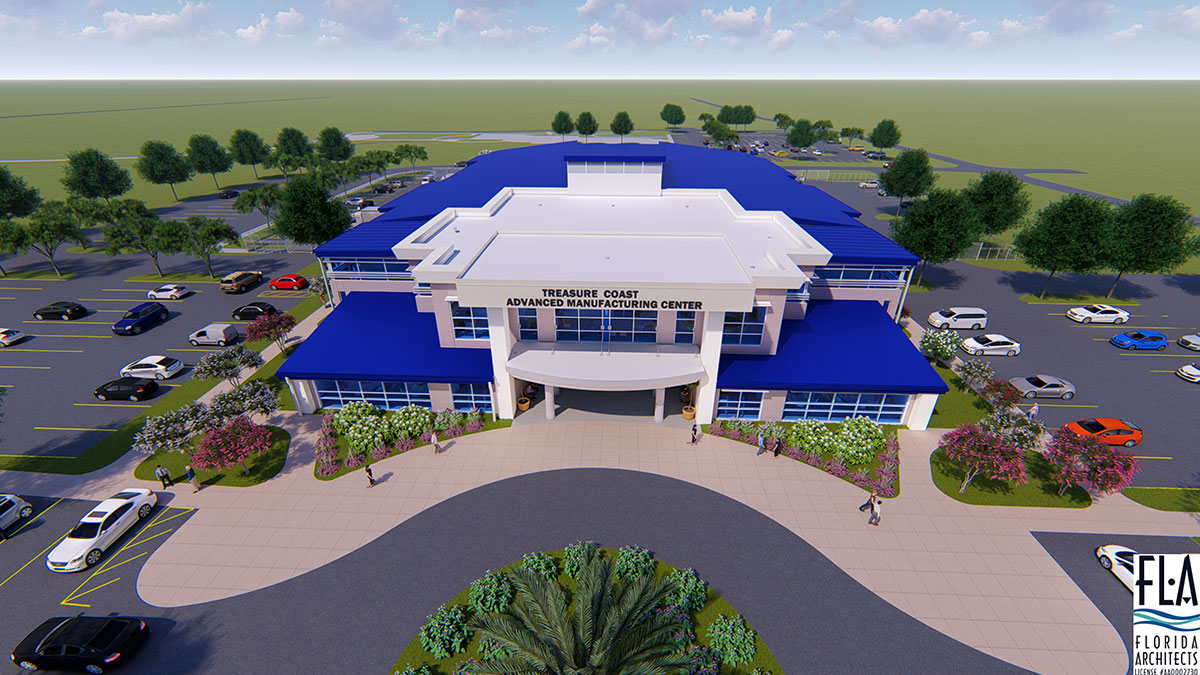 Training for the manufacturing needs of today and tomorrow has a look far different than in the past, and Indian River State College stands poised to anticipate and fulfill employers’ requirements with a purpose-built facility that joins together advanced technology and leading-edge industry training to meet key areas of workforce need in our region.

As we head into a more high-tech industrial era, IRSC is well on the way to meeting future needs with a $23.3 million industrial technology center at the college’s main campus in Fort Pierce. IRSC’s Treasure Coast Advanced Manufacturing Center will be a state-of-the-art facility offering programs that emphasize modern workforce training in the era of smart manufacturing, automation and industry 4.0.

Manufacturers, welders, electricians, auto mechanics and other careers utilizing hands-on skills are in high demand. Many of those jobs offer earning power on par with, or potentially exceeding, some traditional academic-oriented jobs.

“The new Treasure Coast Advanced Manufacturing Center is one of the college’s top priorities,” shares Dr. Edwin Massey, IRSC President. “This facility leads a new era in advanced manufacturing that will transform the region.”

The new 55,000-square-foot building is planned for a site adjacent to the Tomeu Center. In that location it will create a strong synergy with the nearby Kight Center for Emerging Technologies and the Brown Center for Innovation and Entrepreneurship. The current industrial technology building is nearly 50 years old. The college selected it for replacement, identifying the new TCAMC as an imperative capital construction project.

The push for the new facility has been fueled by what Treasure Coast employers have been telling economic development and workforce professionals for some time now.

In 2017, the Economic Development Council of St. Lucie County commissioned a Treasure Coast Skills Gap Study to pinpoint exactly where job needs and recruitment should coincide in the future.

Along with the traditional trade occupations, the Skills Gap Study also looked at newer technologies. These include “smart manufacturing,” where robotics and computer-controlled industrial equipment already are in use.

According to Marcelo Dossantis, director of business services for CareerSource of the Treasure Coast, one of the biggest needs is for computer numerical control machinists, who operate high-precision tools that are computer-controlled.

REPLACEMENT DIFFICULTY
The shortage of job candidates isn’t confined to machinists. Other companies with highly skilled employees are concerned about their aging workforces. They badly need replacement personnel, according to Dossantis. The Skills Gap Study by Gehant & Associates noted that “94 percent of employers in the trades, and 62 percent of employers in manufacturing, report difficulty in filling positions.”

IRSC’s new building will be critical in helping to boost existing employers and also in recruiting new companies to the area, according to Pete Tesch of the Economic Development Council of St. Lucie County.

To date, the college has secured approximately $12.7 million of the $23.3 million needed to complete the facility with a combination of state and local funding. In 2016, state legislators granted IRSC $1.5 million in planning funding. That was followed in 2017 by a further $5 million in state assistance. In this year’s legislative session, lawmakers voted to allocate an additional $4.195 million in public education capital outlay funds for the TCAMC. This year’s allocation is subject to Governor DeSantis’ approval in passage of the 2019-20 Florida budget.

IRSC has committed $2 million in privately raised funds for the investment.

The college hopes to receive the remaining $10.6 million in funding in 2020.

Once that money is received, construction could start immediately and be completed within 12 to 14 months.

Massey sees the demand for new technical skills only increasing over time. He also envisages these programs helping support an explosion of growth on the Treasure Coast.

“It all fits together to support the economic development plans for our community,” Massey says.

The TCAMC speaks to the college’s recognition and support for high-growth industry and will provide a critical component in meeting the region’s demand for a highly skilled workforce.