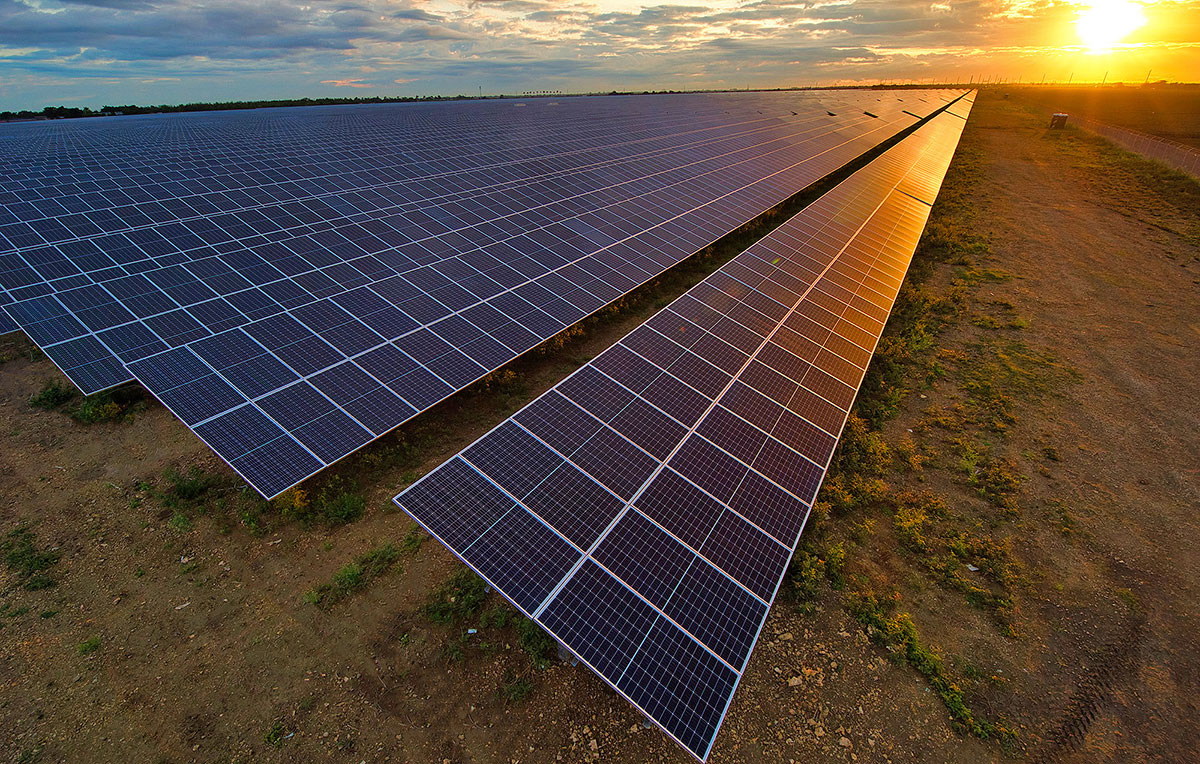 In its desire to produce power with fewer emissions, Florida Power & Light Company purchased acres of land throughout the state and in 2009 began setting up solar farms to harness the sun’s energy. FPL PHOTOS

Known as the Sunshine State, a moniker that attracts many tourists and helps the state’s economy, Florida is now seeing ever-expanding utilization of this great natural resource. Florida Power & Light Company has been harnessing the sun’s rays to provide electric power for homes and institutions since it built the first solar energy center in DeSoto County, the largest of its kind in the United States, in 2009.

The first Treasure Coast operation, a hybrid natural gas-solar facility known as Martin Next Generation Solar Energy Center, has 190,000 mirrors spread over 500 acres. The 75-megawatt plant, the first hybrid of its kind in the world, began operation in December 2010 and is the only one of its kind that FPL operates. Through the use of solar panels and natural gas, along with its current nuclear power plants, FPL is working to lessen its carbon footprint in Florida.

Today FPL operates about 1,250 megawatts of solar power capacity across 18 solar plants and smaller installations. The company plans to reach 2,000 megawatts of power once other plants come on-line in early 2020. This will be enough to power 400,000 homes, according to Stephen Heiman, FPL spokesman. The layout of the sites is unique in order to lessen impacts to wetlands and surrounding areas, he adds. 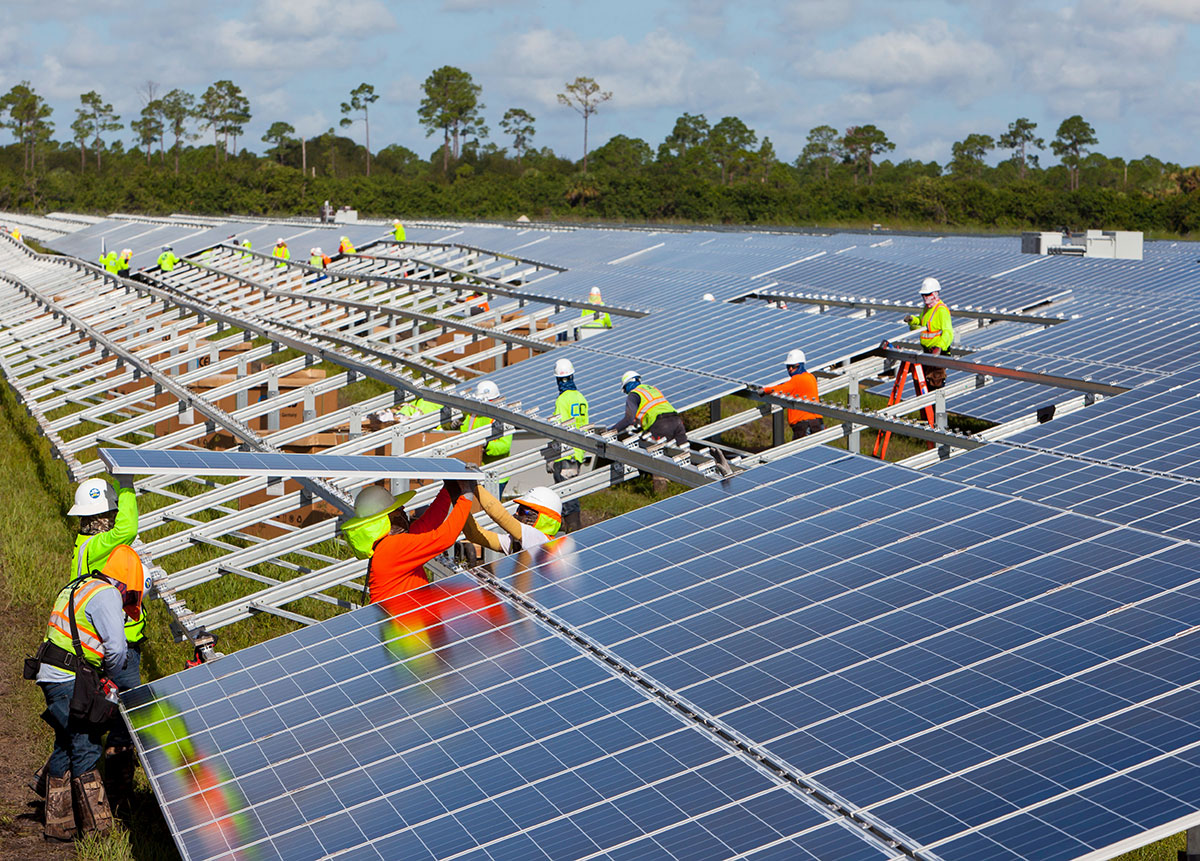 INCREASING CAPACITY
FPL has started construction on 10 more solar energy centers throughout the state. Targeting Charlotte, Hendry, Suwannee, Palm Beach, Baker, Okeechobee, Manatee, Martin and Putnam counties, these centers are hoped to be up and running in early 2020.

“FPL is well on its way to making Florida a world leader in solar energy,” Eric Silagy, president and CEO of FPL, states on the company’s website. “This year alone we’re building enough solar to increase our solar capacity by 60 percent and we’re just getting started, as we count down to the installation of 30 million panels by 2030.

“With 18 solar plants in operation and 10 more on the way, we’re adding even more emissions-free power to one of the cleanest systems in the nation, while consistently keeping our customers’ bills among the lowest in the nation.”

St. Lucie County has two solar farms. The first to go on line was Loggerhead Solar Energy Center, which is located off Glades Cut-off Road. Next to be completed was the Interstate Solar Energy Center which is visible to travelers on I-95 with its location along the west side of the interstate near the Indrio Road interchange.
FPL is currently seeking a variance for use of a property off Minute Maid

Road in western St. Lucie County that will become Pelican Solar Energy Center once the site is approved and the solar panels are installed. 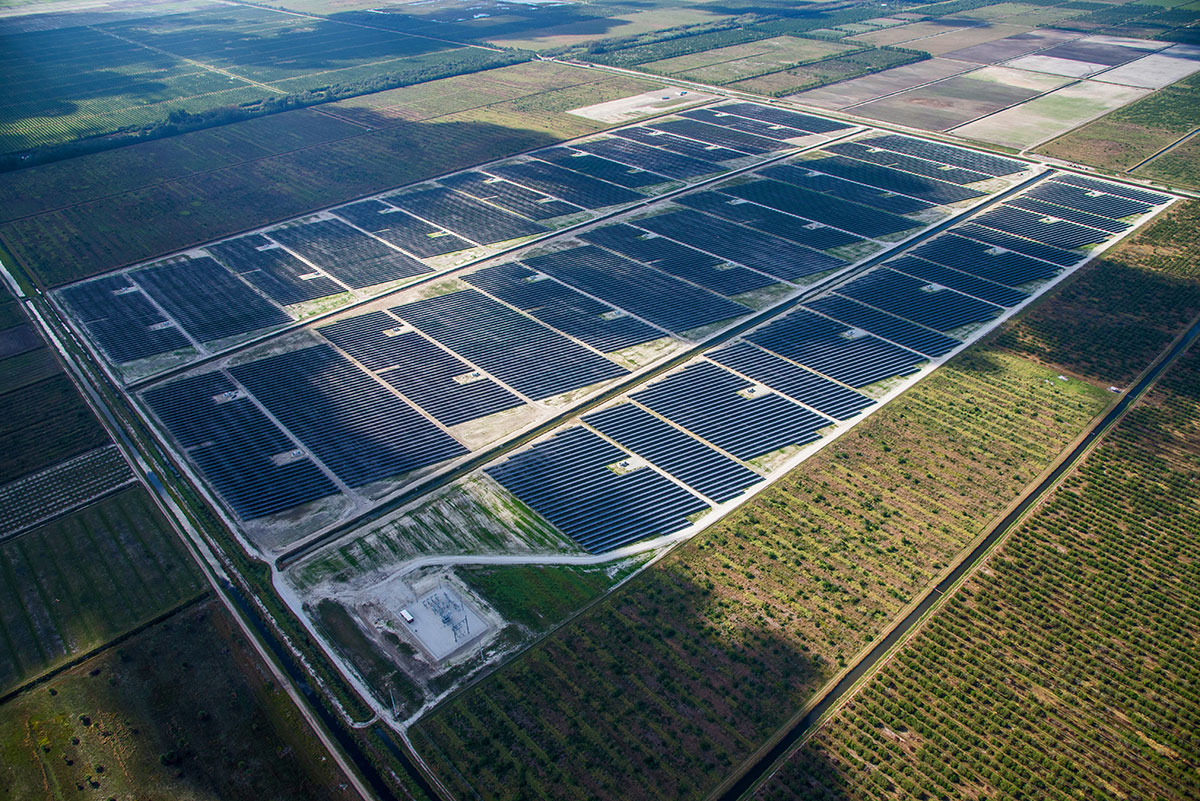 Indian River County is home to two solar farms. This aerial view of Indian River Solar Energy Center shows the set-up of the operation. FPL aims to have 30 million solar panels installed throughout the state by 2030.

Unique to the Blue Cypress Solar Energy Center and the Indian River Solar Center, both of which are located in Indian River County, are the flocks of sheep that wander around the sites working as a natural vegetative maintenance system.

“We looked at cows, but they were too big, and the goats were too destructive,” says Heiman. “It started as a pilot project, as we were looking for a way to maintain the vegetative growth. So, we settled on sheep. It’s not so much the chewing of the grass, but the walking around, stamping the grass down that works.”

The sheep keep the taller grasses from shadowing on the panels, he says, noting that a company on the west coast of Florida provides the animals.

“We are rapidly increasing our company’s solar presence, largely due to the declining cost of solar technology, because it has to make financial sense for customers,” Heiman says. “We look for land that is flat and clear that is close to our existing transmission lines. This helps make these projects cost-effective. These sites will generate millions of dollars in savings above and beyond the initial investment over their lifetime, savings that will be passed on to our customers, keeping our power rates, which are already among the lowest in the nation, down long term.

“Nuclear, natural gas and solar are our three main sources of power. It is a steady, efficient way to provide our customers with round-the-clock power with an emissions profile that is 30 percent cleaner than the national average (for power companies).”

Tom Kindred, regional director of the Florida Small Business Development Center at IRSC, says the college has operated a short-term program for workers in this field through its Corporate and Community Training Institute.

“We did a six-week training class for FPL, training students how to install the solar panels,” Kindred says. “We have run it multiple times. They were trained to work with subcontractors working with FPL and also for some small business installers, too.”

FPL, in keeping with its plan of lower energy costs and cleaner emissions, has implemented a couple of other programs over the years:

• Solar for Schools began in 2013 and has produced solar arrays at more than 100 schools and non-profit educational centers across the state. The use of solar power at the schools and centers helps keep the cost of electricity down.

• SolarNow, which permits FPL customers to contribute to community-type solar installations, began in 2015. The Young at Art Museum in Davie was the first such installation. An educational display at the museum presents information on the panels, the impact of weather and how much electricity is produced. In addition, solar panels can now be found on the grounds and roofs of several community facilities.