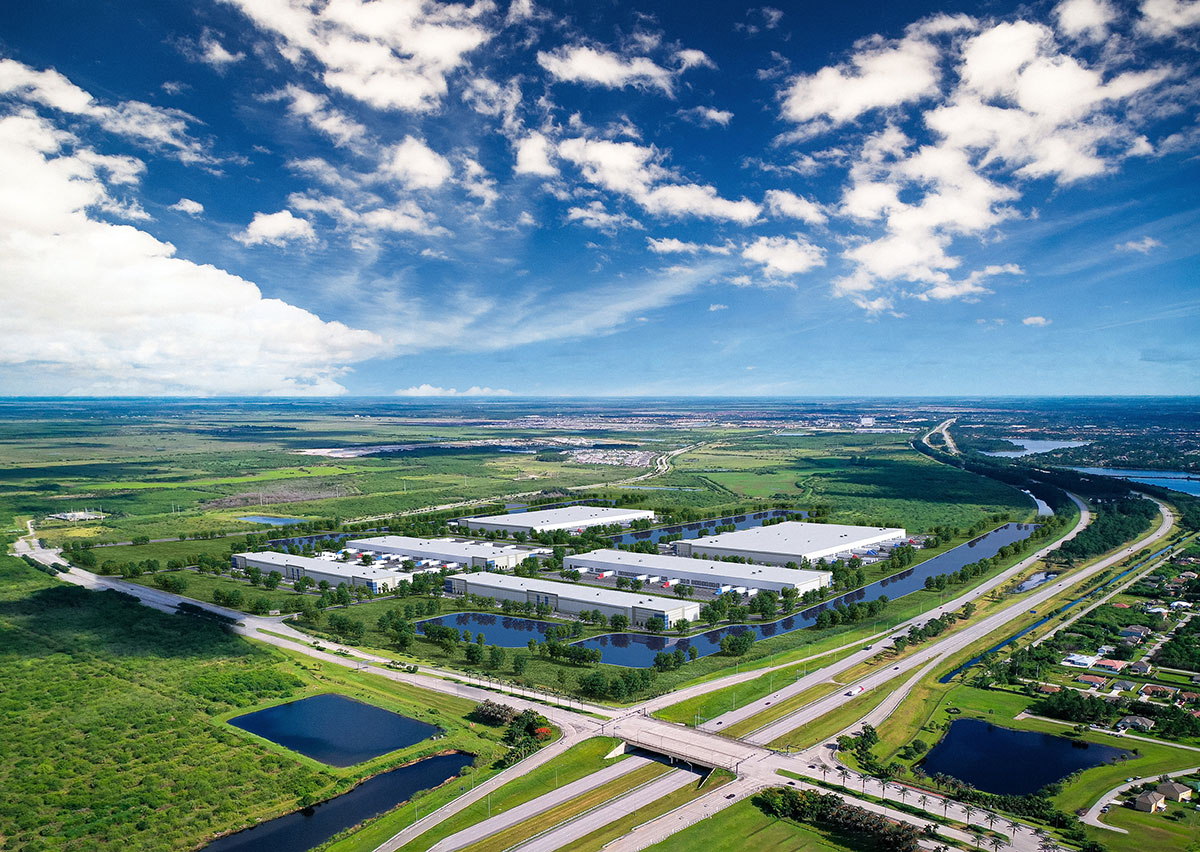 Legacy Park at Tradition is becoming increasingly popular as a site for large logistics center and distribution depots. It sits at the southern end of the Tradition Jobs Corridor and has easy access to I-95 via the Becker Road interchange shown in the foreground. SANSONE GROUP

Plentiful land for large-footprint distribution facilities is powering the growth

Stop at almost any Interstate 95 interchange in St. Lucie County and listen carefully. That rumbling in the background isn’t traffic noise, it’s a rapidly intensifying torrent of industrial and commercial development coming down the pike.

The world has finally discovered St. Lucie County’s wide-open spaces for business parks. Easy access along I-95 to South Florida and an abundance of affordable land for large-footprint commercial buildings has led out-of-town developers to flock to the region.

The epicenter of this activity is the Tradition Jobs Corridor in south county, but, as Economic Development Council of St. Lucie County president Pete Tesch noted, almost any interchange in the county between Fort Pierce and Becker Road has or will have its share of large-scale commercial developments in the near future. Many of these will exceed 1 million square feet, and are likely both to improve the tax base and offer hundreds of new good-paying jobs.

A recent council report listed five major commercial real estate companies with pending or active interest in developing commerce parks. These span the distance between The Treasure Coast Research Park off Kings Highway in the north down to Becker Road in the south.

GETTING NOTICED
The county lies within a three-hour drive of 70 percent of Florida and has significantly lower labor and land costs than anywhere else in southeast Florida, the report noted. 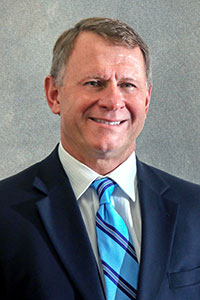 Pete Tesch, president of the Economic Development Council of St. Lucie County, says prominent national developers are becoming more aware of the benefits of locating to the Treasure Coast.

One of those is the Sansone Group, a St. Louis, Missouri, real estate company that recently announced two prominent commercial clients in its Legacy Park commercial center at Tradition. The commerce park will eventually house more than 5 million square feet of commercial space, according to Jeff Greenwalt of Sansone.

“The explosion of e-commerce and changes in logistics [handling] have created a demand for large last-mile distribution facilities,” Greenwalt noted. “These [require] a large footprint. There’s no suitable land anywhere else in South Florida. Port St. Lucie is the closest to the Miami and West Palm Beach markets.

“We’re working with several Fortune 500 companies and have their stamp of approval.”

Greenwalt said Legacy Park should encompass 5.4 million square feet of commercial development at build-out. He envisages the park as being fully committed within 18 to 24 months.

MATURING ECONOMY
Tesch said the county has reached a point of critical mass in terms of its economy and demographics. It has a maturing economy. Other development drivers include an available and capable workforce,Tesch said, but the availability of large parcels of affordable commercially zoned land is the real driving force. The EDC report noted that St. Lucie County has the lowest industrial land costs in southeastern Florida — at $1.50 a square foot, compared to $6.58 in Miami and $5.00 in Palm Beach County.

“We’re getting a lot of inquiries,” Tesch said. “I’ve never seen anything like it. There’s a lot of intense interest [in us].”

Tesch pointed out there also is a ballooning manufacturing and warehousing presence a little farther north of Legacy Park within the Tradition Jobs Corridor, a 4-mile-long strip of land alongside the interstate.

“So, we have a lot of big-boxes in distribution,” Tesch said, “but advanced manufacturing is going to become more important here.” 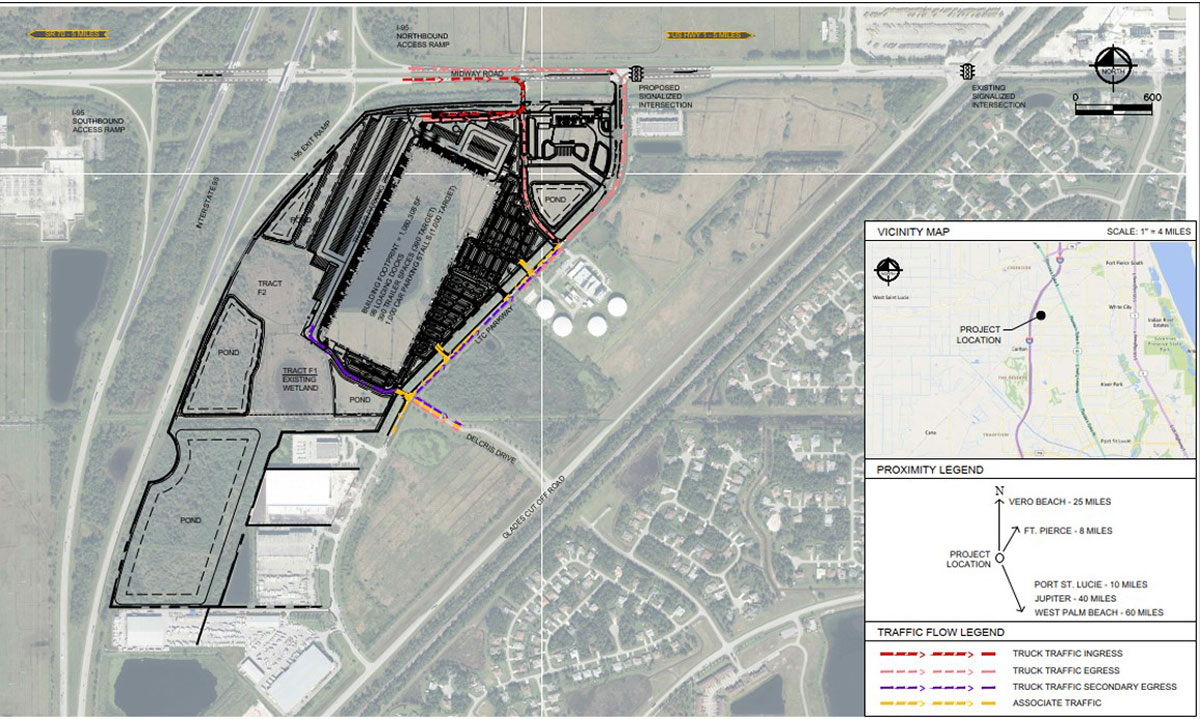 The proposed LTC Ranch Business Park, which will straddle I-95 at West Midway Road, is expected to become the home of a 1 million-square foot logistics and fulfillment center for an as-yet unnamed company. CITY OF PORT ST. LUCIE

FORT PIERCE GROWTH
Further north, at the intersection of I-95 and Florida’s Turnpike in western Fort Pierce, Interstate Crossroads Business Park has long been a top location for distribution and warehousing. The park is partially built out, but there are still 132 acres left to develop, Tesch said.

“They have very competitive pricing relative to Tradition,” he added. “It may be that their time is coming.”

He noted that bids have been solicited for 1.1 million square feet of distribution facilities at Crossroads.

“They’re building spec, but I suspect they have a brand-name tenant in mind. We’re not privy to any particulars yet, but I know they have had some interest.”

PROMISING JOBS
Another giant commercial/residential and shopping destination at the intersection of I-95 and Midway Road is on the drawing board. LTC Ranch Industrial will house a more than 1 million-square-foot single-user distribution center on 108 acres that will include more than 1,000 parking spaces for employees, loading bays for trucks and 390 drop-trailer parking spaces.

Again, the name of the tenant is confidential, Tesch explained, but local rumors that a very prominent online retailer will occupy the space are hard to avoid.

As Jill Marasa, the EDC ‘s vice president of business retention and expansion, noted, “as the parking lot tells you, it will be a lot of jobs. This is a very large and complex project. It is on a very rapid time frame.”

Close by, the LTC Ranch housing development has been an on-again, off-again project since the late 1990s. It is a go again under the auspices of national homebuilding giant D.R. Horton Homes. The company plans 4,000 single and multifamily homes and other development on the site.
A little further north, south of Orange Avenue in Fort Pierce, Seefried Development of Atlanta is planning a 650,000-square-foot industrial and warehousing facility.

Not much further north, Ashley Capital of Atlanta, one of the nation’s largest real estate investment companies, is seeking to acquire the 550-acre Treasure Coast Research Park off Kings Highway to develop it as a Class A+ commerce park for distribution, warehousing, e-commerce and manufacturing users.

“It’s all pretty phenomenal in my mind,” Tesch admitted. “Over the next 12 to 18 months we’ll be seeing major developments on almost every I-95 interchange between Fort Pierce and Becker Road. It’s the first time in my career I could be accused of helping to create too many jobs!”

Tesch noted that 60 percent of St. Lucie County’s workforce travels outside the county for work. He believes the upcoming wave of commercial development in St. Lucie could be an opportunity to reverse that daily flow and keep some of those people closer to home.

Port St. Lucie City Manager Russ Blackburn has been at the helm of the city’s efforts to attract jobs to the city. 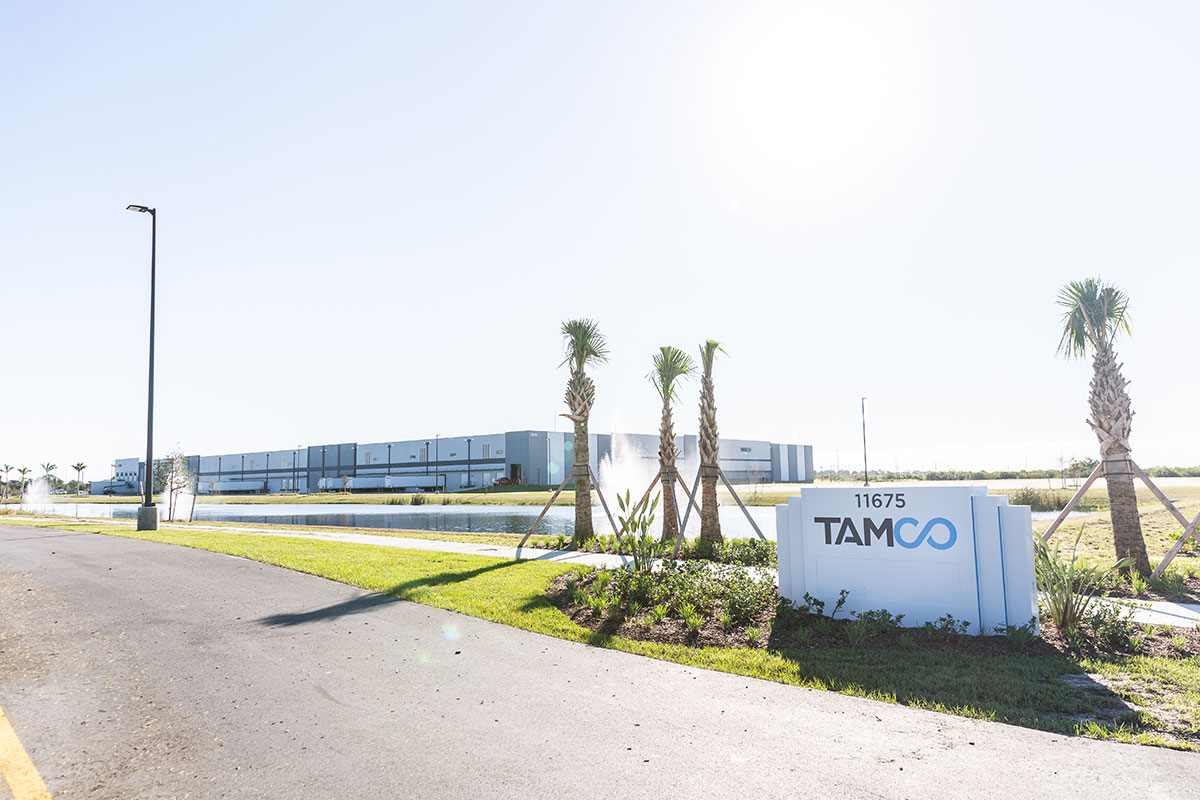 Lighting fixture manufacturer Tamco, part of the City Electric Group, was one of the first companies to set up shop in the Tradition Jobs Corridor. CITY OF PORT ST. LUCIE

FIRST BIG INVESTMENT
Blackburn traced the beginning of the popularity of the Tradition Jobs Corridor to the decision of Tamco/City Electric to build there in 2020. Port St. Lucie competed against Charlotte, North Carolina, and Dallas for the development of a 410,000-square-foot lighting fixture manufacturing facility and distribution center, he said.

“That was really the first big investment we had competed for,” Blackburn said. “Then it snowballed after that. The city had the opportunity to take over the Jobs Corridor [from Tradition Land Co., successor to the original developer of Tradition].”

Rather than selling the 1,140-acre corridor as one package, as its former owners had unsuccessfully attempted, the city decided to sell off individual parcels.

“It made a huge difference having a large footprint for big industrial and warehousing,” Blackburn recalled.

After success with Tamco and several other manufacturing and distribution successes by ACCEL International [electrical wire manufacturers] and Oculus Surgical, Blackburn said activity picked up at the southern end of the corridor in what has become Legacy Park.

“The EDC brought in Sansone Group,” Blackburn said. “They proposed buying 65 acres and have an option on an additional 300 acres for a distribution and commerce park. [Sansone] has been very successful in New Jersey and Indiana, and they have very good national connections. We’re now seeing a critical mass of large-footprint facilities that will offer above-average wages and benefits.”

PSL SUCCESSFUL APPROACH
The city manager attributes Port St. Lucie’s success in attracting developers of this caliber to its land bank, its proximity to major markets and a business-friendly approach. 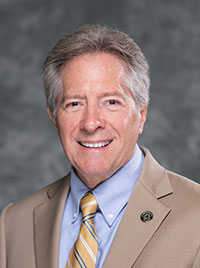 Russ Blackburn, city manager of Port St. Lucie, attributes the city’s success in attracting developers to its land bank, its proximity to major markets and a business-friendly approach.

“City Electric chose us for exactly that reason,” he said. “We’re committed to helping [prospective companies] in the development process, in streamlining permitting and building inspections.

The Sansone Group’s Jeff Greenwalt would agree. He said Sansone chose Port St. Lucie because it offered both the physical space and a much faster development process than most competitors. While other cities can take 12 to 18 months to process the paperwork, Port St. Lucie “has been unbelievably helpful — 90 to 120 days, which is unheard of,” Greenwalt said.

Blackburn said the city and county do offer new companies tax breaks, but newcomers only receive 100% relief on property taxes for five years. After that, tax advantages progressively reduce.

“That helps them make a big investment, but it’s not the only factor,” Blackburn said.

POTENTIAL TAX REVENUES
The exact results of new development in boosting the tax base are unclear at the moment, Blackburn said, but prospects look very bright. He noted that the Cheney Brothers project alone could increase city funds by up to $55 million. New employees will pay sales taxes and the St. Lucie County School District will receive enhanced tax income straight away, he said.

The city manager said he’s committed to keeping the welcome mat out as long as possible. That means maintaining a trained and capable workforce, in partnership with Indian River State College and other agencies including the Workforce Development Board.

“There’s no question, this could be a golden age for us in St. Lucie County,” Blackburn noted.

“We’ve long been known for affordable housing. Now we’re finally catching up in offering local jobs that require no traveling outside the county. That’s a very big shift for our county.

“There’s a lot going on and more to come,” Blackburn concluded.

When the city first announced the acquisition of the Tradition Jobs Corridor, the city manager had proclaimed, “We’re open for business.” It seems he was absolutely correct.