MADE ON THE TREASURE COAST 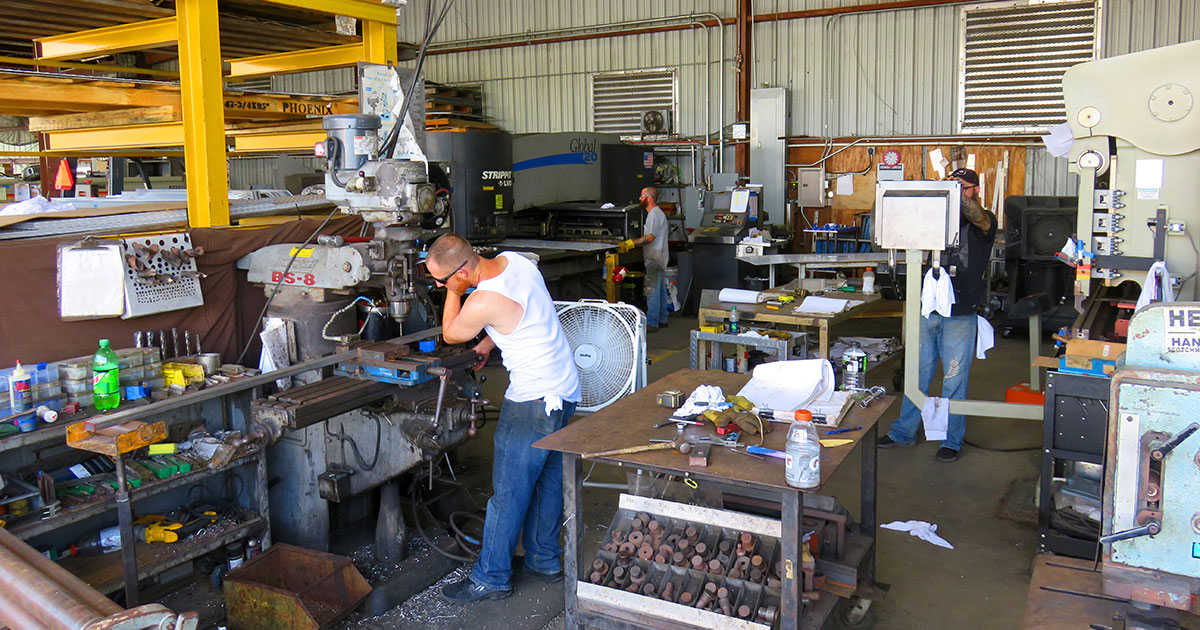 At least three U.S. presidents have used them. Perhaps hundreds of thousands of visitors have ridden on them at Disney and other theme parks. They are safety devices used on thousands of fuel and chemical tankers across the country. Boaters all over the world use products designed and built in Stuart.

We’re talking about products manufactured right here on the Treasure Coast and utilized by major companies all over the world. Yet many of us here are completely unaware of what is being crafted on our doorsteps every day.

So, here’s a look at a handful of local companies that are world leaders in their specialties.

Next time you see the President of the United States walk down the stairs rolled up to Air Force One, take a look at the top riser on the staircase and you’ll see “Phoenix.”

Presidents G. W. Bush, Obama and Trump have all relied on Phoenix products, as have many other world leaders. Most of the world’s major airlines also use stairs and other service trucks fabricated in Fort Pierce, according to co-owner Bill Wilcox.

The company will celebrate its 20th anniversary in Fort Pierce next year, Wilcox noted.

In addition to stairs, Phoenix Metals builds a variety of aircraft service vehicles used on the tarmac — from lavatory trucks to service and potable water trucks, used to quickly service aircraft during turnarounds.
Phoenix employs 47 skilled craftspeople, and the company recently expanded to larger facilities at Airport Industrial Park, north of Fort Pierce. 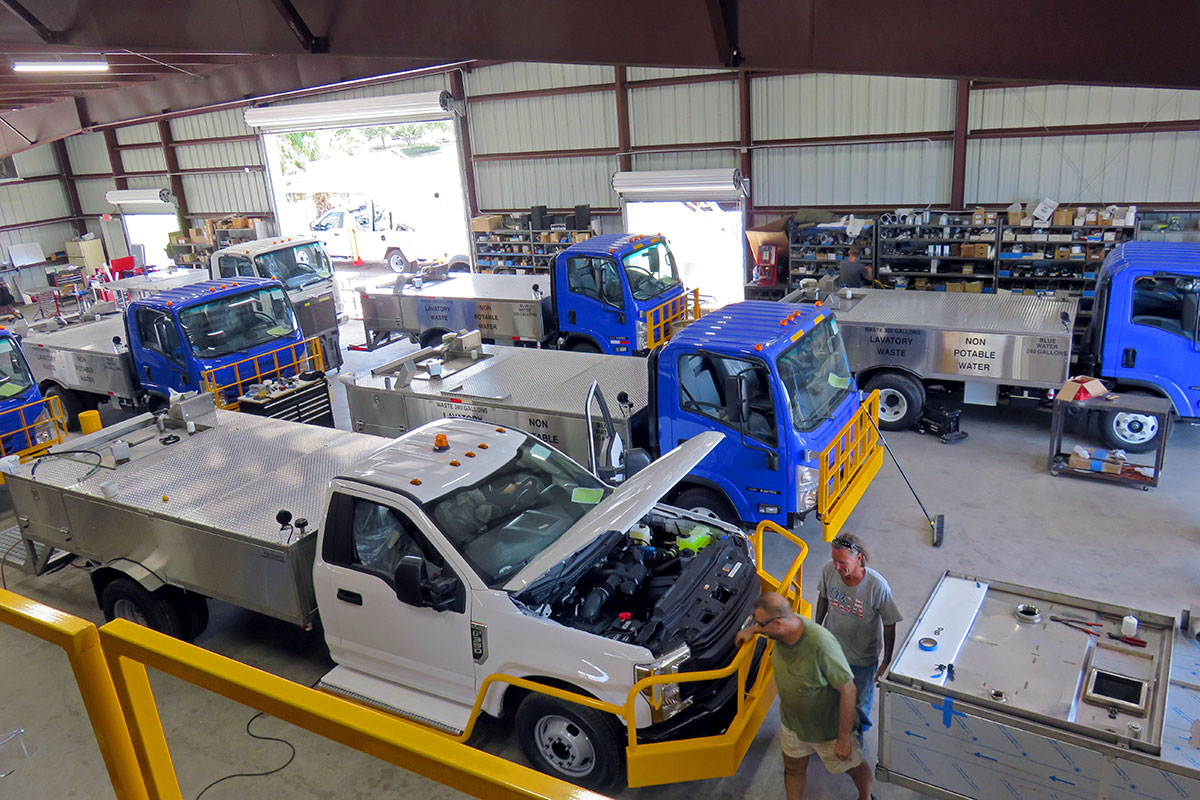 Equipment receives final preparation in the final assembly operations building at Phoenix Metal Products prior to shipping to Southwest and other airlines. PHOENIX METAL PRODUCTS

Wilcox is vice president of the Treasure Coast Manufacturers Association and a strong advocate of apprenticeships and on-the-job training to cultivate a stream of younger, skilled technicians his company needs.

Phoenix sponsors apprenticeship and boot camp programs aimed at high school students and graduates who enjoy working with their hands. Wilcox oversees a lot of high school job shadowing activities and organizes frequent tours of the facility for members of the Boys & Girls Club.

Phoenix employs machine operators, welders and final assembly mechanics well-versed in hydraulics and electrical systems. Wilcox noted that his employees have been working overtime every week for the past four years and there’s no sign of any let-up in sight. 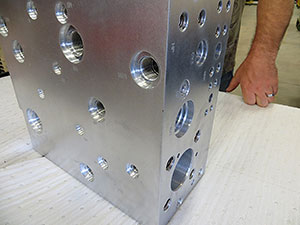 The company specializes as a contract machine shop to craft customer designs and manufacture custom components.

Advanced Machine has worked on jet engines, satellite manufacture and on several contracts for the U.S. Navy, including aircraft lifts found on aircraft carriers. The company is a Tier 2 Department of Defense component supplier and is certified for most aerospace applications.

Among Advanced’s many civilian clients are Disney and Universal theme parks. Over the years, the company has been called on to produce custom parts for amusement park rides. So, if you are a fan of Mickey Mouse, chances are you have ridden or relied upon an Advanced Machine & Tool component at some time. 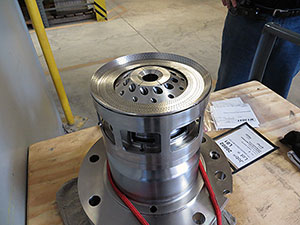 This stainless steel/inconel injector nozzle built by Advanced Machine & Tool, Inc. is designed to be used in a power generation plant. It directs steam that spins gas turbines in order to produce electricity.

The company is also an enthusiastic supporter of mentorships, apprenticeships and manufacturing boot camps to advocate for the need of programs in area high schools and colleges.

Girard Equipment is a third-generation family company, founded 70 years ago by the current owner’s grandfather in 1962 in New Jersey.

Owner Tim Girard relocated the company to Florida in 2007 for many of the same reasons other snowbirds come here. 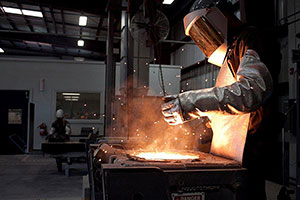 “The weather was really the determining factor. No more long commutes. We had statewide (weather-related) emergencies three or four times a year. One year it happened eight times.”

Also, Girard noted, “the northeast is not particularly manufacturer-friendly, and the Treasure Coast is pretty good at doing things right, so Florida is much better.”

You’ve no doubt driven alongside road tankers carrying fuel or chemicals, or seen railroad car tankers holding similar products. Girard valves allow the contents of such containers to “breathe” by controlling the pressure of the tank under all circumstances, Girard said.

Girard Equipment employs a total of 85 people in two separate facilities: Gifford, north of Vero Beach, and in Fort Pierce. 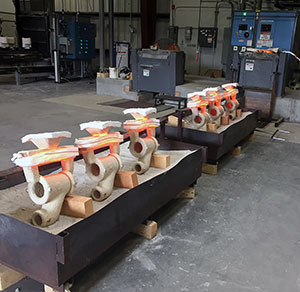 Recently cast valve bodies cool off on sand beds in a post-production area of Girard Equipment’s Fort Pierce foundry. The finished safety valves will be used in a variety of applications on highway and railroad tankers carrying hazardous materials.

Fort Pierce is where the company’s foundry manufactures valve components, while the Gifford site is an assembly and service plant. Tim Girard said the company will soon be relocating the Gifford operation to a new plant near the Vero Beach Regional Airport.

LENCO MARINE, STUART
Lenco Marine, part of the Mercury/Brunswick Corporation, is a world leader in the design and manufacture of linear actuators used in the marine industry.

In most applications, Smith noted, trim tabs are used to act as a boat “shock absorber” to offer a smoother, more comfortable ride in rough water conditions. However, the company also builds actuators for the ski-boat industry where trim tabs are used to do exactly the opposite: to create more wake behind a boat which allows a skier to “surf” the waves.

Lenco Marine has been located in Stuart since 1998, when the design for a trim tab actuator on sportfishing boats was purchased by two fly-fishing guides based here. The company was purchased by public-traded Mercury/Brunswick in 2018.

Today, the company boasts 70 percent of the world market share in linear actuators.

Coming to a computer screen near you: The company is busy working on new products, Smith said, which will usher in a new era of electronic integration of all a boat’s systems on one screen, no matter which manufacturer produced the individual components.

Perhaps the Treasure Coast isn’t famous — yet — for manufacturing, but that sector is expanding rapidly here, thanks in part to increased coordination by the Treasure Coast Manufacturers Association, local governments and economic development councils.