SMALL BREWERIES ARE HOPPING AND FLOURISHING 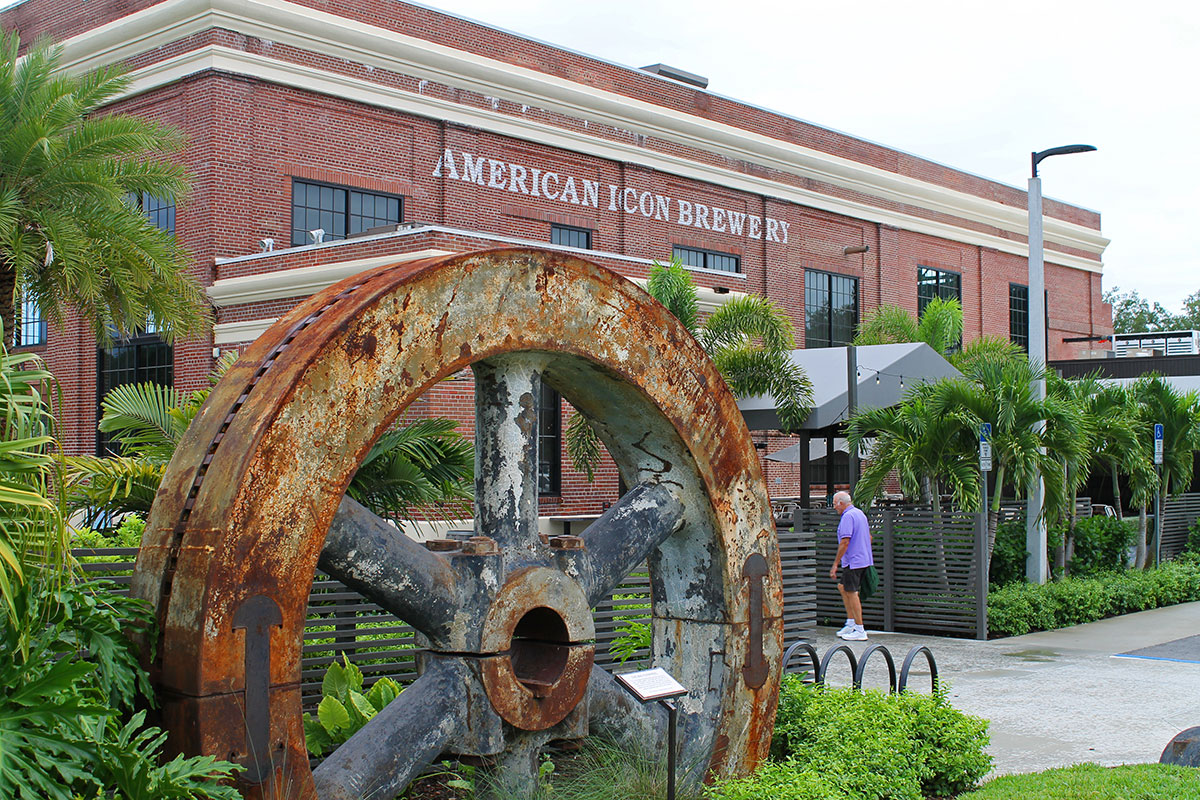 American Icon Brewery opened in October 2017 on the site of the old Vero Beach Municipal Power Plant, built in 1926 to serve a growing city. The building was named to the U.S. National Register of Historic Places in 1999. BERNIE WOODALL

Patrick Kirchner, co-founder of Mash Monkeys Brewing Co., with poster of the Sebastian brew club where the notion of the brewery began, and the Mash Monkeys logo. BERNIE WOODALL

Not long ago a desert for craft beer lovers, the Treasure Coast is now home to 10 small breweries, one of them an easy drive for most people in the area. All 10 have been established in the past seven years and stretch from Sebastian in the north to the newest one in Stuart. None are in Okeechobee County yet.

Sailfish Brewing Company in downtown Fort Pierce was the first, opened in early 2013. David BuShea, president and co-founder of Sailfish, says when he opened, the closest craft brewer was Tequesta Brewing Company, 40 miles away.

Essentially, every variety of beer is available at these breweries, all of which were begun by owners who excelled in home brewing before being convinced by friends to step it up to commercial scale. Small-scale commercial, that is. Each of the breweries in the area is tiny compared to major beer corporations. Anheuser-Busch InBev makes 70 percent of the world’s beer, and its North American production is about 95 million barrels annually.

The largest producer among the craft breweries on the Treasure Coast is Islamorada Beer Company, whose Fort Pierce location is expected to make 12,000 barrels of beer this year, up from 8,000 barrels in 2018.

The brew pubs here have friendly atmospheres that attract those passionate about the beverages and others who simply want something that tastes stronger than what Budweiser, Miller and Coors offer.

Customers enjoy the offerings in the brew pub at Pareidolia Brewing Co. in Sebastian. BERNIE WOODALL

There are seasonal beers, year-round ones and experiments that become favorites — or are quickly abandoned. Customers can go into the same craft brew pub on successive weeks and expect the rotating taps to offer something they’ve never had before each time. Craft brewers like to experiment, using customers as willing test subjects for innovative attempts at lagers, pilsners, porters, stouts, sours and other varieties of beer.

“We produced 158 different flavors and styles of beer last year,” says Dwayne Buchholz, owner of Side Door Brewing Company in Port St. Lucie. “Some were greeted with enthusiasm and were overwhelmingly consumed with excitement, others perhaps not so much.”

There is a fellowship among Treasure Coast brewers as well as most craft brewers throughout the United States, notes Mike Malone, co-founder, president and head brewer of Walking Tree Brewery in Vero Beach.

“I don’t know any other industry where there is this kind of camaraderie,” says Sean Nordquist, executive director of the nonprofit trade association Florida Brewers Guild, based in St. Petersburg. “The general feeling is that a rising tide floats all boats. By helping each other, you are helping your own brewery.”

Chris Cischke, owner, along with his wife, Amanda, of Ocean Republic Brewing in Stuart, says their business would not have been able to open in late July without last-minute help from fellow brewers.

“Walking Tree lent us the hoses we needed to make it” to opening night, July 26, says Cischke. He opened with a guest tap of Walking Tree beer in honor of the assistance.

The issues that crop up in the last month before a brewery opens lead to surprising cost increases. But before making it that far, beer entrepreneurs often have to convince local governments to allow them at all, and have to get banks to take a chance on them.

BuShea of Sailfish says when he and his business partners went about finding a location for their brewery almost a decade ago, Fort Pierce city officials were skeptical, thinking that they were being asked to allow another loud bar in a neighborhood. It took some educating, BuShea says, but the city officials came around and even changed zoning near downtown Fort Pierce to allow Sailfish to open. It has since moved a few blocks to a larger location downtown.

Some brewers say they went to multiple bankers before getting a loan approval for their businesses that were viewed as quirky and overly risky ventures by some money managers. And each brewery owner says they wrote long, detailed business plans before being seriously considered for loans.

Rob Tearle, co-owner and co-founder of Hop Life Brewing in Port St. Lucie, says he and his business partners, including fellow career firefighter Jim Kelly, also wrote a long, detailed business plan. They expected it would cost around $600,000 to open Hop Life, but in the end, renovations to their building and other expenses increased that figure to about $1.4 million.

“It’s a business. It’s not a glorified hobby,” Buchholz points out.

LATE TO THE GAME 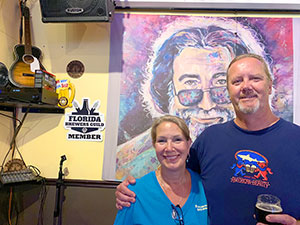 The owners of Pareidolia Brewing, Lynn and Pete Anderson, came to the Treasure Coast from a hotbed for craft brewers, Portland, Oregon. BERNIE WOODALL

The Treasure Coast and Florida have been playing catch-up to some Western, Midwestern and New England states that have fostered craft breweries since the 1980s and 1990s.

It’s no coincidence that Pete Anderson, who owns Pareidolia Brewing Co. in Sebastian, and Buchholz, of Side Door Brewing, each lived in craft beer haven Portland, Oregon, before relocating to the Treasure Coast.

“When my wife, Lynn, and I moved here in 2004, we were shocked at the lack of craft beer,” says Anderson, whose wife is co-owner.

“Back then I noticed two craft beers, Sam Adams and Sierra Nevada, and they were in bottles. No craft beers on tap anywhere. I looked at Lynn and said, ‘We’re going to die here.’”

The first craft brewer on the Treasure Coast was the short-lived Hops Grillhouse and Brewery in Stuart in the 1990s, at the same site as another short-lived brewery, Monkey King Brewery & Floribbean Grill, which closed a dozen years ago.

Florida’s first craft brewery was Dunedin Brewery, north of St. Petersburg, which opened in 1995. By the time Sailfish Brewing in Fort Pierce opened in 2013, there were far fewer than 100 craft breweries in the state. That figure will top 300 by the end of 2019, says Nordquist of the Florida Brewers Guild.

The Tampa-St. Petersburg area is the epicenter of Florida craft beers, followed by Jacksonville, Nordquist says. However, all other areas, including the Treasure Coast, are fast catching up. Even small towns like LaBelle in Hendry County now have a craft brewery with a tap room.
There is still plenty of room to grow in Martin, St. Lucie, and Indian River counties, says BuShea.

“My philosophy has always been the more the merrier,” says BuShea, adding, “Breweries are growing exponentially and tap handles are not, so there is going to be intense competition at some point. It’s important not to lose tap handle coverage out there in the market.”

Tearle of Hop Life agrees. “The competition is getting fierce. There are only so many tap heads.”

Florida law requires breweries of all sizes to use distribution companies to sell their products outside of their own tap rooms. Of the 10 area breweries, only the two youngest ones, Mash Monkeys Brewing and Ocean Republic, do not distribute their beers.

Islamorada Beer Company, which has a production plant in Fort Pierce and company headquarters in the Florida Keys, distributes most of its production and reaches all of Florida but the far western counties in the Panhandle.

American Icon Brewery’s distribution footprint is from Titusville to Stuart but has ambitious expansion plans. Only Sailfish Brewing has some of its beer distributed throughout the state.

No area brewer reaches outside Florida at this point. 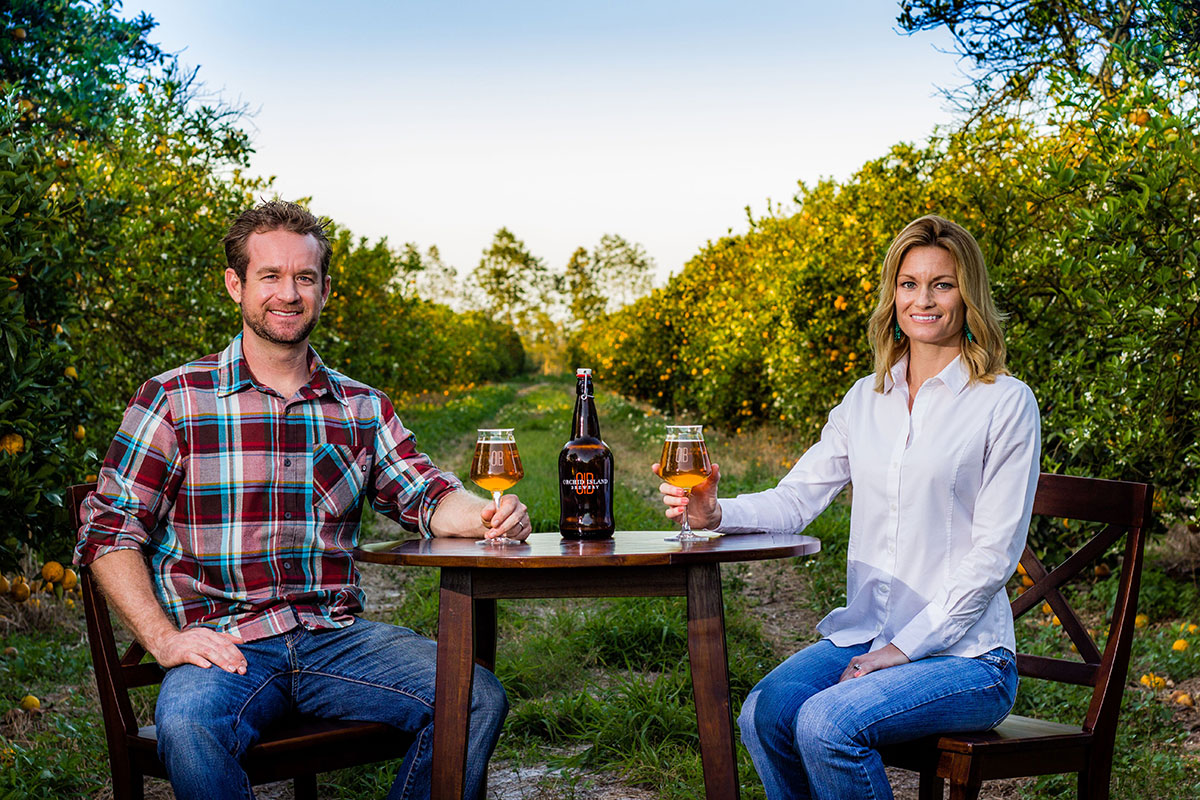 COMMUNITY OUTREACH
Craft breweries of the Treasure Coast show off their tanks, proudly allowing customers to drink the product while looking through glass at where it came from.

Each of the area’s brewers strives to represent the local culture in the products they make, using local ingredients when possible.

“The nature of craft breweries has been and even more now is hyper-localism,” Anderson of Pareidolia says. “In your community. Sourcing ingredients when you can locally. Supporting local businesses, local charities. And supporting your local musicians. It’s part of the whole web of community.”

The Orchid Island Brewery on the barrier island in Vero Beach typifies the sense of the breweries celebrating its local culture.

Orchid Island, the area’s second brewery that opened in August 2014, celebrates its “Grove to Glass” project by using local fruit, including some grown on wild trees on the barrier island.

On the Treasure Coast, the biggest employer among the brewers is American Icon, which employs 80, according to its general manager, Joe Giquinto. 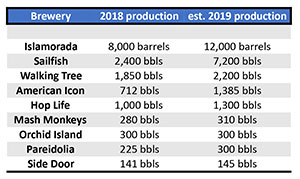 By volume, total U.S. beer sales fell one percent in 2018, whereas craft brewer sales continued to grow at a rate of four percent, reaching 13.2 percent, or 25.6 million barrels, of the U.S. beer market, according to the nonprofit Brewers Association, a national organization based in Boulder, Colorado.

By mid-2019, there were nearly 7,500 craft breweries in the United States, up 16 percent from mid-2018, and double the number of craft breweries from 2014, the Brewers Association states.

The same group reveals that craft breweries had a $3 billion impact on the Florida economy in 2018, although when measured per capita, the state ranked 44th in both craft brewery economic impact and number of breweries.

That means there is still plenty of room to grow not only on the Treasure Coast but throughout Florida, Nordquist says.

While representatives of all Treasure Coast brewers say they are growing, long-term success is not guaranteed. The Brewers Association shows that 77 brew pubs and 118 small breweries closed in 2017. 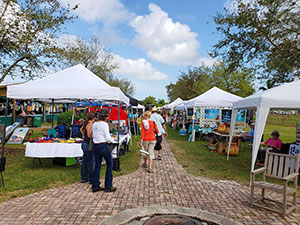 Among the most popular events scheduled at Summer Crush Winery are its art shows and its surfboard and classic car shows. SUMMER CRUSH

Most of the breweries are happy to host wedding receptions, company events and just about any kind of gathering.

She says the events held in association with sales of craft brews are limited only by one’s imagination.

“It’s starting to get to the point where wine is and has been for a long time,” says Mike Malone of Walking Tree. “People think of beer as this low-end product that you can’t pair with things. You can have a five-star meal and pair each course with a different beer. Restaurants are figuring that out that they can get 60 people to come to a beer dinner and pay 60 or 70 dollars a head to have a fantastic dinner.”

And don’t forget the annual Wiener Dog Races at Pareidolia for dachshunds. 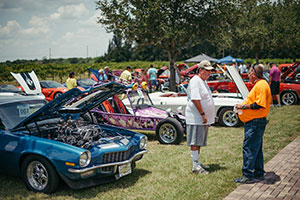 Every craft brewery on the Treasure Coast, along with Pierced Ciderworks in Fort Pierce and Summer Crush Vineyard & Winery in northern St. Lucie County, has a wide selection of games to play.
Craft brew pubs have these games because they are an alternative to the wide-screen TVs that dominate sports bars. “We want people talking with each other,” says Nordquist.

“All of our games can be played one-handed,” says Malone, meaning to keep one hand open for holding a pint. 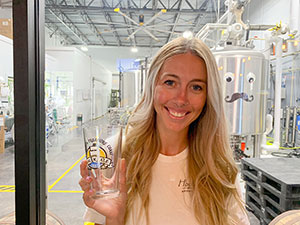 Alexis Ariail of Okeechobee, who bartends at the tap room at Hop Life in Port St. Lucie, holds a beer glass awarded to those who buy a beer, wine or cider at each of the dozen spots on the Treasure Coast Wine & Ale Trail. BERNIE WOODALL

The Wine & Ale Trail produces maps that show the locations of each of the participating businesses.

Also promoting local breweries is the Hop Passport, which lists 49 Florida breweries, including seven on the Treasure Coast, and stamps passports while offering discounts to its holders.
https://www.hoppassport.com/florida

MEMBERS OF THE TREASURE COAST WINE & ALE TRAIL, LISTED FROM NORTH TO SOUTH