John Jetson’s journey with the Highwaymen 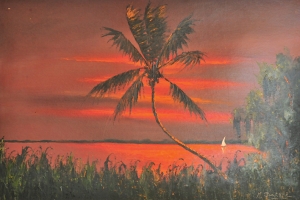 George Buckner of Gifford is considered one of the finest of the Highwaymen artist. This circa-1970s painting shows his early style before he became a more detail-oriented landscape artist. It was painted on Upson board, the wall board that many of the Highwaymen used instead of canvas. As Buckner began devoting himself more to his art, he began using canvas. 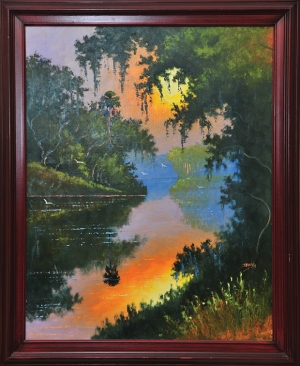 Johnny Daniels was a Fort Pierce Highwayman who was one of the youngest of the 26 inducted into the Florida Artists Hall of Fame. He began painting in his early teens, accompanied by his older brother, Willie. 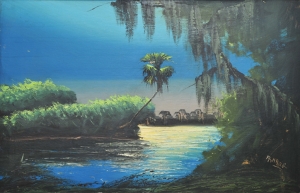 Alfred Hair was the young artist who turned painting into an enterprise, making pictures as fast as he could and sending out his friends to sell the paintings. He was killed in 1970 at Eddie’s Place, a juke-joint place on Avenue D. 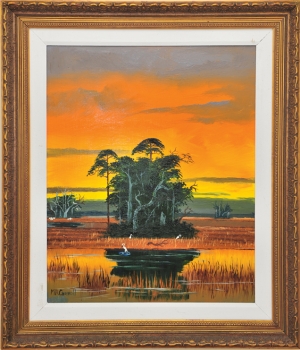 Mary Ann Carroll holds the distinction of being the only woman artist of the Highwaymen. She was also one of the early artists, learning from Harold Newton. This Everglades scene shows her use of brilliant color. 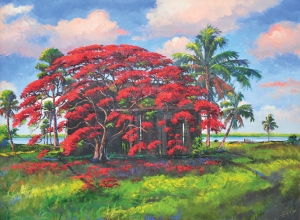 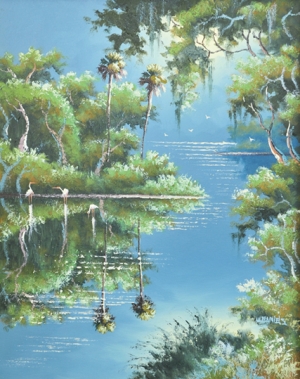 This painting by Willie Daniels, another Highwayman from Fort Pierce, shows how the artists often used the same subject matter.

Art and appliances may make strange bedfellows, but when it comes to the ongoing story of the Florida Highwaymen, selling paintings surrounded by washing machines and televisions doesn’t seem that unusual.

The Jetson TV and Appliance Center flagship store on U.S.1 in Fort Pierce has, in the past four years, become a mecca for followers of Highwaymen art. Its annual Highwaymen Show, along with other Highwaymen-oriented events throughout the year, attracts not only a majority of the artists, but thousands of followers from all over the state who can purchase their paintings or the books that have been written about their lives, watch them paint or talk to these living legends.

How John Jetson, the outspoken owner of what is now a local appliance and television empire, got involved with the area African-American artists who sold their tropical landscape paintings door-to-door is one of those stories that seem to be typical of buyers’ encounters with the artists in those early days.

Starting in the 1960s, and influenced by Alfred Hair, a young black man who had a natural gift as an artist and a salesman, a number of area men ― and one woman ― began making quickly painted landscapes that sold for $25 to $30. At a time when they could make only a few dollars a day working in the orange groves or tomato fields, they took the opportunity to make a fast buck by painting rapidly, putting out as many paintings as possible during the week and selling them on weekends, usually with the paint still wet.

They sold the paintings from their cars, looking for customers anywhere they could, going up and down U.S. 1 and across the state to sell. The Jetson shop was a natural stopping place for all of the artists.

BUSINESS DEAL
One of the painters was Harold Newton, a talented artist who had long given up work in the orange groves and had a successful career with his paintings on display in local banks and lawyers’ offices.

“That was back when leisure suits were cool,” recalls Jetson, 66. “And I had a baby blue leisure suit that was good-looking as hell. Harold had bought an air conditioner from me and he owed me $200. He gave me $100 and left two paintings. I went after him yelling, ‘You son of a b ― ’as he drove down the road. He just waved at me.”

Newton sped off, and then Jetson looked down at the paintings he was holding in his hands. Paint from the still-wet paintings coated his prized leisure suit.

Jetson admits that back then, he thought “I didn’t want his paintings. I thought they were ugly.” But as time went by, he began to amass a collection of paintings by the area artists, saying “I got to enjoy them.”

“I was on their route,” he says. “Back then, you didn’t buy them because they were cool. I was buying them because we were trying to help someone.”

FAMILIAR LANDSCAPES
He says he relates to the familiar landscapes and places in the paintings. “I’ve seen that,” he says as he points to a painting of the backwoods. “I’ve been there. It’s a little bit of my soul.”

Jetson came with his family from Lighthouse Point, Fla., to Fort Pierce in the mid-1970s. He was an air commando and served as a forward air controller with the U.S. Air Force in Vietnam for 17 months from 1968-1970. He opened the appliance store with his brother, Scott, in 1974.

The store has expanded to seven locations from Vero to Stuart, has 135 employees and outlasted 40 competitors, including national chains. He calls Fort Pierce at that time “the Wild West,” and owning those paintings that depict that unspoiled scenery “makes me feel good,” he says.

Over time, Jetson’s art collection grew to include a total of 174 Highwaymen paintings. Initially, they were displayed in the showroom, but then they were moved to the service department, replaced by some of the deep-sea fishing trophies the avid fisherman and boater has caught over the years.

Susan Harris, who works for Jetson in client relations, was already an avid Highwaymen collector and fan when she got an idea that caught fire. Harris, who was born in Manhattan and had just moved to Vero in the mid-1990s after years in Japan with her pilot husband, happened to notice a number of tropical landscape paintings at the office where she was getting her resume together.

“This woman had so many paintings, including Harold Newtons, the crème de la crème of the painters,” she says. “I was just enamored.” Although early collectors had begun calling the group of local artists The Highwaymen, she could still find the paintings in flea markets and yard sales. She made friends with many of the painters long before they were discovered and the newspaper articles, documentaries and books that brought them to fame were released. The Highwaymen were inducted into the Florida Artists Hall of Fame in 2004.

LARGE COLLECTION
When word got out that Jetson had a large collection of the paintings, Highwaymen devotees called to see the collection, which were tucked behind closed doors and not open to the general public. To give the public a place to view the paintings and since there was no local Highwaymen festival, Jetson and Harris held the first event at the Fort Pierce Jetson’s location four years ago.

Harris gathered many of the living Highwaymen to attend the festival. The artists were given display space in the showroom and weren’t charged anything. “I feel it’s a community service,” says Jetson, who hosted this year’s festival Feb. 28.

More than a thousand people showed up for the first festival, causing traffic jams. In the three subsequent years, the event has grown and rekindled the enthusiasm for an amazing chapter in African-American history. They’ve also given the artists a place to sell their paintings, since many still sell out of their cars or on the roadside.

Also displayed at the festivals is Jetson’s own collection, which includes a number of early paintings by artists who are deceased, including Alfred Hair, Harold Newton, Hezekiah Baker, Livingston “Castro” Roberts and, most special to Jetson, George Buckner. He has 26 paintings by Buckner, some of which he commissioned.

“Buckner was the finest artist,” says Jetson. Once, while Buckner was on his way to the Coconut Grove Art Festival, Jetson told him he would save him the trip and offered to buy all his paintings.

Jetson paid cash, causing Buckner to affectionately refer to him as “Mr. Green.”

“We became very dear friends,” says Jetson. “I knew when I met him. He was just one of those real people. A real gentleman. The finest man I ever knew.”

Once Jetson took Buckner to paint the Royal Poinciana tree in his family’s front lawn on Indian River Drive. Buckner stood in the midst of the branches for his painting, which Jetson owns.

“He was always looking, observing,” says Jetson. “He told me once, ‘I live in the clouds,’ meaning he feels them.”

Buckner’s landscape paintings are masterful, meticulous works. Sawgrass is depicted in his Everglades scenes by carefully applied brushstrokes. The hyacinths in water scenes are purple dots so tiny and exacting that the French Pointillist artists would have been amazed.

Jetson says Buckner’s precision impressed him so much he wondered if they were photographs.

“He took me back to where he painted,” he says. “He had paint brushes that looked like eyelashes. I said, ‘Let me see you do that,’ and he drew an egret. I didn’t want to offend him, but I wanted to make sure.”

Sometimes, when the delicate, painstaking work of painting was too much, Buckner would start another work and then go between the paintings. He continued working with his lawn service, Buckner Landscaping.

Jetson encouraged Buckner, even going with him to the first Highwaymen Reunion held in downtown Fort Pierce in 2001.

When Buckner died in 2002 of lung cancer at the age of 58, Jetson attended his funeral in Gifford. “It was really nice; they were all singing, but I don’t do funerals anymore,” says Jetson.

His own tribute to the Highwaymen is to continue the festivals that allow the artists to sell their paintings and to celebrate the 26 artists who truly represent one of the most colorful of artistic enterprises.