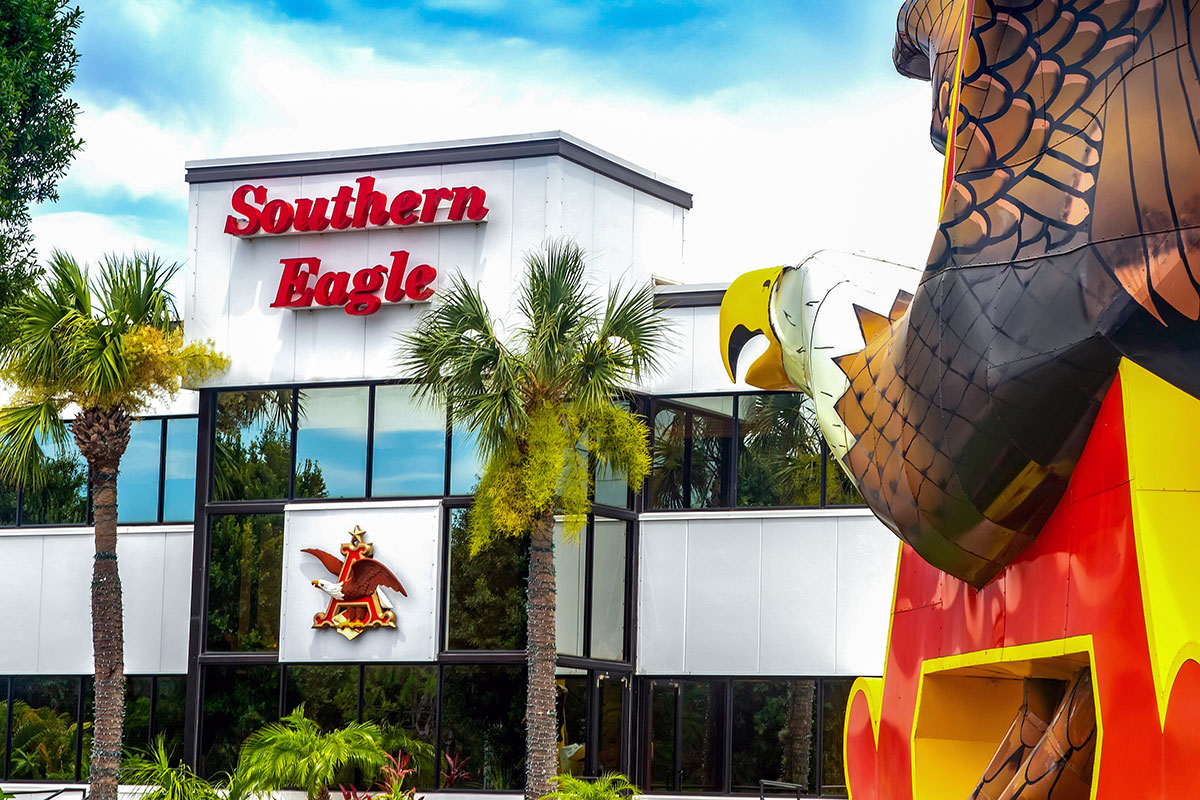 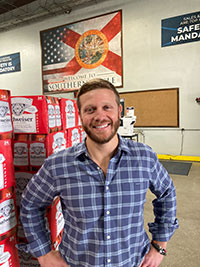 Philip Busch, a son of company founder Peter Busch, has taken over the helm at the family business. ANTHONY WESTBURY

Southern Eagle Distributing was founded in Fort Pierce in 1984, when Peter Busch signed a franchise agreement with brewing giant Anheuser-Busch to cover the Treasure Coast territory.

Starting with only 28 employees, Southern Eagle has grown exponentially since then. It has increased its market share of package beers by more than 73% and handles more than 50% of the draft beer market on the Treasure Coast, which includes Martin, St. Lucie and Indian River counties.

The company recently added 120 employees after acquiring Palm Beach County beer distributor Brown Distributing in December, bringing the number of its employees to more than 300. The vast majority of them operate out of the firm’s Glades Cut Off Road location in Fort Pierce.

The company, now run by Peter’s son, Philip, 39, still strongly emphasizes its family atmosphere and values. It does not operate like a big-city distributor, Philip and other top managers insist, and employees seem to appreciate this approach. Many have 10- or 15-year careers with the company.

“We should all try to do what is best for our community in which we live,” Philip wrote on the company website.

“It’s important to foster growth and give back to the very people who help our business survive.” 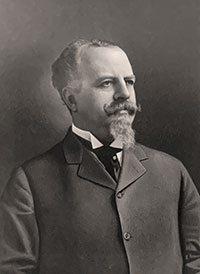 ALL IN THE FAMILY
For Philip Busch, who comes from a long family line of beer luminaries, it’s all about family. And what a family.

Philip’s great-great-grandfather, Adolphus Busch III, took a solid regional brewing operation in St. Louis and blasted it into the stratosphere. In the course of his career, Adolphus built 18 breweries in cities across the country and created America’s first national beer, Budweiser.

It’s interesting to hear from Philip that Adolphus never liked the taste of beer; he preferred wine. He discovered a small brewery in Czechoslovakia that produced a light pilsner beer called Budweiser.

Adolphus pioneered pasteurizing the product so it could be shipped long distances and he started using refrigeration for the first time.

Philip has been president of Southern Eagle for 10 years. And while Peter is still available for business advice, Philip says it is his show now. He has always wanted to work in the beer business, which he describes as multifaceted, interesting and exciting.

Philip clearly recalled his father’s 40th birthday celebration. Peter borrowed a friend’s mega yacht and threw himself a lavish party for 500 guests. During the party, Philip took the microphone to announce to the world that he really wanted to be part of this exciting business and how he couldn’t wait to take over. He was 12 at the time.

He is one of six siblings, but the only one to take a consistent interest in the company.

“It’s the perfect industry to stay engaged,” he said, “You’re always learning new things. It keeps you on your toes.” 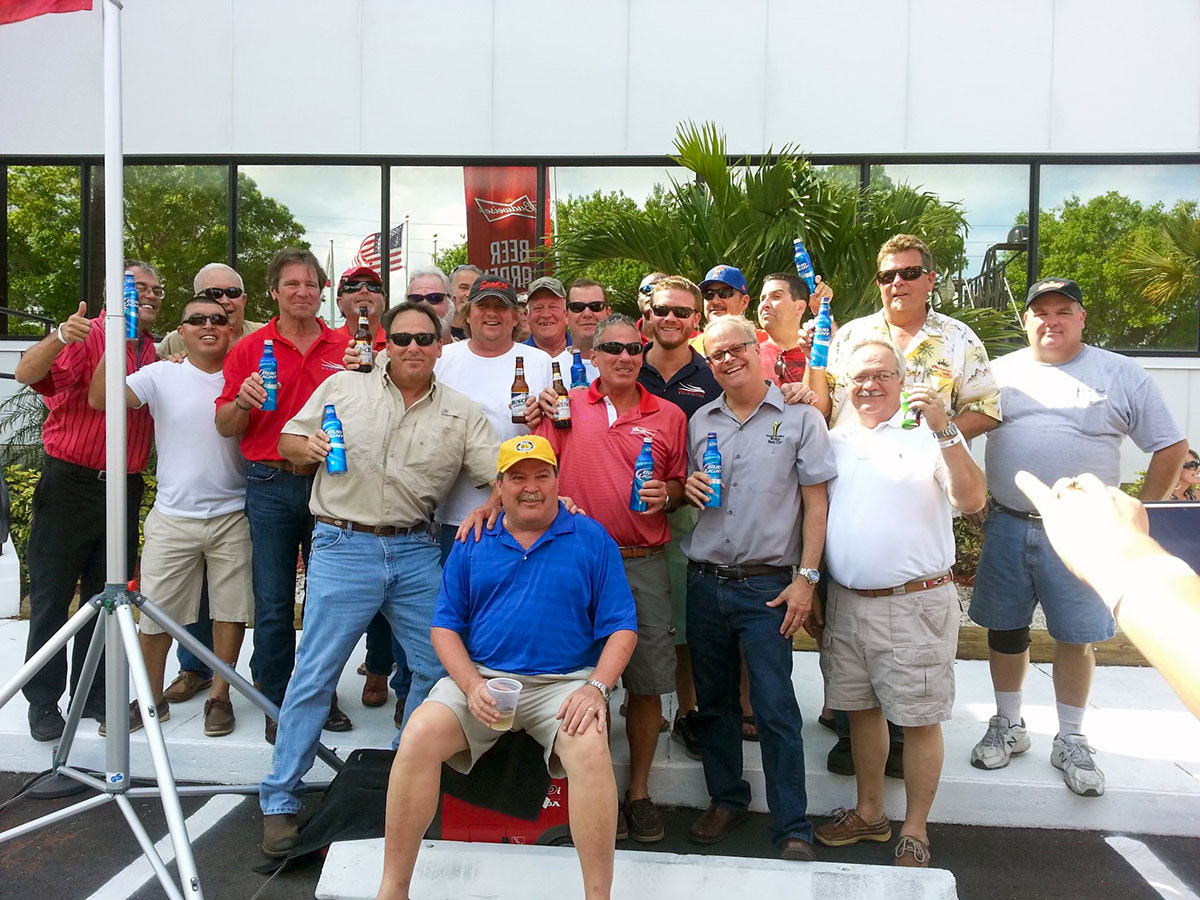 Southern Eagle employees and owners gather to celebrate 30 years of business on the Treasure Coast. 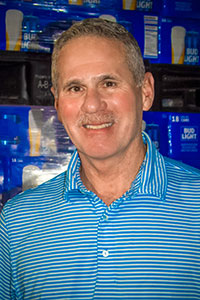 BOLD BUSINESS MOVE
Philip and his chief financial officer, Paul Trabulsy, 61, have spent a lot of time recently on their toes. Since August, Southern Eagle had been negotiating for a bold and perhaps daunting business opportunity that concluded with the purchase of Brown Distributing.

Beer distributors form one-third of the chain of beer delivery [from brewers to distributors to retailers, including bars, restaurants and grocery stores]. Anheuser-Busch dictates strict franchise territories for individual distributors as a way to encourage competition and to keep such lucrative companies in as many hands as possible.

Coincidentally, on the very same day in 1984 that Peter Busch took over the Treasure Coast franchise, Brown Distributing signed to take on distribution in Palm Beach County. Last year the ownership of Brown decided it was time to sell the business.

Brown had aggressively been buying up the distribution rights to dozens of small craft breweries since the early 2000s. Craft beer reached its peak in popularity between 2008 and 2009. Many of these small breweries were outside the traditional Palm Beach County territory. When it came time to consider selling the company, Brown had to divest itself of the out-of-town and out-of-state craft brewers — all 48 of them.

Sale prices of distributorships are a closely held secret in the industry, Philip and Trabulsy both said. But Philip did indicate he estimates that Brown received “north of $300 million” for the rights of the small breweries. 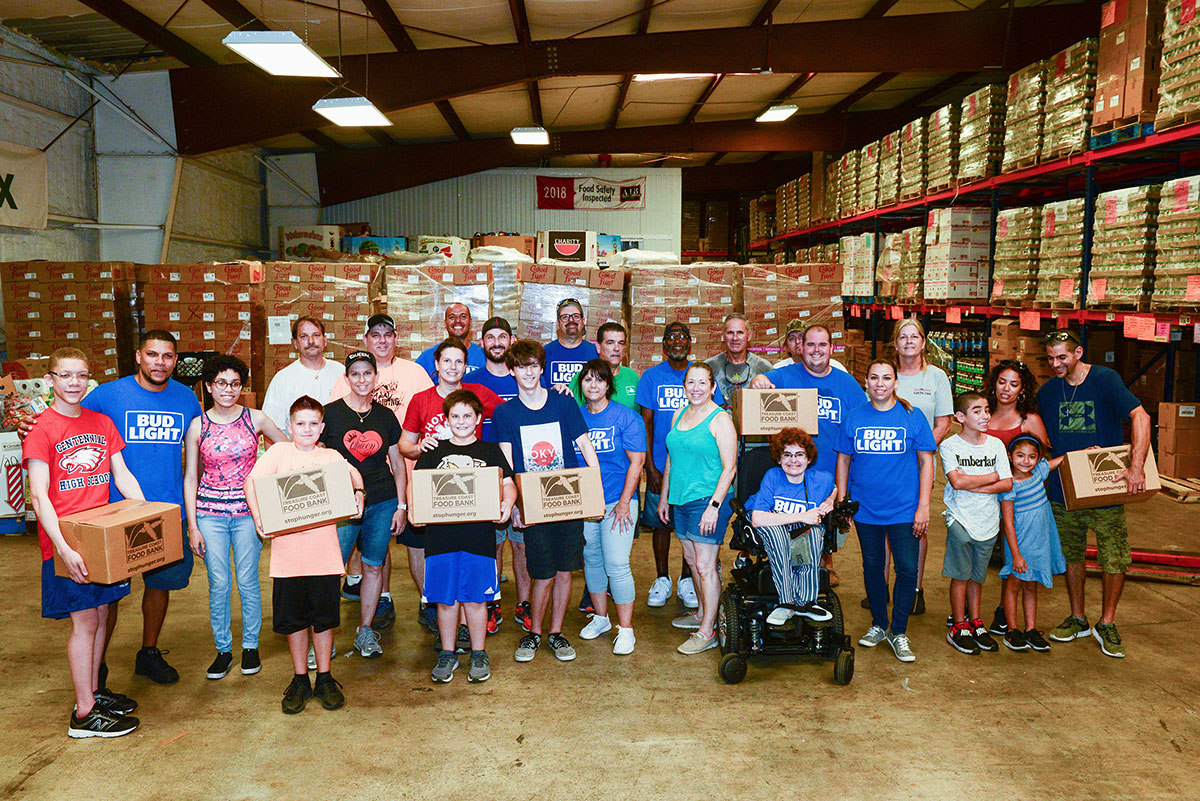 PREMIUM PRICE
Philip is wary of disclosing the price Southern Eagle paid for Brown but did admit the company paid a premium for the Palm Beach company. The assets of Brown south of Palm Beach County were purchased separately by the country’s largest beer distributor, Reyes and Company, for “several hundred million dollars,” according to Trabulsy.

Trabulsy and Philip said they would have loved to have taken over the entire Brown operation but it would have left them really financially stretched.

With the purchase of Brown, another 120 people were added to the company’s payroll, Philip said. Most are delivery drivers who make the daily commute from their Palm Beach County homes to the Fort Pierce warehouse. Southern Eagle has retained a small salesforce with an office in West Palm Beach to service accounts there.

Philip made a point of talking individually with every driver who came with the acquisition. That was a big contrast with the more corporate approach taken by Brown management. Several 10-year employees admitted they’d only seen their previous bosses once or twice during their careers. 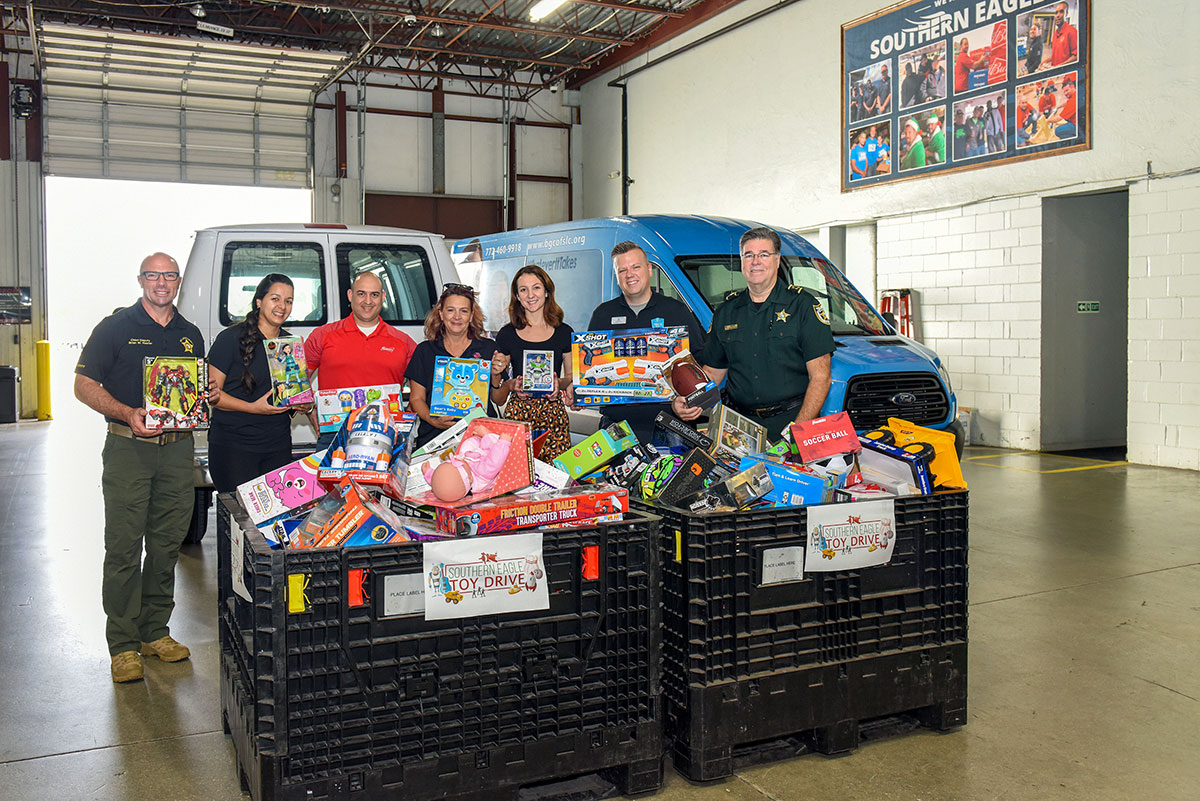 OPEN DOOR FOR ALL
By contrast, Philip maintains an open door policy toward all his employees. That fosters a sense of camaraderie and a family atmosphere, he believes. Southern Eagle holds several big company parties, picnics and even a rodeo every year for
its employees.

Retaining Brown drivers after the merger was crucial, Philip said. He pays them $500 a month for daily travel time and has boosted the wages of his existing and very loyal group of Fort Pierce drivers. Average salaries range from $50,000 to $75,000 a year, not including frequent performance and retention bonuses.

Philip pointed out the national shortage of CDL drivers and how other distributors such as food companies routinely pay $100,000 a year or more for a 6-day week. He said Southern Eagle is working toward a four-day, 10-hour day week for most drivers, which is a popular move.

“I have a real strong passion for my people,” Philip said. “They count on me. Life’s too short to work for an *******. You can achieve results without being an overbearing, numbers-driven person, that’s not real.”

Philip, as does his father, believes in supporting local nonprofits and community causes. While Peter is geared more toward environmental causes, Philip concentrates on helping the less fortunate in society. He has particular fondness for the mission of the Boys & Girls Clubs.

“In the 12 years I’ve known Philip, he’s been a loyal supporter of Boys & Girls Clubs not just financially — which we really appreciate — but he also has great ideas, like our Learn & Earn food truck,” said Will Armstead, CEO of Boys & Girls Clubs of St. Lucie County. “His family foundation was the first to invest in the food truck for our Teen Workforce Readiness program.” 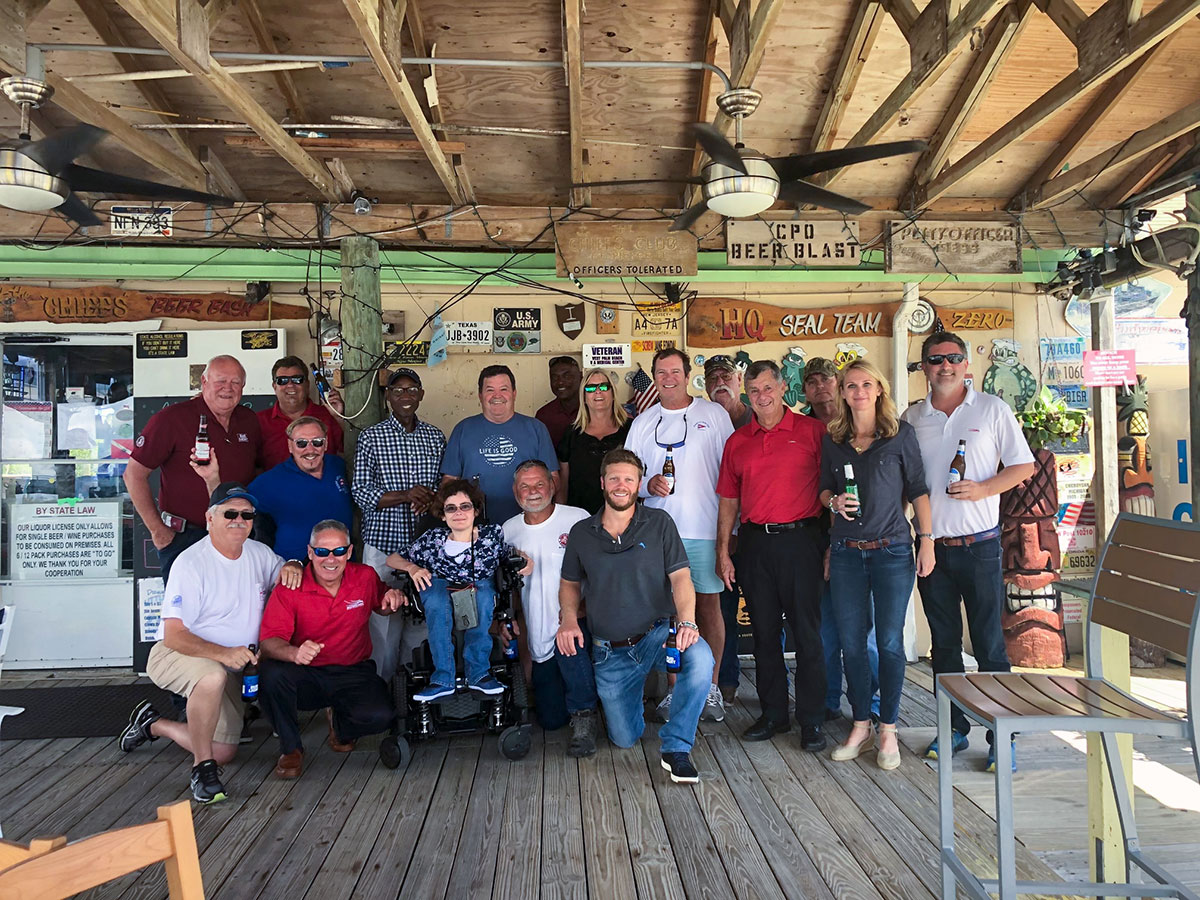 Gathering of many retired and current Southern Eagle Distributing employees at Little Jim’s Bait & Tackle to celebrate all of the great times together.

RIGHT TIME TO GO
Philip said he feels fortunate his father decided to step away from the business in 2012 and hand the reins over to him. He said the Anheuser-Busch family has seen too many difficult transitions between different generations.

“My father legitimately walked away,” Philip said. “He wanted me to figure it out on my own. We do financial reviews together and he is available for annual budgeting. He’s up to date with the big picture about the company, but I handle all the day-to-day operations. I feel we are partners.

“I did ask for his advice over the Brown transaction because it was such a big undertaking for us,” Philip continued. “We made a lot of obligations to our bank, so projections of future business are even more important. Now it’s a new business, with new retailers. Everything is different.”

The Busch family recently welcomed a fifth child into the world. Philip has two girls, 14 and 12; and three boys, 7, 2, and 8 weeks. He said he’s particularly close to the girls.

“I encourage them to have a passion for working,” he said. “They need to apply themselves. In the back of my mind I see I could use an attorney and an IT person in the future, so I’d welcome them into the company in some capacity. But I’d require them to first work for another distributor and learn the ropes somewhere else.”

The Busch family business seems poised to stretch for another generation soon. That’s fitting for a company whose motto is “Making friends is our business.”