When will Treasure Coast economy, employment be back to normal?

As he makes presentations from his office in Tallahassee to virtual audiences asking about the coronavirus pandemic’s impact on the Florida economy and unemployment rate, Jerry Parrish always gets two questions: What signs do we look for to show life is returning to normal, and, when will be normal? 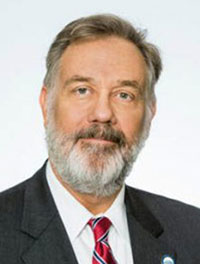 Dr. Jerry Parrish is the chief economist and director of research at the Florida Chamber Foundation.

The chief economist and director of research at the Florida Chamber Foundation said his responses are also always the same: When college football games are played; and when an effective, widely available treatment for COVID-19 is found. Parrish, a bachelor’s and doctoral grad and football fan of Auburn University, expects a treatment this fall followed by a vaccine sometime in 2021.

A virus treatment will allow people to be more comfortable risking restaurants, offices, schools and other indoor activities and allow more of the nonworking to find jobs. Once a modern-day Jonas Salk makes a viable vaccine, normality will reign, Parrish said.

Until then, expect higher-than-normal unemployment rates on the Treasure Coast and in Florida, which in June, along with Arizona, were poster children of virus spikes.

The state Department of Economic Opportunity agrees, in so many words.

“The direction of the unemployment rate, as well as many other economic indicators, will depend largely on how the public health situation develops over the upcoming months,” said Paige Landrum, the agency’s press secretary.

VIRUS HIT AT HEIGHT OF SEASON
When the virus’ impact hit businesses on the Treasure Coast, leading to the highest unemployment rates across Florida since the Great Depression of the 1930s, it was the high season for visitors, lifeblood for many businesses.

That compares to Treasure Coast unemployment rates of 3.5% for February, the last full month without significant virus affect, and 3.6% in May 2019.

The hardest hit in Florida and the Treasure Coast were restaurants, bars and hotels, mainly because of operational restrictions, but also because snowbirds didn’t flock to Florida after mid-March.

“Our restaurant got shut down for our two best months of the year, March and April,” said Joe Zebrowski, general manager of the Dockside Inn & Resort on the Fort Pierce Inlet on South Beach. Its on-site restaurant is On the Edge Bar & Grill. The Dockside also has about 40 hotel rooms and a marina with 65 boat slips. 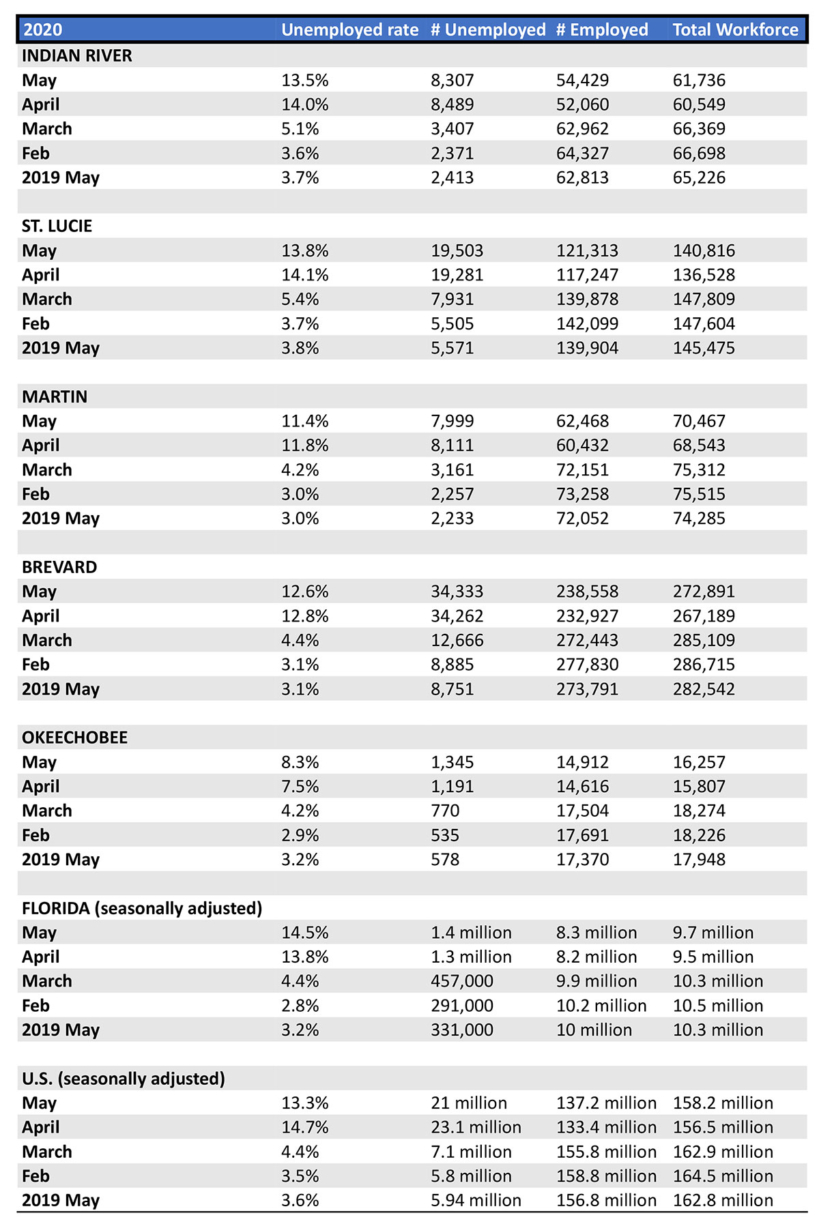 PPP KEEPS WORKERS EMPLOYED
During the restaurant’s shutdown from late March to early May, Zebrowski furloughed about 30% of Dockside’s 40 workers but was able to rehire all of them thanks to a loan from the federal Paycheck Protection Program designed to keep people working.

Dockside has been more fortunate than most restaurants in the area, Zebrowski said, because the marina and hotel were often at or near capacity as South Floridians fled the Miami and Fort Lauderdale area where restrictions were more severe than for the Treasure Coast. Also, Dockside already had a food truck, which it kept on site. Its restaurant made about a quarter of its normal business despite the shutdown.

June unemployment figures in the area are expected to continue to improve, but that depends in part on how the U.S. Bureau of Labor Statistics conducts its monthly surveys, labor analysts said.

There have been claims that portions of the survey were not conducted properly in April and May, which lowered the unemployment rates, and that an adjustment could hike those rates. Still, the sense of business is that without another spike in virus cases, improvement will continue.

Amid the optimism, Zebrowski cautioned that “it is still difficult water to navigate. They took our barstools away the other day,” referring to the state’s late June move to shutter bars for the second time in the virus era.

Data issued in June by the state shows that the share of workers in the leisure and hospitality industry was 15.4% in Indian River County, 15.2% in Martin, and 12.8% in St. Lucie.

HOSPITALITY INDUSTRY SUFFERS
Of the Treasure Coast workers who defined the industry they work for when filing for unemployment benefits, now termed by state officials as Reemployment Assistance, about 24 percent were in accommodation and food services.

Statewide, there were 792,500 workers in the leisure and hospitality category in May, down 37% from May 2019. Four in five of those employees work in hotels and restaurants, a segment that fell 35% from a year earlier, the rest in arts, entertainment and recreation, which was down 42%.
Nearly all of the clients of CareerSource Research Coast want help finding a job. In February, the number of clients seeking job-finding assistance was a fraction of that, largely because unemployment rates along the Treasure Coast were at historic lows, said Tonya Woodworth, CareerSource spokeswoman.

Florida counties with the highest May unemployment rates, Osceola, 31%, and Orange, 23%, have Kissimmee and Orlando and Disney World, and are more reliant on out-of-state visitors than most areas, Parrish said.

CONSTRUCTION NOT AS ACUTELY AFFECTED
In the most recent available report for May, construction was the only major category of Florida workers to show a year-on-year gain, a modest one of 0.9 percent, an increase that surely would have been higher without the virus, Parrish said.

Many of the statewide strictures that hemmed in many business sectors did not apply to construction, and major construction projects are planned months in advance, therefore not immediately reliant on disposable income of consumers, said Landrum of the Florida DEO. Plus, said Parrish, construction road crews took advantage of the paucity of traffic to make repairs and make new roads.