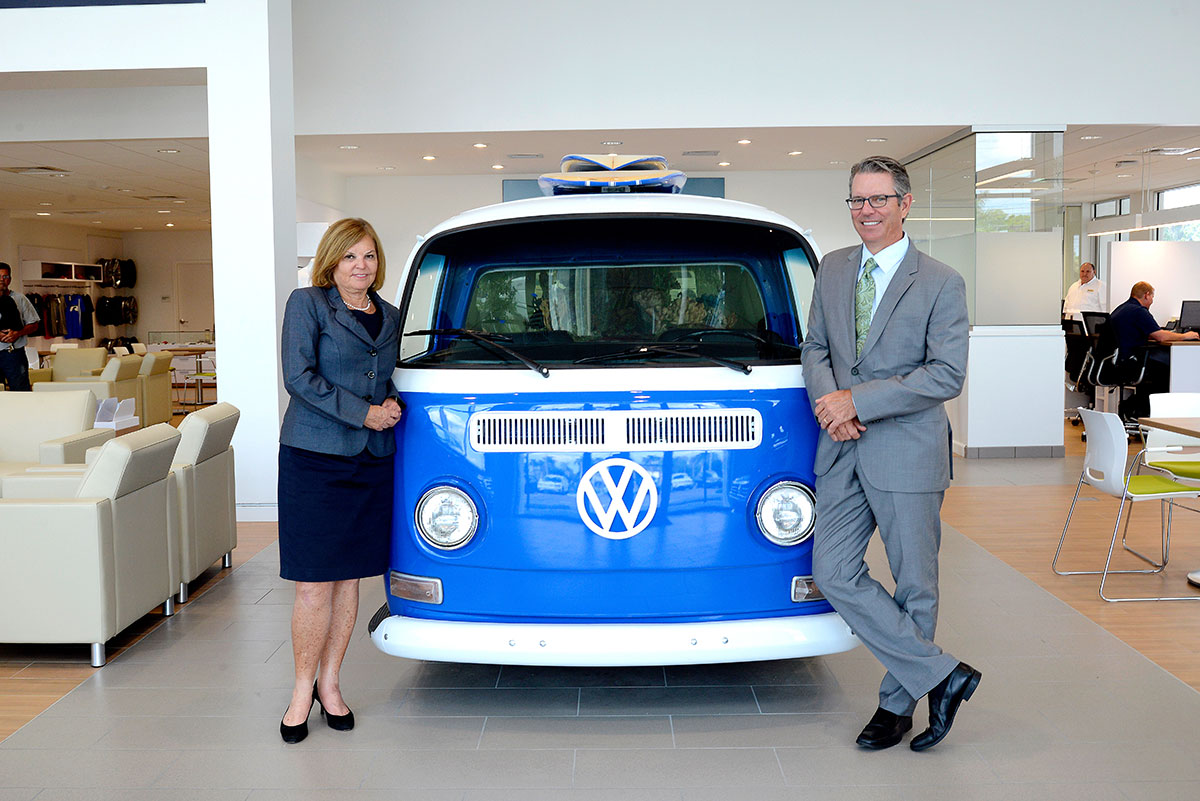 Sunrise Volkswagen of Fort Pierce, the newest VW dealership in the United States, opened in February right next to the oldest dealership in town, 87-year-old Sunrise Ford.

The sparkling new VW store south of Midway Road on U.S. 1 opened with 20 employees and 135 new models, from Passat and Jetta sedans to three-row Atlas SUVs. Most of Volkswagen’s U.S. dealer network has filled out, meaning that a new franchise is rare. About 30 companies, most of them with established VW dealerships, vied for the open “point” on the Volkswagen U.S. map.

In the end, it was Sunrise Motor Vehicles Inc., doing business as Sunrise Volkswagen of Fort Pierce, that won over the German carmaker, which is No. 1 in global auto sales.

It took more than two decades for Mary Jo Tierney, the owner of Sunrise Ford as well as the new Volkswagen dealership, to navigate the arduous path of landing and opening a new foreign car dealership to complement the American cars, trucks and SUVs Ford makes.

Since the mid-1990s when 6.5 acres of undeveloped land next to the Ford dealership was purchased, “Our long-term goal was to get another franchise over there,” says Tierney. “Then we had the recession and other issues, so we put it on hold.”

Tierney’s husband and business partner is Michael Wetzel, who is also vice president of both dealerships.

The duo at one point considered expanding outside Fort Pierce, and they put in an eventually unsuccessful bid for a Honda dealership in Estero, near Fort Myers.

Tierney wrote to Volkswagen, Toyota and Honda to see if any of them were considering a new franchise in the Fort Pierce area. Only VW indicated the company was considering it.

So, Tierney worked the phones to Volkswagen of America. She had given up a successful journalism career to work at Sunrise Ford and was well-known among Treasure Coast newsmakers for her inability to take ‘no’ for an answer.

Once VW decided that there was enough potential business for a new dealership on the Treasure Coast, Tierney and Wetzel intensified courting Volkswagen executives. New “points” to the dealership network are so sought after because the new owners avoid high costs of purchasing an existing dealership. VW narrowed the field of 30 to three, and then in 2012 chose Sunrise Volkswagen of Fort Pierce. 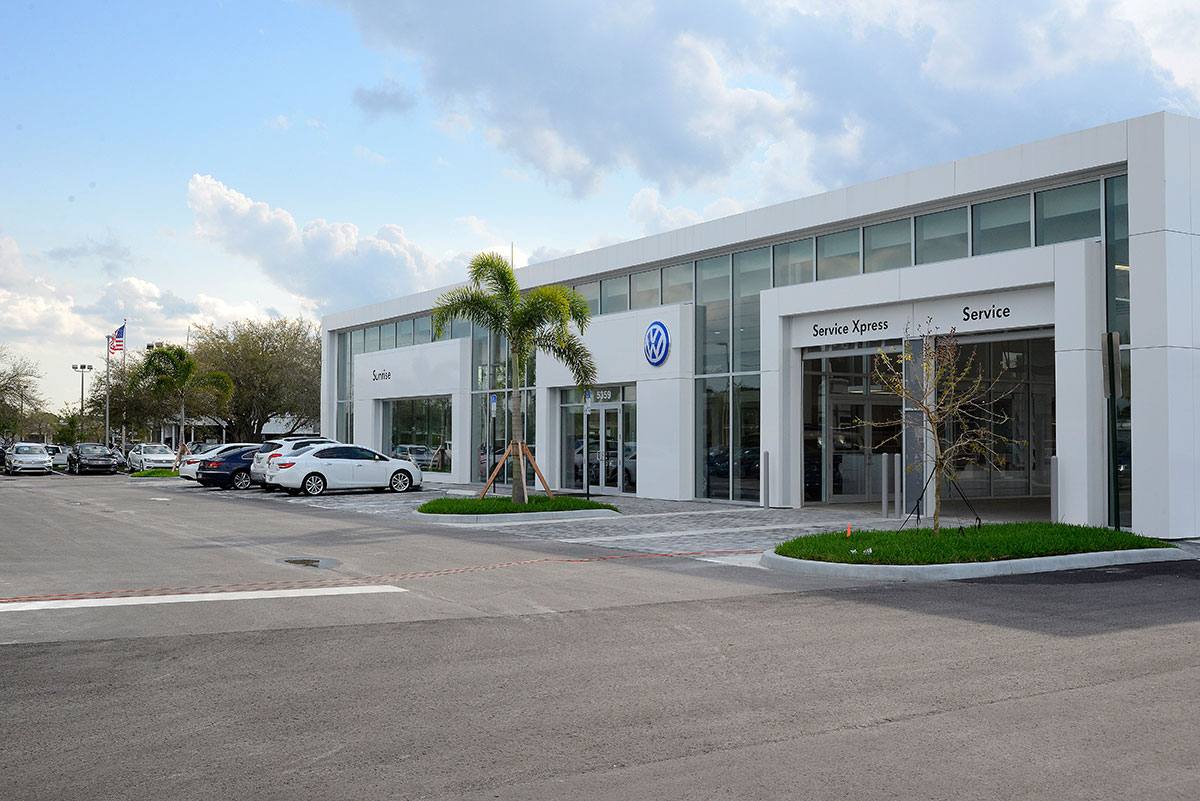 The sparkling new Sunrise Volkswagen of Fort Pierce opened in February. The dealership sells new VWs and used vehicles of many makes. It has 13 bays for servicing cars, trucks and SUVs.

Tierney and Wetzel expected the new dealership to open in 2014, but a VW dealer sued Volkswagen to nix the Fort Pierce dealership. The suit was settled, but only after Tierney agreed to delay the opening until 2019.
That was perhaps a serendipitous event. Every year the dealership was delayed, costs rose, but the stall also meant Tierney and Wetzel avoided the expense and mess that would have been created by operating a new VW store amid the company’s diesel emissions scandal that began in 2015 and has largely been worked through by now.

Volkswagen in 2018 was one of the few major automakers to register a gain in U.S. sales, rising 4.2 percent.

As for Sunrise Ford, its sales of more than 1,600 vehicles was down 0.5 percent last year, better than Ford Motor Co.’s domestic sales, which fell 3.5 percent. 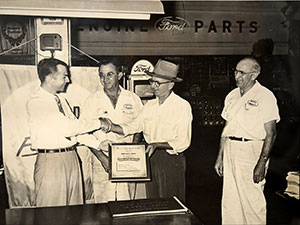 James W. Sneed, in hat, in front of the parts department at Sunrise Ford at its first formal location on U.S. 1 near downtown Fort Pierce.

The cost to open Sunrise Volkswagen of Fort Pierce will end up being between $7 million and $8 million, which is about twice as much as the couple expected when their quest began.

Tierney says she has many sleepless nights wondering, “Will they come?” to the new dealership. There is also the Trump administration’s consideration of imposing tariffs on imported vehicles and auto parts. The president received a study from the Commerce Department on its economic effects in mid-February, just as Sunrise Volkswagen of Fort Pierce was opened. Volkswagen makes the Atlas and Passat in Tennessee, but most models are imported.

On the other hand, debt is not a worry. Tierney and Wetzel opened the new dealership without debt.

“We’re not under the gun so much, and it gives us some flexibility to give the best deals to customers,” says Tierney. “We can be very, very, very competitive because our overhead is not as much as some dealerships which could have a high mortgage. That also gives us the room to spend more for advertising.”

Volkswagen initially wanted to put a new dealership in Vero Beach, Wetzel says. The nearest VW dealers are Stuart to the south and Melbourne to the north.

“We told them that Vero’s a tough car town,” says Wetzel, who joined Sunrise Ford in 1990 after working at several other area dealerships. “The brands are here (in Fort Pierce). The only brands that aren’t here are Audi and Infiniti. They did the research, called us back, and said, ‘You are right.’”

Most everything at Sunrise Volkswagen of Fort Pierce is sparkling new. But a showroom centerpiece is a Baby Boomer icon, a 1970 VW bus that took three months to refurbish. That’s eye-catching enough, but then Wetzel got a Fort Lauderdale maker of aquariums to fit an 800-gallon-plus saltwater tank into the bus behind the front seats. The venture was cool enough to be featured on the season premiere of the National Geographic Channel’s Fish Tank Kings in 2013.

FROM THE TRAIN TRACKS 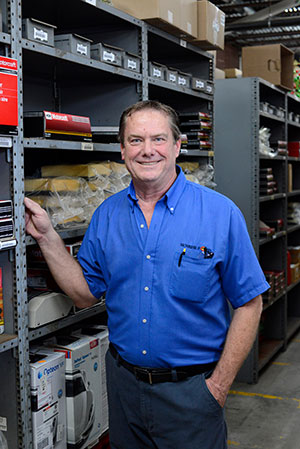 Jeff Sneed, son of Jimmy Sneed who owned Sunrise Ford until his death in 1994, stands in the parts department of Sunrise Ford, where he has worked for 36 years and is assistant parts manager.

Jeff Sneed has been working at Sunrise Ford since 1983. He is now an assistant manager there. His father, Jimmy Sneed, was the second-generation owner of the dealership that his father, J.W. Sneed Sr., took over soon after its founding in 1932.

Jeff Sneed says that before a building was secured for the original Sneed dealership, cars were simply lined up for sale along the railroad tracks that run still between U.S. 1 and Indian River Drive near downtown Fort Pierce.

At the start, Sunrise Ford sold tractors and the Model T, even pumping gas near the western foot of the Citrus Avenue Overpass.

Sunrise Ford moved in the 1960s to U.S. 1, north of Fort Pierce near Taylor Creek, when many expected the growth to be between Fort Pierce and Vero Beach. Jimmy Sneed took over when his father died in the early 1970s.

Several years before Jimmy Sneed died in 1994, Sunrise Ford moved to its present location on the southern side of Fort Pierce, in the direction of Port St. Lucie.

Tierney, married to Sneed, became the dealership’s owner when her husband died.

At the time, a woman dealer was an exception. Ford Motor Co. told Tierney that it had a buyer to take over, she says.

“I don’t think Ford was very accepting of me to begin with, but I dug in my heels and said, ‘Yeah. We can do this,’” she says.

“Mary Jo is not shy,” says Jeff Sneed. “She tells you like it is, and that’s what she did.”

Tierney and Wetzel have been together for 24 years. They married seven years ago, and they have deepened Sunrise Ford’s long tradition of donations to charities, including the Indian River Lagoon, the A.E. Backus Museum & Gallery and veterans’ groups.

Before she became a car woman, Tierney was a newspaper journalist, and she still sometimes writes a thought-provoking blog that reads like a well-informed columnist. Tierney grew up in Fort Pierce, went to the University of Florida, including attaining a master’s degree in journalism. Then she returned to Fort Pierce in 1977 and worked at the Palm Beach Post and the Miami Herald. 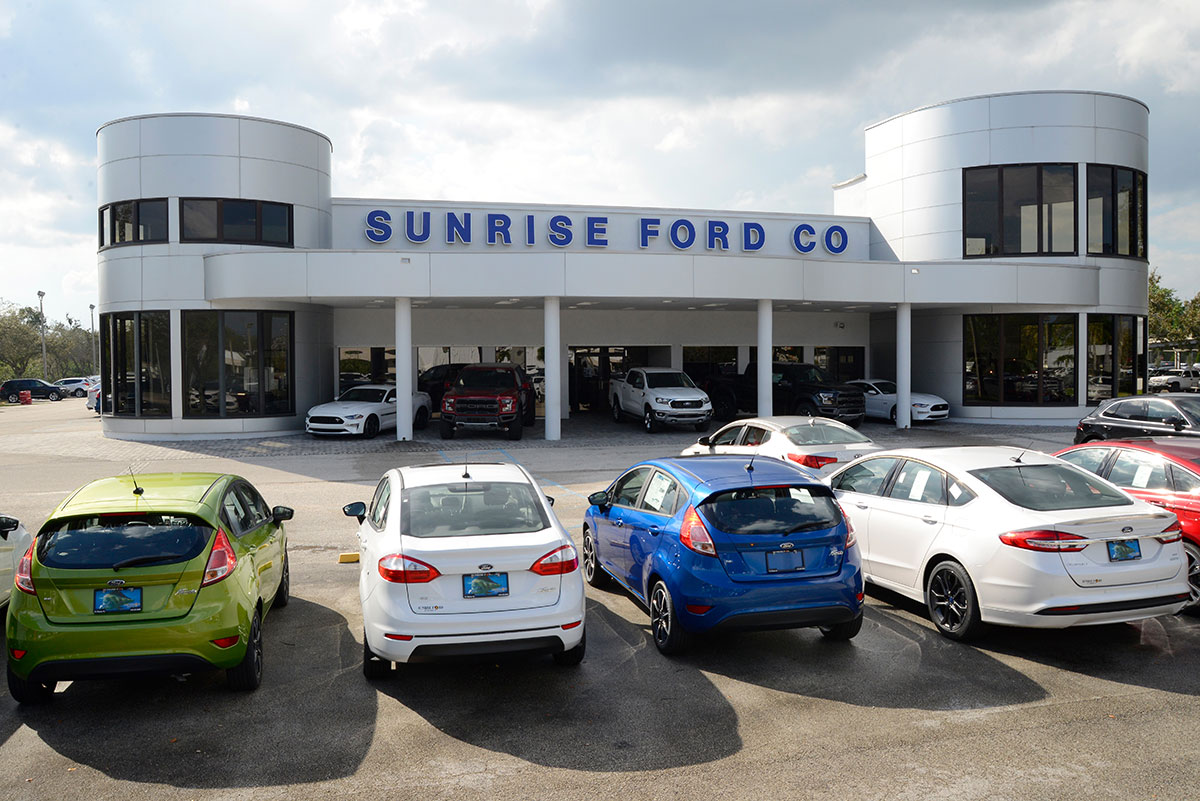 REPORTING SKILLS
“Mary Jo was absolutely one of the greatest reporters I’ve worked with in my journalism career,” says Peter Vilbig, a longtime reporter and now an English instructor at New York University.

Vilbig sat next to Tierney at the Miami Herald’s Treasure Coast bureau in the mid-1980s. That was during better financial times for American newspapers, when the Herald tried to take over the Treasure Coast, employing more than a dozen reporters, editors and photographers, based in Fort Pierce.

“When I got there, Mary Jo was obviously the spark plug of that office. She just had a nose for news,” says Vilbig.

Vilbig recounted that for several days in the news bureau, he witnessed “a master class in journalism” as Tierney and another colleague, Nancy Laughlin, worked the phones to track a white supremacist with ties to the Treasure Coast who was suspected in the murder of a Jewish disc jockey killed in Denver in 1984.

“I sat in awe as (Tierney and Laughlin) called the FBI to tell them that they had located the guy,” says Vilbig. “They cracked the case.”

Routinely, when Tierney was fishing for news, she opened a call with a source by saying, “What’s the dirt today?” according to Vilbig.

“She was aggressive, but she was always just as nice as she could be,” says Vilbig. 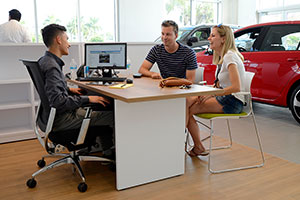 Sunrise Volkswagen of Fort Pierce is not the first VW dealer to locate in St. Lucie County. Coincidentally, the Miami Herald’s bureau in Fort Pierce was located on the former site of Fort Pierce Volkswagen, on Okeechobee Road, owned in the 1960s by none other than Jimmy Sneed.

Jeff Sneed says he remembers his father wishing he had kept the dealership once gasoline prices about doubled during the 1973 OPEC oil embargo, and the only gas-sipping small car Ford had was the much-maligned Pinto.

In the late 1980s, Tierney and Sneed had a baby girl. Perhaps it is not a coincidence that Tierney Sneed is now a hard-charging reporter covering the White House for the Talking Points Memo website. In her thumbnail biography on Twitter, Tierney Sneed states, “Florida woman at heart. Tell me your secrets.”