PORT ST. LUCIE – In 1979 it took days or weeks to communicate via traditional mail, computers were still considered futuristic, and Kathy Post watched her dad roll his desk and rotary dial telephone next to the piano in their living room to start Post Insurance. 40 years later, communication happens instantly, computers fit in the palm of our hand, and self-driving cars are on the horizon. One thing that hasn’t changed with these emerging technologies is the family atmosphere of Post Insurance and their commitment to integrity and personal relationships with customers. Today Kathy Post is Owner and President of Post Insurance and that once twelve-year-old girl who watched her dad fulfill his dream of helping others, continues their legacy while embracing innovation for the next generation. 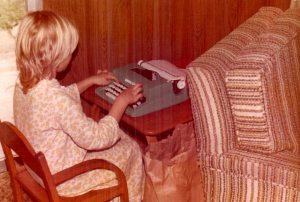 On the eve of their 40th Anniversary Celebration, Kathy Post sits with her dad and retired Founder, Bob Post, flipping through scrapbooks. “I love this picture,” she says warmly as she pauses. “You can see me in my pajamas at 12 years old typing labels for file folders, the wood paneling on the walls, and the green and orange furniture in our living room. It’s so 1970’s,” Kathy laughs.

Her dad recalls that time vividly too. “It was 1979 when I decided to go into business for myself. I was 35 years old and my wife, ‘Butch’, and I both had three kids; all under age 13,” says Bob. “It was a big risk. My job as a claims adjustor was stable and secure. Any parent today can tell you giving all that up for the unknown is scary.”

Bob’s drive to start his own agency came from a desire to help. “Every claim, no matter how small, is a disruption in your life,” Bob shares. “I’d see people suffer additional hardship after a house fire or car accident because they didn’t choose the right insurance. I started Post Insurance to help others avoid making the same mistakes.”

Kathy enjoyed seeing the relationships her father built with his customers. She knew she wanted an insurance career right out of high school so she worked full-time as a licensed agent while earning degrees in Business from Indian River State College and Barry University. At the time of its founding, Port St. Lucie was a small town with a population of just under 15,000. Now its population hovers around 200,000 and is among the fastest growing cities in Florida.

Like Port St. Lucie, Post Insurance has grown too. Today Kathy, and her sister, Becky Post, manage a team of 14 with departments for business, residential, and life insurance. Their office occupies the entire first floor of their 7,000 square foot office building in St. Lucie West, and they represent companies with established reputations like Nationwide, Tower Hill, The Hartford, Travelers, Safeco, and Progressive. Their award-winning agency serves businesses throughout Florida. With clients in 33 states and seven countries, they are a true success story garnering local, state, and national accolades because of their deep commitment to civic, non-profit, and faith-based organizations.

Despite their growth, they remain true to their roots as a local, family business. Long-time client Debbie Porter says, “My parents were insured with the Posts growing up, so it was natural for me to call them when I started my own family. Now my oldest is in college, and he’s insured with them. In our ever-changing world, there’s something special about this kind of continuity.”

The value of establishing a time-tested relationship with an agent you trust can be significant. Just ask Chief Jeff Ross, President of Port St. Lucie Volunteer Ambulance. “I don’t know where we’d be without Post Insurance,” Chief Ross says. PSL Volunteer Ambulance, a non-profit relying solely on donations, provides free ambulatory transport to area hospitals and medical appointments. “Our ambulance was totaled after we were rear-ended. Post Insurance gave us a check for $55,000. If it wasn’t for them, we wouldn’t have been able to replace it. Post Insurance literally saved the day for us and hundreds of residents of Port St. Lucie,” says Ross.

Post Insurance is grateful to all the wonderful people who have made the agency a success and they want to share their 40th Anniversary with the entire Treasure Coast. The public is invited to attend SafetyFest on Saturday, April 27th at First Data Field in St. Lucie West from 9 a.m. to 2 p.m. This free, fun, family-friendly event showcases area First Responders and gives children a chance to climb onto a fire truck, see K-9 units and SWAT teams in action, and forge a friendship with the first responders whose mission it is to keep them safe. Post Insurance, who represents Nationwide Insurance, will introduce your family to the official No. 88 Nationwide Camaro ZL1 Show Car and you can try out the racing simulator, games, and prizes.

If you can’t make it to SafetyFest on April 27th, you’re invited to stop by the Post Insurance office at 146 NW Central Park Plaza in St. Lucie West during Appreciation Week, April 22 – April 26, for a slice of anniversary cake as a small token of our appreciation for 40 years of friendship. Visit www.insurewithpost.com, www.slcsafetyfest.com, or call 772.878.8184 for more information.

This article was distributed through Treasure Coast Business, a news service for the readers and advertisers of Indian River Magazine.