FORT PIERCE — The 550 people attending Frank Sinatra Jr.’s concert at the Sunrise Theatre March 10 got a rare glimpse into the life of his iconic father and what it was like growing up in his shadow. They also saw one of his last performances.

Sinatra, 72, died Wednesday at a Daytona Beach hospital after an apparent heart attack. His death came less than a week after he performed a celebration of his father’s music at the Sunrise Theatre in Fort Pierce.

“We talked for about a half-hour in the dressing room after the show,’’ said John Wilkes, executive director of the Sunrise Theatre, who had known Sinatra when Wilkes was director of the Van Wezel Performing Arts Hall in Sarasota. “He was a fascinating man. He seemed in good health. There were no signs of him being ill at all.’’

Sinatra was on a multicity tour called “Sinatra Sings Sinatra — As I Remember It’’ during which he sang his father’s classics such as “Strangers in the Night,’’ “My Way’’ and “New York, New York.’’

“It was a great show. People loved it,’’ Wilkes said. “They really did. They got so much of an insight into personal stories around his dad and his life. It gave a huge insight into him that you couldn’t get from reading a book.’’

Bill and Bobbi Walker of Vero Beach were two of the Sunrise audience members who loved the show. Bill Walker had seen Sinatra Jr. once before but had seen his dad six times, once in Cherry Hill, N.J., and five times at the Golden Nugget in Las Vegas.

“Frank Jr.’s show reminded me of his dad’s,’’ Walker said. “He sang most of the great songs with a large top-notch orchestra in tuxedos like Frank.’’ 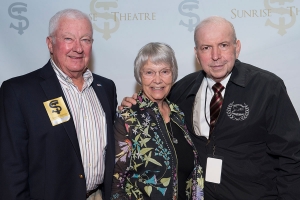 Bill and Bobbi Walker of Vero Beach pose with Frank Sinatra Jr. during a backstage meet-and-greet at the Sunrise Theatre on March 10.

As Sunrise Theatre members, the Walkers were selected to meet Sinatra Jr. back stage after the March 10 show. “It was a huge thrill to simply meet him and chat with him for a brief time,’’ he said. “He was so proud of his dad and was such a sweet person and great entertainer.’’

After the Sunrise performance, Sinatra Jr. appeared at the Knight Concert Hall in Miami on March 11 and the King Center for the Performing Arts in Melbourne on March 13. He was scheduled to perform Wednesday night at the Daytona Beach Ocean Center before his death earlier in the day.

The younger Sinatra followed his father’s singing career path. In 1963, at the age of 19, he gained worldwide headlines when he was kidnapped from a Lake Tahoe hotel room. He was released after three days when his father paid a $240,000 ransom.

Growing up, Sinatra Jr. said he saw his father more on screen than in real life. But the two grew closer in the last years of his father’s life. Sinatra Jr. was conductor and musical director for his father’s band. The elder Sinatra died in 1998 of a heart attack at the age of 82.

Sinatra Jr. had released a half dozen albums and also appeared in movies and television, including a role playing himself in “The Sopranos’’ and recording voice-overs for the “Family Guy’’ television series. He is survived by his sisters, Nancy and Tina, and a son, Michael Sinatra.

This story is distributed by Treasure Coast Business, tcbusiness.com, a service for the readers and advertisers of Indian River Magazine.