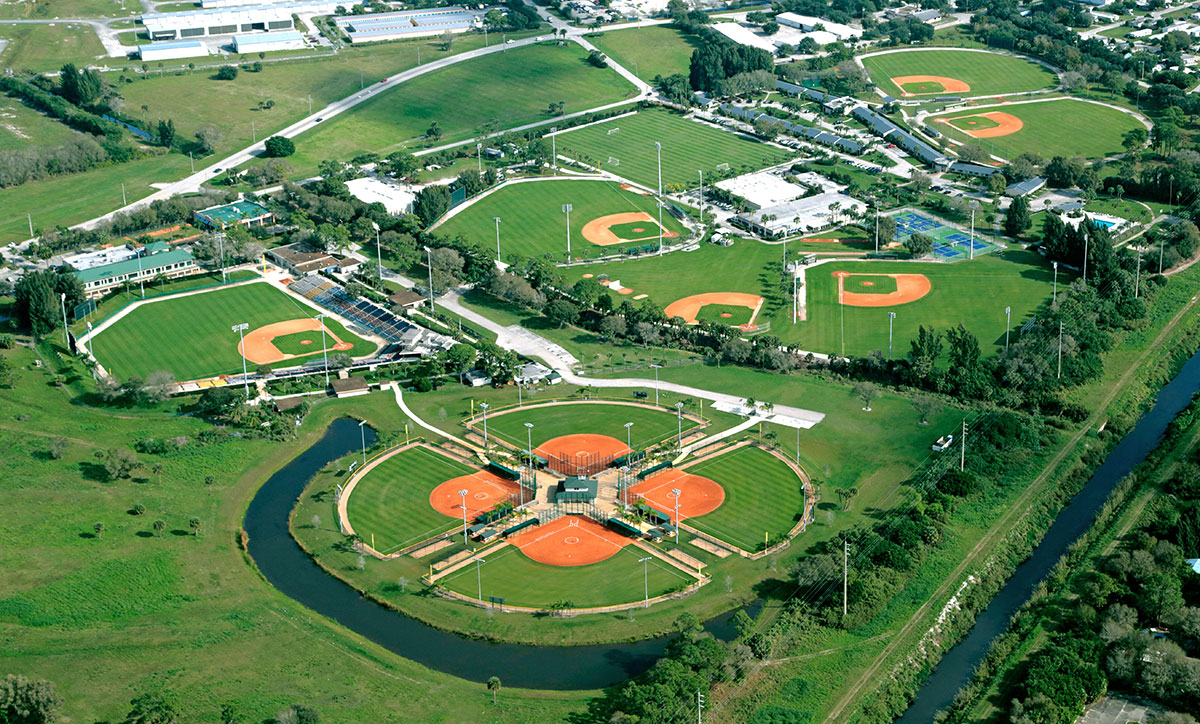 The Historic Dodgertown sports facility in Vero Beach, shown in this aerial view, has been renamed the Jackie Robinson Training Complex. ADAM KING 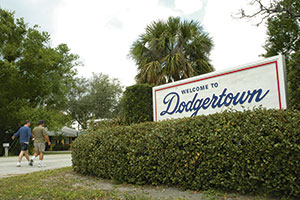 From 1948 to 2008 thousands of fans were welcomed to Dodgertown. The name was later changed to Historic Dodgertown. MARK DOLAN

Major League Baseball took over management of Historic Dodgertown in Vero Beach, announcing in April it is renaming the facility the Jackie Robinson Training Complex after the Hall of Famer who broke the color barrier when he signed with the Brooklyn Dodgers in 1947. MLB began managing the property following a leasing agreement.

The move will be an additional boost to the Vero Beach economy.

Historic Dodgertown was known as Dodgertown, the spring training base of the Brooklyn then Los Angeles Dodgers for 61 years. Since the Dodgers left in 2008, it has been run as a multi-sports facility where youth and professional teams can train.

In 2017, Peter O’Malley, chairman of Historic Dodgertown, and Indian River County officials began talking to Major League Baseball. O’Malley is also former owner and president of the Los Angeles Dodgers. In December 2018 the three parties reached an agreement. Per a county memorandum summarizing the Historic Dodgertown Facility Lease Agreement, MLB will lease the complex by purchasing from the O’Malley group its interest in Verotown, LLC, the lease entity. 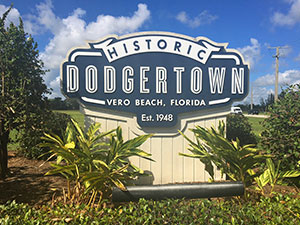 The transfer of the lease from O’Malley to MLB took place on Jan. 2, 2019.The new lease will be for 10 years and eight months with three five-year renewable options.

Indian River County will repair or replace all building roofs, the concession stands and the press box. These are defined as county improvements. The county states that these repairs or replacements “would be necessary” for anyone continuing to operate the facility.

Also, within the first three years, Verotown (MLB) will spend $10 million for Verotown improvements to the complex. This includes a new indoor training facility, replacement of all seating in Holman Stadium, a new scoreboard, an NCAA standard turf baseball field, hotel room upgrades, plus other improvements. Verotown (MLB) will be reimbursed by the county for 50 percent of these costs through contributions to a capital reserve account at the rate of $800,000 per year for the first five years and $400,000 per year for the final five years.

The $4.9 million county maintenance improvements and the county’s share of the Verotown (MLB) capital improvements will come from already budgeted items, a capital fund, tourist taxes and future sales taxes.

The agreement was worked out by O’Malley, Indian River County Administrator Jason Brown and MLB’s Tony Reagins, executive vice president of baseball and softball development. Reagins oversees the growth of youth and amateur levels of the sport for MLB.

MLB under Reagins has already conducted programs at Historic Dodgertown, including the Elite Development Invitational that brings 200 high school ball players from all over the country to “engage and mentor” them in the sport. A similar program has been conducted for girls playing softball.

The City of Vero Beach will sell the former nine-hole golf course property to the county for $2.4 million. The city had originally bought the property from the team in 2001 as part of the effort to keep the Dodgers in Vero. 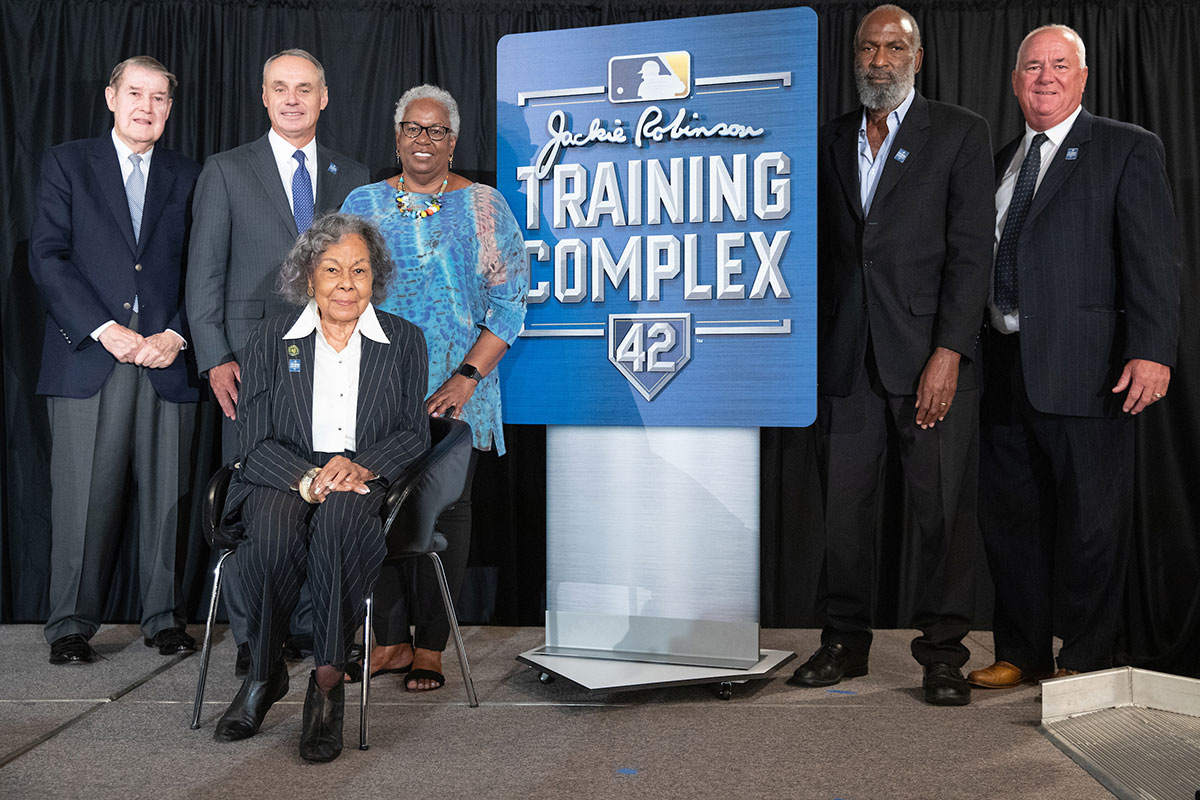 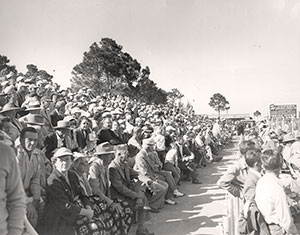 On opening day in Vero in 1948, Jackie Robinson, the first African American to play in the major leagues, homered for the home crowd. IRC HISTORICAL SOCIETY

BEGINNINGS
In 1948, Brooklyn Dodger President Branch Rickey, who brought Jackie Robinson into the major leagues, found Vero and its deserted World War II naval-air station, a place where his black and white players could live and train together in the spring in a non-segregated facility.

Following Rickey, Walter O’Malley developed Dodgertown into the most iconic spring training base in baseball. He added the 6,000-seat Holman Stadium in 1953 and, over the years, a nine-hole golf course, the villas that replaced the old barracks, the Dodger Pines golf course community with its own clubhouse and a conference center to give Dodgertown a year-round income. In 1964, the Dodgers bought the property from the City of Vero Beach rather than continuing to lease it.

Under Walter O’Malley and his son, Peter, the Dodgers won six World Series championships and 14 National League championships. While continuously investing in Dodgertown, they donated to the community and paid local taxes.

In 1998, Peter O’Malley sold the Dodgers for $350 million to Fox Television, which six years later sold it to the McCourts of Boston for $420 million. Neither of these owners had the ties to the local community that the O’Malleys did and constantly threatened to take the team to Arizona. The McCourts moved the team in 2008. 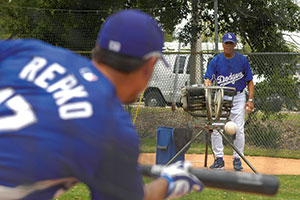 DODGER VACANCY
In an effort to keep the Dodgers in Vero, the city and county spent $17 million to buy the property, lease it back to the Dodgers, upgrade the complex and add a two-story administration and clubhouse building. The county issued a $29 million bond issue financed by a state grant and tourist taxes. The contract with the McCourts required them to pay a penalty if they broke the lease, which they did. However, if they had paid the penalty, they had the option to purchase the property, which the county did not want.

An attempt to bring the Baltimore Orioles to Dodgertown lost to a significantly higher offer from the City of Sarasota. That city spent $31 million in tourist development tax funds to renovate
its stadium.

With the sports facility experiencing financial difficulties, O’Malley stepped in, forming a partnership in 2012 with his sister, Terri O’Malley Seidler, and former Dodger pitchers Chan Ho Park and Hideo Nomo. The group signed a new lease with the county, extending operations to 2019. By 2016 the sports facility had shown its first profit.

The loss of the Dodgertown name was a disappointment for the Vero community. The McCourts refused to allow the name to be used.

O’Malley, working with a new Dodger ownership and with Major League Baseball, reached an agreement he described as “complicated” that led to the Historic Dodgertown name in 2013.

GOOD NEWS
Recently, Historic Dodgertown was added to the U.S. Civil Rights Trail, a collection of Southern landmarks where segregation was challenged in the 1950s and 1960s. Robinson and his fellow African-American Major League players began training here 70 years ago. Peter O’Malley, as director of Dodgertown, integrated the seating, water coolers and bathrooms in Holman Stadium in 1962.

With the MLB agreement, O’Malley says, “This long-term partnership is good news for the county and Vero Beach. Historic Dodgertown will become an internationally known tourist designation.”

Because it is year around, Historic Dodgertown “absolutely” has had a larger impact on the local economy than the former Dodger spring training. “With the Major League brand,” says McNeil, “Historic Dodgertown will have an even greater impact.”