Derek B. Hankerson announces marketing campaign for his and the late Judith Y. Shearer’s book 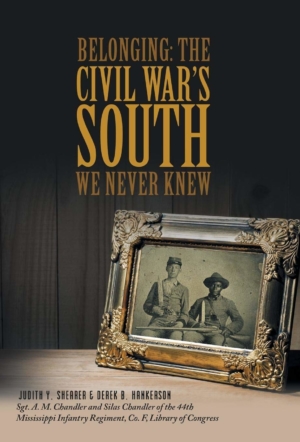 BENTON, Ky. – “Belonging: The Civil War’s South We Never Knew” (published by Archway Publishing) is Derek B. Hankerson and Judith Y. Shearer’s book that captures the life of G.A. Henry and provides a clearer picture of what the Confederate South was like for blacks before and during the nation’s split. “Belonging” is available for purchase on Amazon at https://www.amazon.com/Belonging-Civil-Wars-South-Never/dp/1480820016.

Hankerson, who is a descendant of Gullah Geechee West African slaves, and Shearer, whose family owned slaves, wrote the story of “Belonging” from a seldom told perspective. The story examines why Henry would fight for the Confederacy years after he was found defending a slave in court accused of killing a white woman. Shearer utilized family letters of Henry to research facts pertaining to his life after she discovered more information following the publication of the first book, “All Bones be White.” The authors also examined why some blacks chose to fight for the South in the Civil War.

Hankerson is embarking on a marketing campaign to expand the reach of his and Shearer’s book. He has also produced a film, “Gullah Geechee Corridor and the East Coast Greenway,” based off of their book.

About the Author
Derek Boyd Hankerson held three “Presidential Appointments” in Washington, D.C., dating back to his early 20s. Hankerson’s family has been in America since 1619. He is a direct Gullah Geechee descendent; after discovering he had 12 family members who fought for the Confederacy and finding it interesting, enlightening, and inspiring he wanted to tell the story. Hankerson also wrote, produced, directed, and narrated the Hankerson Henry Productions’ film, “Gullah Geechee Corridor and the East Coast Greenways” which is now available on video on demand. He earned his master’s in management and leadership from Webster University, studied communications at Bowie State and graduated with a bachelor’s in political science from the University of Maryland. He is a faculty member at the University of North Florida where he lectures in history, leadership, communications and politics. Following Shearer’s death, Hankerson acquired a new film partner, Sheri Piper-Henry whose children are descendants of the Patrick Henry clan out of Scotland. Piper-Henry is a program director and faculty member at Lake Superior College in Duluth Minnesota.

Judith Shearer earned a Master of Fine Arts in writing from Spalding University. She taught part time as adjunct faculty in the English and Philosophy Department at Murray State University and worked full time in the Department of Art & Design. She published essays and short stories. “Belonging” is her second book. Prior to Shearer’s death years ago, Hankerson promised he’d find a way to produce a film of the book.