VERO BEACH — In what represents the first commercial jet flight from any Treasure Coast destination, Elite Airways announced today that it is starting service from Vero Beach to Newark, N.J. 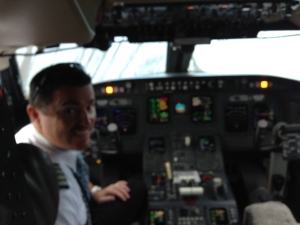 Chief Pilot Shawn Actis has been with Elite since its founding in 2006.

John Pearsall, president of Melbourne-based Elite Airways, said the service could be expanded as demand increases. “Vero Beach marks the beginning of our plans for new winter leisure travel routes between Florida and the Northeast,” Pearsall said during a press conference on the tarmac of the Vero Beach Regional Airport.

One-way fares begin at $149 and includes one free carry-on, free beverage service and a snack. The company does not charge fees if flights are changed. “We’re trying to do service in the style of a traditional airline,” Pearsall said. 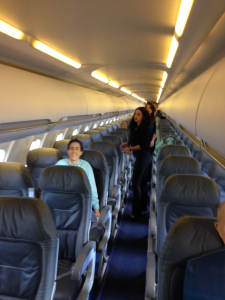 The interior of the 70-seat CRJ700, one of the jets that will fly between Vero Beach and Newark.

“It is estimated that the community of Vero Beach will receive a positive economic benefit of $1.8 million in the first year of operation,” said Eric Menger, airport director. “This will be a huge help to all our businesses.”

To reach the company or purchase tickets visit www.eiliteairways.com or call 877.393.2510.