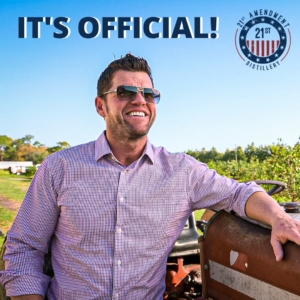 The Vero Beach City Council has approved plans for a new craft distillery to open in historic downtown Vero Beach. 21st Amendment Distillery was granted acceptance during the council’s Tuesday meeting to open its distillery and tasting room at 2055 13th Avenue directly across from the downtown Vero Beach post office. 21st Amendment Distillery, which was created to celebrate quality hand-crafted spirits and American perseverance, will begin off-site tastings in late 2021 and will open an on-site distilling operation and tasting room in 2022.

“We are thrilled to be coming to the downtown area,” said Palleschi. “We explored spaces all around Indian River County, but ultimately, the vibrant downtown area was where we wanted to be.”

Site plans include a tasting room, private tasting area as well as distillery tours outlining the full distillation process. There will also be a floating warehouse (Rickhouse) where whiskey will be aged directly on the Indian River Lagoon. This process enables constant motion throughout the aging process which enhances the taste profile of the contents inside the barrel. It will be impossible to replicate this whiskey.

“Vero Beach is a small community and I feel it is important to keep everything local. Aging our whiskey on the Indian River and creating a citrus-themed cello series using local citrus groves makes our spirits special – something that can be enjoyed by the hard-working people of our beautiful community,” said Palleschi.

Palleschi, a United States Marine Corps Veteran, was inspired by his father to create a business that honors hard-working Americans. The name of the distillery reflects a time in history when the people of the United States stood up to lawmakers resulting in an end to prohibition. Palleschi aims to continue this tradition by creating a space where people can gather after a long day of work to unwind and enjoy a drink and conversation.