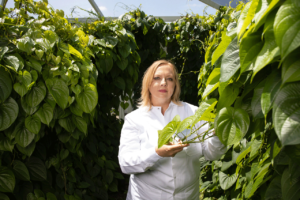 A scientist that combats invasive plants will be honored by the International Organization for Biological Control Nearctic Regional Section.

The IOBC-NRS will recognize Carey Minteer as the 2021 Early Career Outstanding Scientist at the annual meeting of the Entomological Society of America annual meeting in November in Denver, Colorado.

For five years, Minteer has led research at the Norman C. Hayslip Biological Control Research and Containment Laboratory as an assistant professor of entomology for the University of Florida’s Institute of Food and Agricultural Sciences (UF/IFAS) Indian River Research and Education Center (IRREC) in Fort Pierce, Florida.

One of the plants Minteer targets is Florida’s most serious weed, the Brazilian peppertree, a broadleaf tree that consumes more than 700,000 acres of Florida. Minteer and a team of UF/IFAS scientists and Extension agents released Brazilian pepper thrips in late 2019, and they continue to monitor its effectiveness. Minteer also has a permit to release a second agent against Brazilian peppertrees, but she needs to travel to Brazil to collect material to establish a colony in the Hayslip Laboratory.

Minteer and UF/IFAS St. Lucie County Natural Resources Extension agent Ken Gioeli – working with scientists from the U.S. Department of Agriculture and the Florida Department of Agriculture and Consumer Services Division of Plant Industry -- gave beetles to citizen scientists, ranch owners and homeowners statewide. In turn, they applied the beetle to air potato vines on their properties. After five years, the UF/IFAS researchers concluded the program in 2019 to work on other priority invasive plant problems such as Brazilian peppertrees. Now that air potato leaf beetles are established in Florida, the insect impacts air potato throughout the state, said Gioeli.

Minteer traveled with scientists from the USDA Agricultural Research Service and Australia’s Commonwealth Scientific and Industrial Research Organization to a remote tribal land in Australia to look for biocontrol agents of earleaf acacia, an invasive tree in central and south Florida. The tree is native to Australia but grows at a much slower pace in its native habitat.

The UF/IFAS Assessment of Non-Native Plants database classifies earleaf acacia as a plant to use with “caution” in central Florida and as an “invasive” plant in south Florida. Scientists at the Hayslip Laboratory are studying a colorful beetle called Calomela intemerata – an earleaf acacia biocontrol agent.

Since Minteer’s appointment at UF/IFAS, she has worked with six biocontrol agents of invasive plants and conducted native range exploration on two continents. Researchers at the Hayslip Laboratory have studied four of the species Minteer collected overseas. When COVID-19 restrictions lift, Minteer will return to Brazil to search for more BP biocontrol candidates.

The IOBC was founded in 1956 “to promote environmentally safe methods of pest and disease control in plant protection,” according to the organization’s website. The Nearctic region comprises the zoogeographic region of North America, together with Greenland, and as far south as northern Mexico.