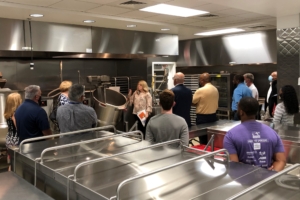 The group got an up-close look at how the state-of-the-art operation converts fresh produce into thousands of meals, a collaboration that supports area farmers and growers while providing nutritious food to people who otherwise wouldn’t have access to it.

The Food Production Kitchen benefits area growers by providing them an additional outlet to sell produce and ensures that nutritious produce is available to the one-in-four individuals on the Treasure Coast who don’t always have access to nutritious food. It also serves as a training outlet for students in Treasure Coast Food Bank’s Culinary Training Program.

“Everything was designed to be multi-functional. We can reconfigure this equipment for meal prep for cold meals for students and seniors,” Cruz said, explaining how Treasure Coast Food Bank prepares meals for St. Lucie County’s schools and for the Summer Meals programs.

The Food Production Kitchen played a major role in feeding people throughout the state much of last year during the COVID-19 shutdown. Using its two large-capacity cooking kettles, Treasure Coast Food Bank took in thousands of pounds of produce and converted them to vegetable soup that was distributed to people in need throughout Florida. At full operation, the Food Production Kitchen can process more than 25 million pounds of fresh produce each year.

“Rather than let that produce go to waste, we made thousands of gallons of vegetable soup,” Cruz said. “What we do every day is package food,” she added. “We package it in cases, in Cryovacs, and in gallon bags, and it goes out in a variety of ways to those in need. Hunger never sleeps, and neither do we.”