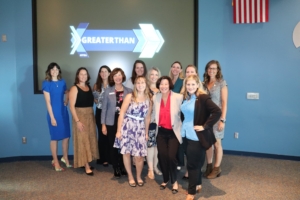 Sue-Ellen Sanders, WPSL Radio Talk Show Host and community editor/activist and writer, was installed as President of the Treasure Coast Chapter of the Florida Public Relations Association (FPRA)  last month. At the meeting Sue-Ellen was also honored as FPRA Member of the Year, an award presented to a member who has consistently gone above and beyond in service to the organization.

Founded in 1938, FPRA is the oldest public relations organization in the United States, with more than 1,200 public relations professionals state-wide as members and 50 local members. The award was presented by outgoing chapter president Sarah Prohaska, at the Treasure Coast membership meeting and installation of officers held at IRSC Knight Center on September 23, 2021. Also recognized was Stephanie Nelson, as winner of the President’s Award and Kyrianna Hoffses as winner of the Rising Star award.