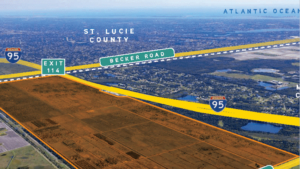 “The site is extremely well-located, with excellent exposure along I-95 in Martin County.” Krasnow said. “This area has seen explosive growth recently, which makes this purchase an ideal long-term value play for the booming industrial sector on the Treasure Coast.”

The long-held site has undergone years of planning and positioning for approvals with Martin County, which allows for over 5,000,000 SF of Industrial, 1,000,000 SF of office, 250,000 SF of retail and over 500 hotel rooms. The project is expected to be completed in phases and ready for development within the next 12-24 months.

“This purchase recognizes the current trend to develop large industrial tracks within the South Florida market,” Falk said. “Its proximity to major interstates provides accessibility to an abundant labor force and affordable housing in this market.”

The Treasure Coast’s newest employment centers range from Cleveland Clinic, Cheney Brothers, FedEx and numerous Amazon distribution centers. Substantial population growth along the Treasure Coast has been a critical factor in attracting companies to expand into the area. Data released by the U.S. Census Bureau shows that the population among the three Treasure Coast counties (Martin, St. Lucie, and Indian River) increased by 17 percent since 2010. In just Martin and St Lucie counties, the total population for 2021 is 489,538, with a 24.1% projected population by 2026. Household income averages at $81,720, median at $59,735 and per capita at $32,866. According to the Neustar’s demographic forecast for the next five years, household growth is estimated at 18% and population growth at 19%, computing to almost 25,000 new households with an increase in population of 68,000. In Martin County, the unemployment rate is currently at 4% and the county employs more than 74,002 team members as of August 2021 – as listed on the county website.