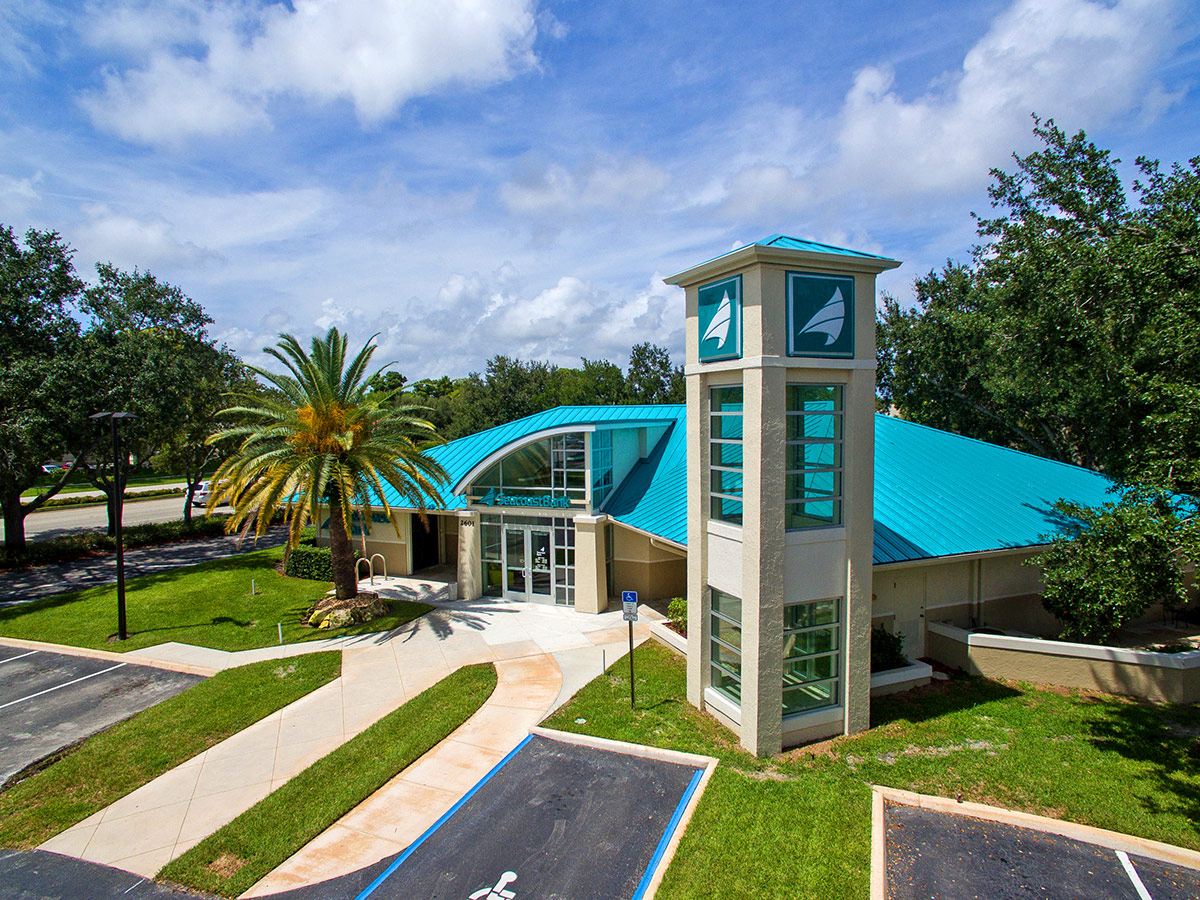 Three banks with strong presence on the Treasure Coast are expanding or merging, according to deals that were announced in the months before COVID-19 upset global financial markets.

Customers won’t see many changes right away, but each of the financial institutions says customer service will be enhanced by improved digital banking platforms, in time for the new remoteness of American life.

Stuart-based Seacoast National Bank and its parent, Seacoast Banking Corp., announced in November and then again in January that they were adding smaller community banks, making it one of the largest community banks in the state, with a footprint that extends south to Fort Lauderdale, north to Daytona Beach, much of central Florida and west to the Tampa Bay area.

Seacoast has 50 branches in Florida and is one of two banks based on the Treasure Coast, the other being the four-branch Marine Bank & Trust based in Vero Beach. Seacoast Bank’s history goes back to the 1926 establishment in Stuart of First Citizens Bank.

In an area that includes Martin, St. Lucie, Indian River and Okeechobee counties, Seacoast, according to a mid-2019 count by the Federal Deposit Insurance Corp., had 17 branches with $2.31 billion in deposits, or 16 percent of the area’s total deposits, second to nationwide Bank of America. Seacoast was No. 1 in Martin County in deposits, at $1.38 billion, for 26.4 percent share of total county deposits. It was fourth in St. Lucie County; sixth in Indian River; and first in Okeechobee. 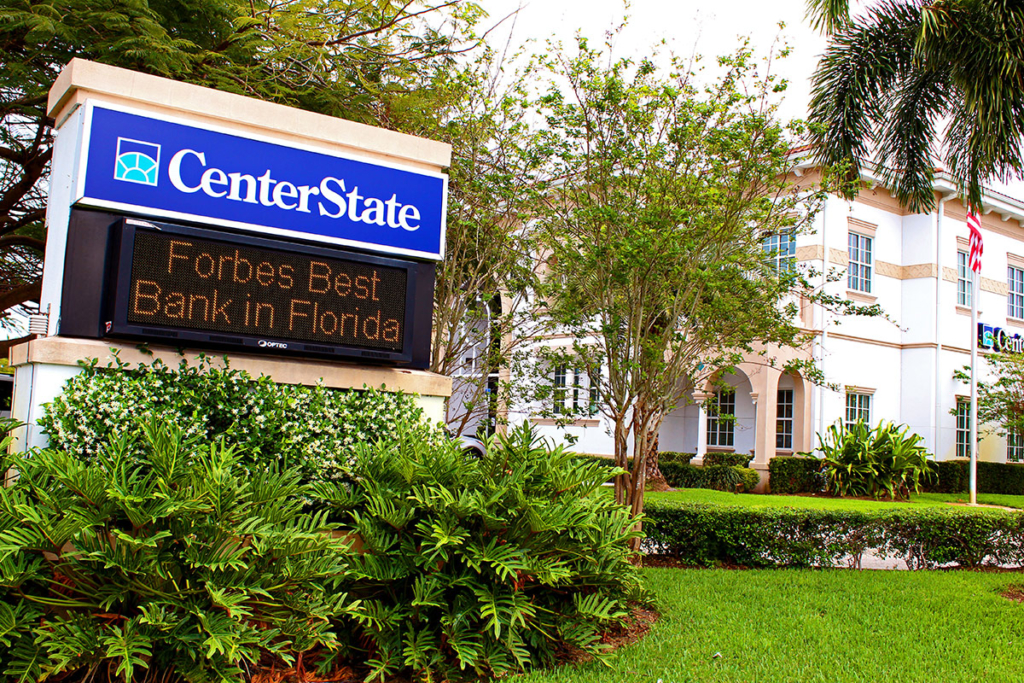 CenterState Bank has 11 locations in the area, including this branch in Vero Beach. CenterState plans to merge with South State Bank in a deal scheduled to close in the third quarter. The new company will be called South State and headquartered in Winter Haven. GREGORY ENNS

CenterState has 11 locations in the four-county area and in mid-2019 had a 7.3 percent share of the area’s deposits, sixth among financial institutions, according to the FDIC. 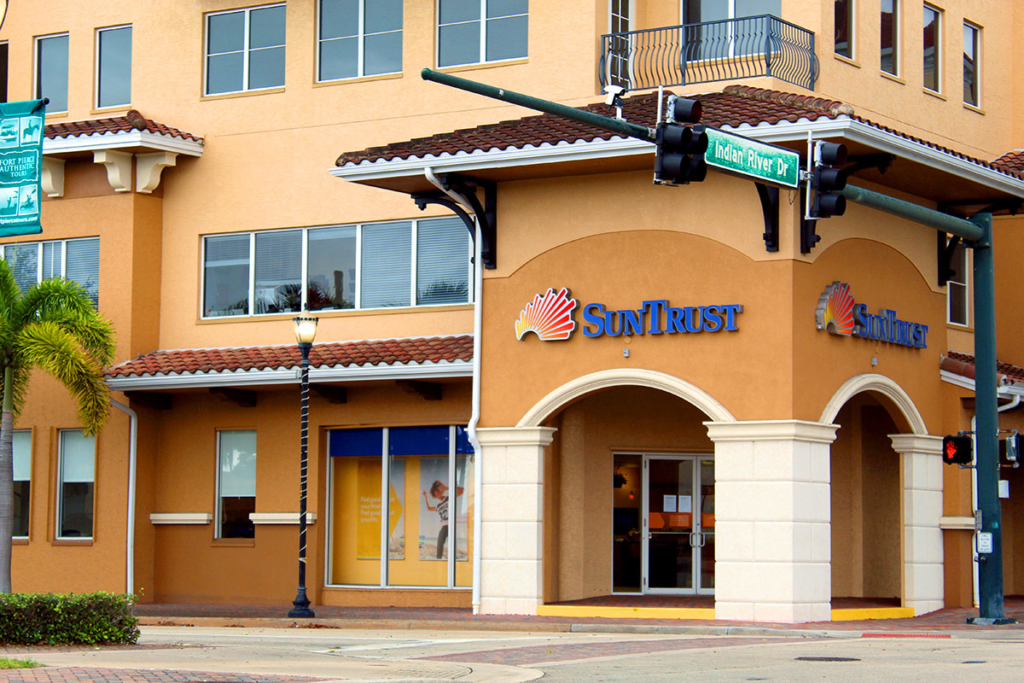 This SunTrust Bank is one of 21 Treasure Coast area SunTrust and BB&T branches that will eventually sport the new Truist colors of purple and white. There is also one SunTrust branch in Okeechobee that will become Truist. SunTrust and its predecessors have had a presence in downtown Fort Pierce since the 1920s. Its most recent location is in downtown’s Renaissance Building. GREGORY ENNS

The Treasure Coast also has a piece of the largest bank merger since the 2008-2009 financial crisis, between SunTrust and North Carolina-based BB&T, valued at $66 billion when the deal closed in early December. The new company is called Truist Financial Corp., based in Charlotte.

According to FDIC records, SunTrust, once known as Sun Bank, is the third-largest financial institution in Florida, behind Bank of America and Wells Fargo. BB&T is Florida’s seventh-largest.

Truist unveiled a new purple-dominated logo in January, but for now SunTrust and BB&T branches on the Treasure Coast will remain as they are. The full transition could take up to two years, according to Truist officials.

SunTrust and BB&T have nine locations in St. Lucie County, eight in Martin, four in Indian River and one in Okeechobee. Truist is now the sixth-largest bank by deposit count in the United States and has locations in 17 states from Pennsylvania to Texas with its strongest concentration in the Southeast.

Among banks in Florida, CenterState is 16th by total deposits count, and Seacoast is 20th. Vero Beach-based Marine Bank & Trust is 114th among the 205 FDIC-listed institutions in Florida.

Each of the expanding or merging banks says they will feature improved digital banking as a result of the increasing size, which is seen as essential to future success. Banks have in recent years eased customers toward online transactions, and as COVID-19 alters most aspects of Treasure Coast lives, in-person consumer transactions by early spring were largely by appointment only.

On March 13, Seacoast announced the completion of its acquisition of First Bank of the Palm Beaches, which at end-2019 had deposits of $173 million and loans of $143 million. Seacoast paid the equivalent of $22 million for the two-branch Palm Beach County institution.

In late January, Seacoast signed an agreement to acquire Fourth Street Banking Co., the holding company for Freedom Bank of St. Petersburg, which had at year’s end $308 million in deposits and $265 million in loans. At the time of the announcement, the deal was worth nearly $64 billion. Seacoast shares went from $23.39 when the deal was announced to $17.81 by late March, down 24 percent. The deal is to close late in the second quarter of 2020.

The purchase of Freedom Bank will be the 13th Seacoast acquisition of another Florida community bank since 1995, and its ninth since 2014.

Chuck Shaffer, the chief financial officer and chief operating officer of Seacoast, did not say whether the devaluation of the U.S. and global equity markets will have an impact on the company’s growth plans.

“We don’t have any new deals we are ready to announce at this time, but yes, we continue to look for opportunities for acquisitions in high-growth markets in Florida like Palm Beach County, Tampa-St. Petersburg, Southwest Florida and Central Florida,” Shaffer told Treasure Coast Business.

“In light of COVID-19 and the resulting business environment, our main focus right now is on serving our customers,” Shaffer said. He stressed that Seacoast provides customers with “convenient online, mobile and telephone banking that they can do from home” and that Seacoast has instituted a customer assistance program for those “whose finances have been adversely affected by the pandemic,” online at SeacoastBank.com/recovery.

Seacoast Banking Corp. is traded on the Nasdaq under the ticker symbol SBCF.

The CenterState-South State merger is scheduled to close in the third quarter of 2020. A Financial Times columnist in December, on the heels of the creation of Truist, said 2020 would be a banner year for U.S. banking mergers. Now, because of COVID-19, banking analysts say it is not clear whether that forecast will ring true.

In a joint filing with the Securities and Exchange Commission in March, CenterState and South State mention that COVID-19 may adversely affect their plans to merge, and that it may muddy financial forecasts. SEC filings require publicly traded companies to give frank assessments of risk factors, which are not forecasts.

Meanwhile, since the two banks announced their merger intentions on Jan. 27, plans to integrate the two similar financial institutions are moving apace, said Richard Murray, who will be president of the new South State.

There is not much geographic overlap of the two banks, but their corporate cultures and core values are similar, and their executives have long known one another, Murray said.

Since the January announcement, executives of each bank have met weekly — lately by conference call due to COVID-19 — and have confirmed that they have similar financial goals and corporate cultures, Murray said.

A presentation by the two banks in January showed that CenterState had more in deposits, $13.1 billion to $12.2 billion.

The new bank will have more than 1 million customers. At the time of the merger announcement, the two companies had a market capitalization of $6.1 billion, which had fallen by late March to about $4.2 billion with the dip in stock markets.