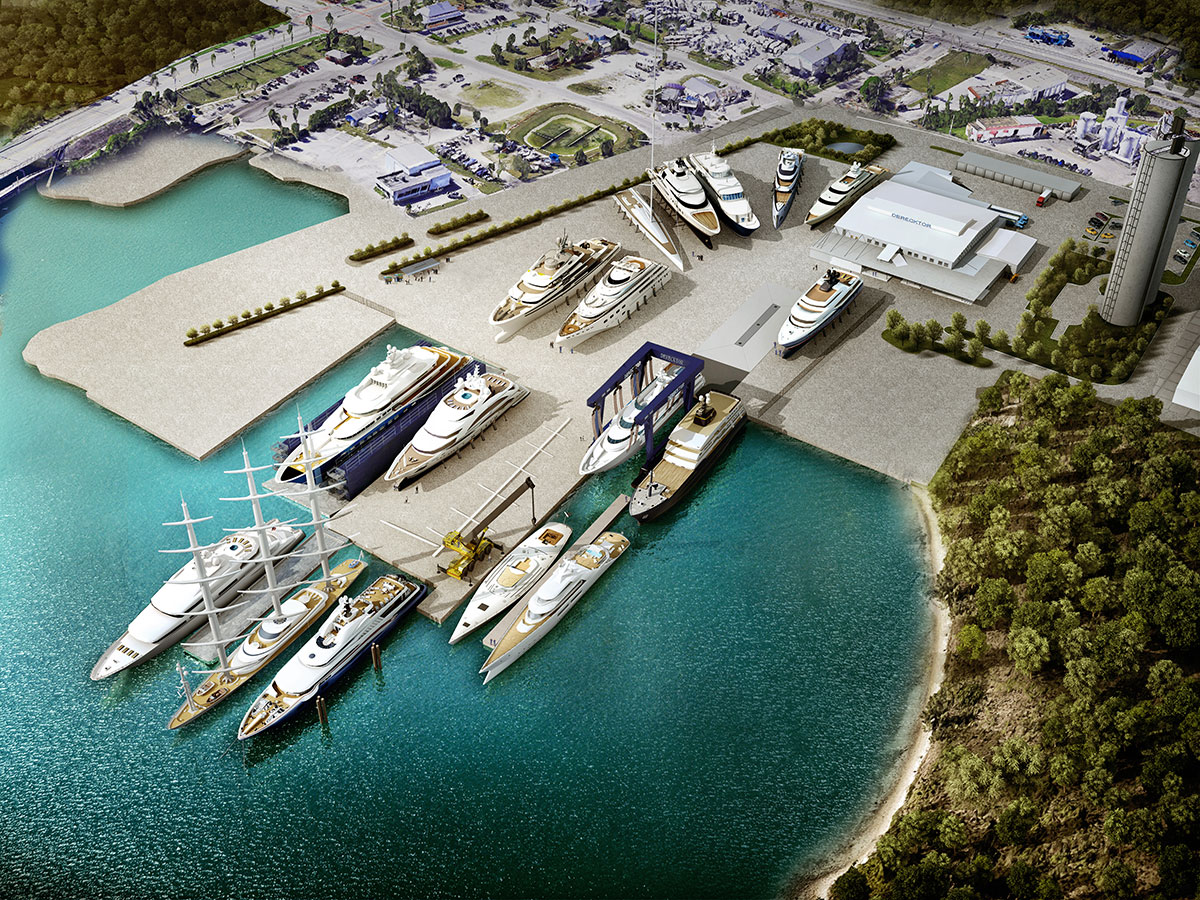 A rendering from Derecktor Shipyards shows what the new mega yacht maintenance, repair and overhaul facility at the Port of Fort Pierce is likely to look like. 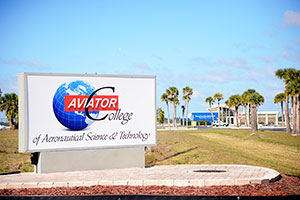 The Aviator College at Treasure Coast International Airport and Business Park currently has 500 students and is expanding to teach 800. It is adding a framework and powerplant technology program. ANTHONY INSWASTY

After years of dormancy, the Port of Fort Pierce leaped into its new life as a mega yacht maintenance, repair, overhaul facility and jobs creator on April 16. A standing ovation followed a lease agreement approval by the St. Lucie County Commission.

Now that decades of wishing, hoping and planning are in the rearview mirror, the port is ready to become the economic engine true believers always thought it could be and increase job opportunities, commissioners agreed.

With Derecktor Shipyards as the vehicle, the sailing and motor yachts of the ultra-rich from around the world are the engines expected to drive an explosion of new jobs and an economic output worth an estimated $105 million in the four years after operations start.

For years the port had been inert, said Port and Airport Director Stan Payne in a review leading up to the vote. But the county’s $25 million purchase in January 2018 of 12.5 acres of land at the port opened the way for a tidal wave of change.

The maintenance, repair and overhaul of the sleek yachts owned by millionaires and billionaires are expected to generate as many as 900 direct and indirect jobs as hiring at the shipyard, businesses serving the shipyard and retail businesses in the area ramps up. 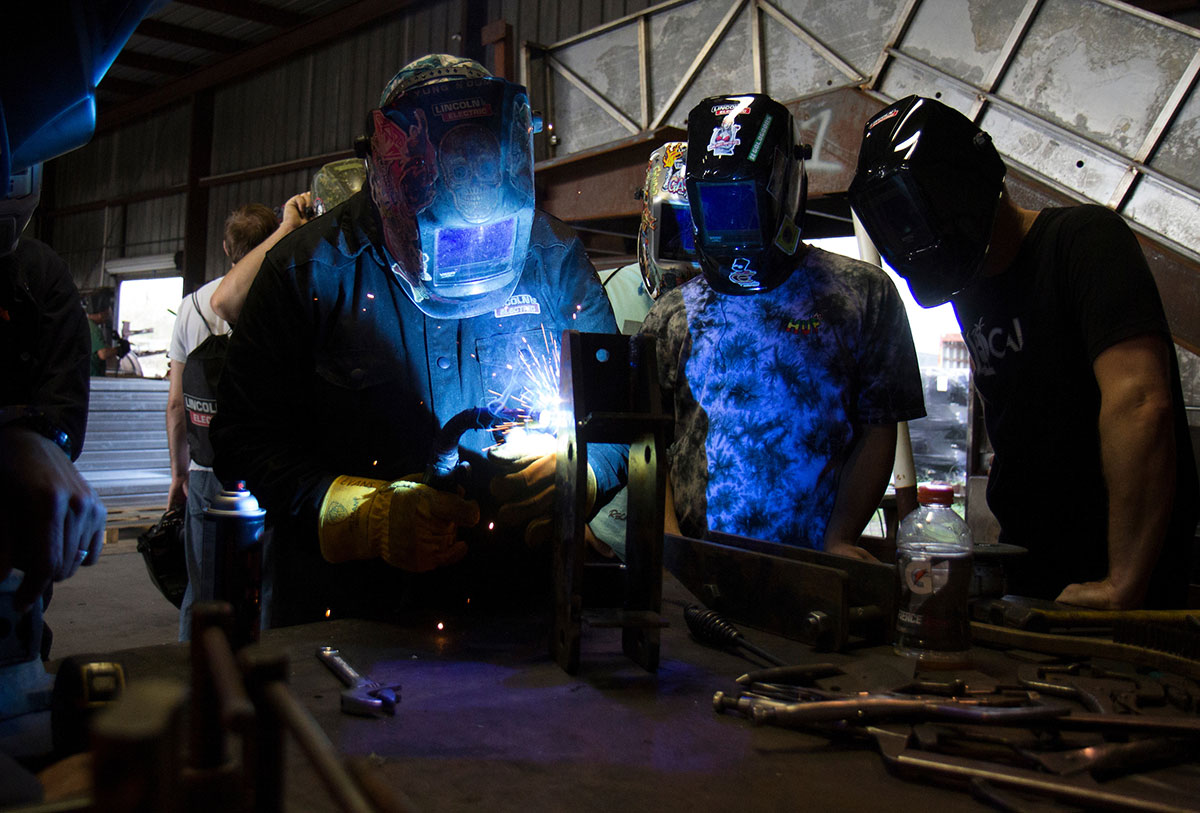 The new $7.9-million hangar building at the airport will accommodate planes the size of a narrow-body Boeing 737 or an Airbus A320 plus a corporate jet the size of an Embraer 175. Ground was broken for construction in May. ST. LUCIE COUNTY

Prosperity “will happen as a result of the jobs that are going to come from here,” Dzadovsky said. “The knowledge they will learn, the families they will create and the economic cycle that will continue in this region.”

Growth at the port, along with expansion at the Treasure Coast International Airport and Business Park, will create the need for workers in marine- and aviation-related skilled trades. Indian River State College plans to offer degree and certification programs in skilled trades for those who want to be certified in a variety of trades such as welding. To do this, the college received a $1.53 million grant to teach mechanical and technical skills.

Starting salaries for these skilled workers are expected to be $11,000 higher than the current average career salary, bringing an estimated $2.8 million direct increase and $14.8 million indirect increase to the economy from workers spending their money in the community.

Since the middle of April, Derecktor has been working on permitting and inspections, said John Koenig, the company’s communications director. But they aren’t wasting any time pushing forward.

The world’s largest mobile lift to raise ships weighing up to 1,500 tons out of the water is in the planning stages, as is a floating drydock with a capacity of 3,500 to 5,000 tons to accommodate yachts as long as 325 feet or more. A drydock allows boats to float into a rectangular space with a gate across the front. The water is pumped out of the space so workers can reach the hull area that is normally below the water.

While this is going on, the county will be demolishing the old packing house that sits at the front of the working port. Another building, just to its northwest, will remain and be renovated into offices and shops for metalworking, woodworking, electrical work and storage, Koenig said. “It needs a lot of work.”

Derecktor is moving quickly. Two local people have been hired to work on marketing and administration. Two more from its Dania Beach offices are working on permitting. The company intends to hire a local person who has taught welding and will be able to teach on the job. Eventually, the company will be offering apprenticeships to students in skilled trades programs at IRSC.

A 150-foot sailboat, just three years old, has already been in to have work done on its rigging by a contractor in a deal arranged through Derecktor. “It was really exciting to see this already happening,” Koenig said. 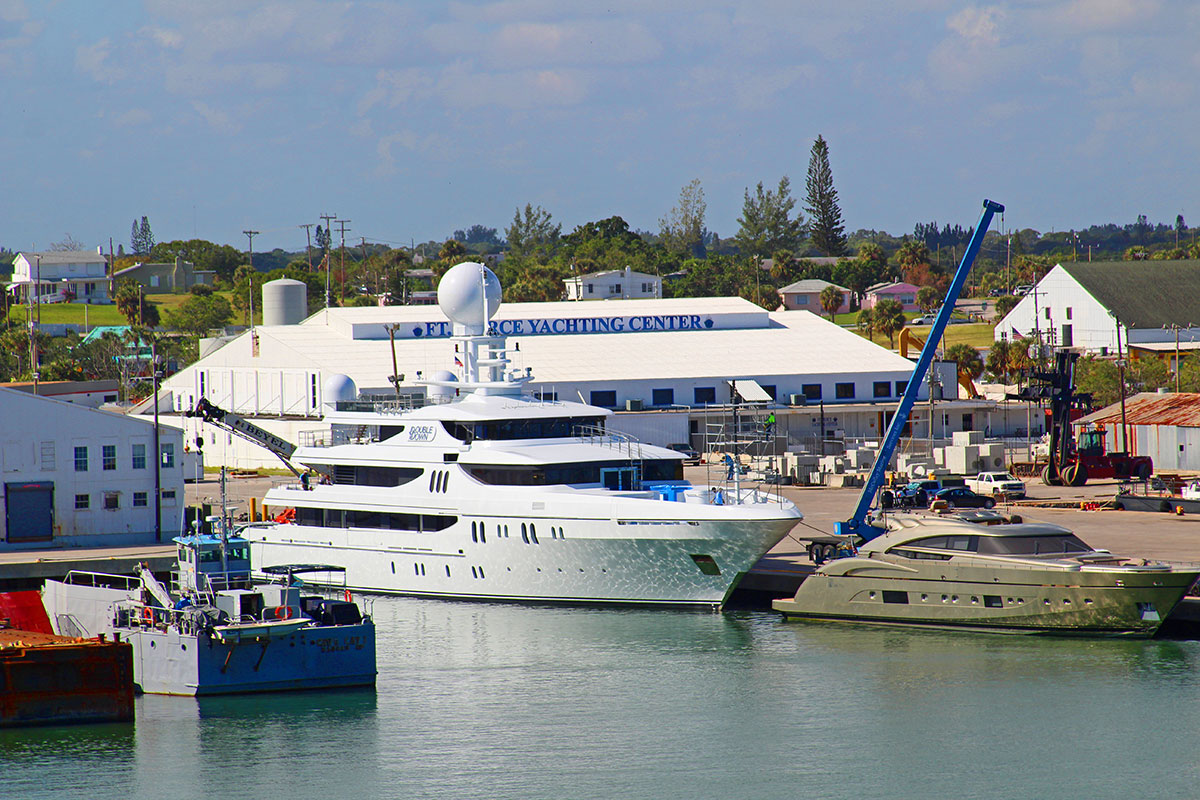 Expect to see mega yachts like this one undergoing maintenance, repair and overhaul by Fort Pierce Yacht & Ship at the Port of Fort Pierce as Derecktor Shipyard of Dania begins to operate there. Hundreds of jobs will be created both directly and indirectly. ST. LUCIE COUNTY

Fort Pierce can grow into a destination for ships from all over the world in need of maintenance, repair and overhaul, he said. “No other yard on the east coast of the U.S. has the unique attributes that Fort Pierce has. The largest sailing yachts have direct access with no overhead obstructions, the channel and turning basin have deep water. “

“We went into this with the idea of creating a high level of economic activity,” said County Administrator Howard Tipton. “We were trying to create opportunities for Fort Pierce to be on the worldwide map for job creation and maintenance, repair and overhaul of mega yachts.”

The agreement with Derecktor relieves the county of having to provide matching money for any grants obtained for the port work, as well as relieving the county of having to operate and maintain the port. The company has also agreed to move its headquarters from Dania Beach to Fort Pierce within three years. And, the company will be responsible for any environmental issues rising out of operations and carry a $10-million pollution liability policy.

The county is going to get millions of dollars of guaranteed revenue from the lease agreement as well as additional revenue conditioned upon Derecktor’s sales success.

Even before Derecktor was approved in April, Fort Pierce Yacht and Ship, the local company that was not chosen by the county to operate the port mega yacht facility, hit the ground running and is already working on mega yachts on its five-acre parcel at the port. One acre of that land fronts on the water. The managing partner in the company, Buddy Haack, tried to negotiate a sale of the working waterfront terminal with its former owners in 2016 while he was working on mega yachts at the port.

County Commission Chairwoman Linda Bartz asked Derecktor to work with Fort Pierce Yacht and Ship “to come to an agreement so that we can see success for both groups.”

The port isn’t the only county facility to reverse gears and head into the maintenance, repair, overhaul and jobs creation business. 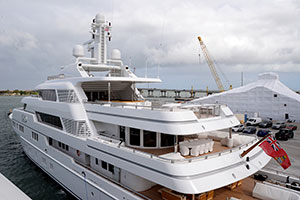 At the Fort Pierce Yacht & Ship dock at the port where maintenance, repair and overhaul of mega yachts is already underway, the St. Nicolas is in for some work. Behind it, My Vibrance is wrapped in a protective cover to keep paint and fumes from entering the water or air. ANTHONY INSWASTY

County officials broke ground for a new 45,000-square-foot hangar at the Treasure Coast International Airport in May. Ahrens Companies won the bid. Completion is expected in the spring of 2020, county spokesman Erick Gill said. The cost of the hangar is about $7.9 million which includes both design and construction. Funding for the project comes from the Florida Department of Transportation, Economic Development Administration and local county funding.

The county will request bids from companies interested in using the hangar for maintenance, repair and overhaul of planes such as the Airbus A320, Embraer 175 business jets or the narrow-body Boeing 737.

IRSC and the Aviator College at the airport’s business park will train workers in the skills they need to be hired for the airport jobs.

The city of Fort Pierce jumped into the mix late last year with a decision to investigate starting a seaplane base in the Indian River Lagoon just offshore from Veterans Memorial Park. The base, which would be convenient for seaplanes flying to and from the Bahamas, would bring more pilots and visitors into Fort Pierce’s restored historical downtown, encouraging the hiring of more people in its restaurants and retail shops.

A more intense focus on bringing jobs to the area is succeeding, said Jill Marasa, vice president of business retention at the St. Lucie County Economic Development Council. Over the last 18 months, 344 jobs were created inside the city boundaries and another 166 outside the city as companies expanded. Maverick Boat Group constructed a new building and added 100 jobs to its existing 271 jobs, for example.

“It’s really the time and the place for St. Lucie County to thrive and to be the economic engine for our region and our state,” said Dzadovsky.