What’s in Your Salad? 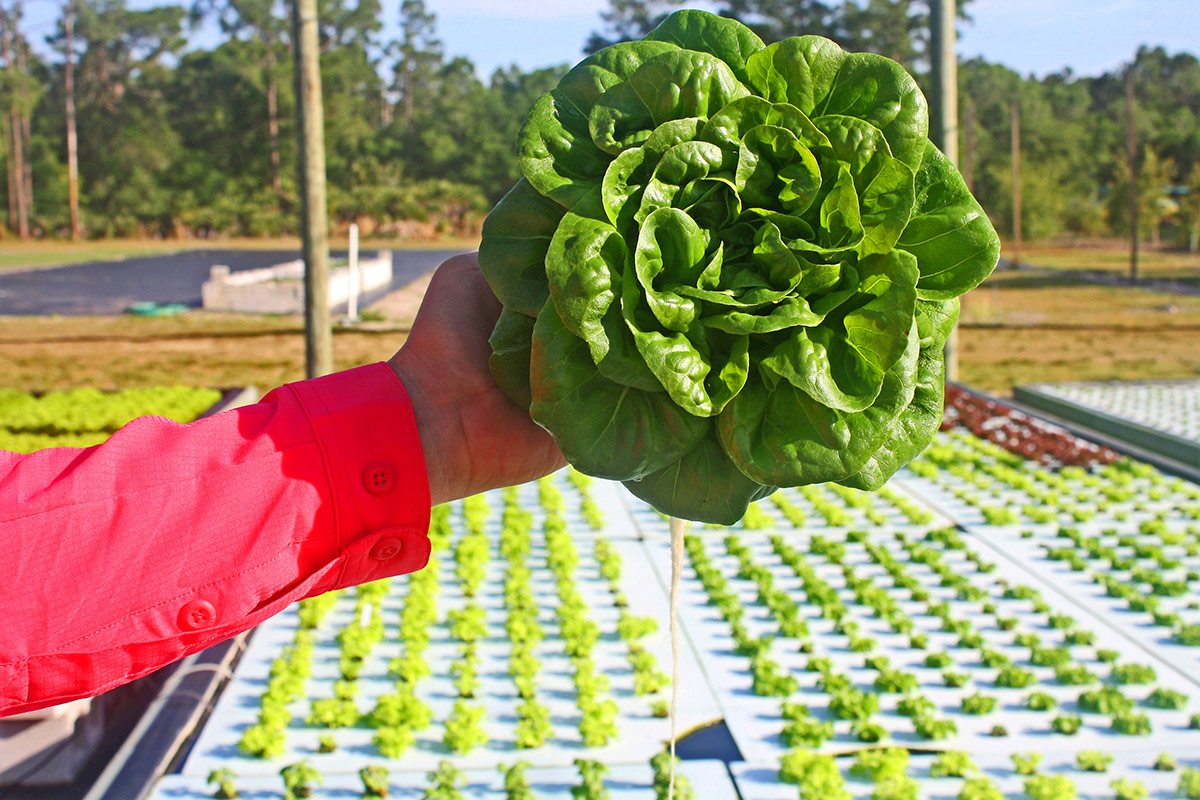 Florida’s economy may run on tourism, but agriculture is next in line. Fellsmere, in northern Indian River County, is home to citrus groves, farms and cattle ranches. It is also the home of Ecotone Farm owned and operated by Jerry and Tamara Renick.

In business since 2012, its name gives a clue to its philosophy — Ecotone’s mission is to produce a high quality, nutritious product that has little to no impact on the natural environment, is pesticide free and non-GMO (genetically modified organism).

Over the years, Ecotone has expanded to produce 20,000 units of hydroponic lettuce as well as several varieties of tomatoes, peppers, cucumbers and more. Ecotone supplies local restaurants, country clubs and grocers and features an on-site fresh market at 13945 89th St. Its Community Supported Agriculture program provides boxes with seasonal lettuce and other vegetables on a monthly basis for pickup or delivery. Gift baskets are also available. 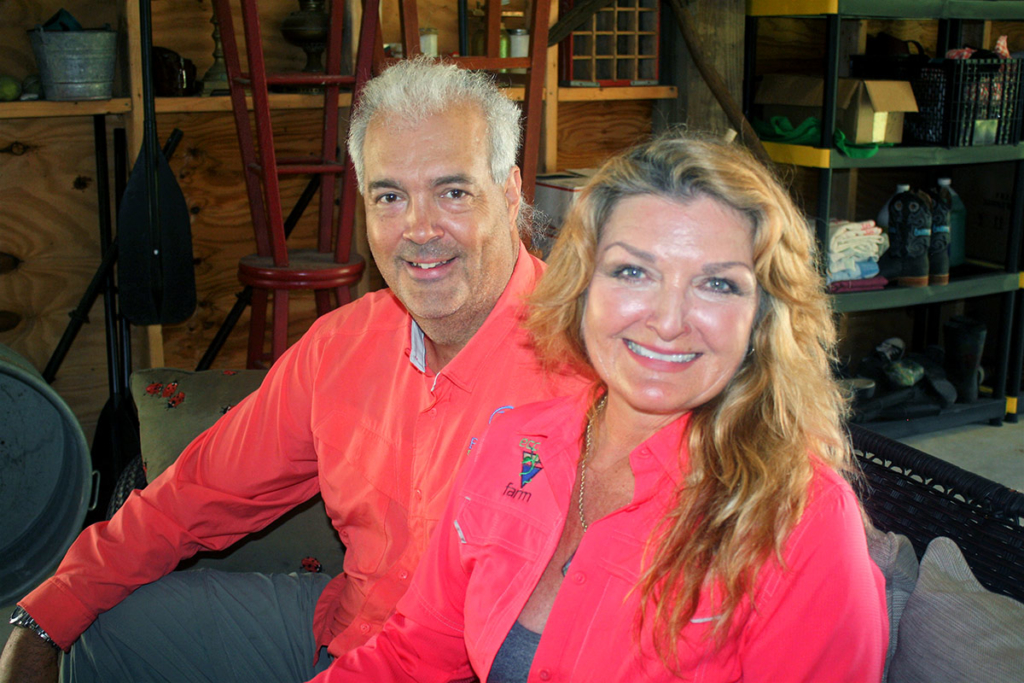 Ecotone owners Jerry and Tamara Renick talk every day about their vision for their farm and community. “We love what we do,” says Jerry.

The Renicks met through mutual friends in Vero Beach, and clicked right way, according to Tamara, who was a florist in Chicago. “ Produce and flowers are much the same in that you’re dealing with a perishable crop.”  Tamara’s business background meshed well with Jerry’s environmental vision.

Jerry and a partner had sold an aquaculture business in Indiantown; he purchased a 5-acre ranchette in Fellsmere as an investment and has since bought an adjoining plot, but his business was working with developers.

Then the recession hit. With reduced demand, Jerry wanted something more, something different. He and Tamara took baby steps that led to their first hydroponic lettuce crop. They took classes in aquaculture at Indian River State College’s Harbor Branch site. Jerry worked on his master’s degree with University of Florida; his final project was a plan for a hydroponics lettuce farm.

Finding buyers for their first crop was not difficult.

“I enjoy cold calling and the product sells itself visually,”  Tamara says. “We offer same-day harvest. There’s no comparison to the lettuce bought from out of state.”

By law, lettuce coming from another state is dipped in chlorine and may sit on a truck for weeks before it shows up in a restaurant or grocery store. Presented with Ecotone’s lettuce, clients were quickly persuaded.

It didn’t take long for Cheney Brothers, a national food distribution company, to notice. But the expansion was premature.

“They needed more product than we could deliver and wanted us to buy from other sellers and repackage,” Jerry says. Deliveries ate into valuable time away from the farm. “We decided to take a step back and focus on the local market and diversity.”

According to Tamara, “I’m the muscle and he’s the brains.” Jerry is an environmental scientist with a master’s degree in environmental horticulture and a certified arborist. Jerry grew up in Maryland, and his interest in marine biology eventually brought him south. Today, Jerry is a Fellsmere city councilman and sits on the Indian River County Agriculture Advisory Committee. 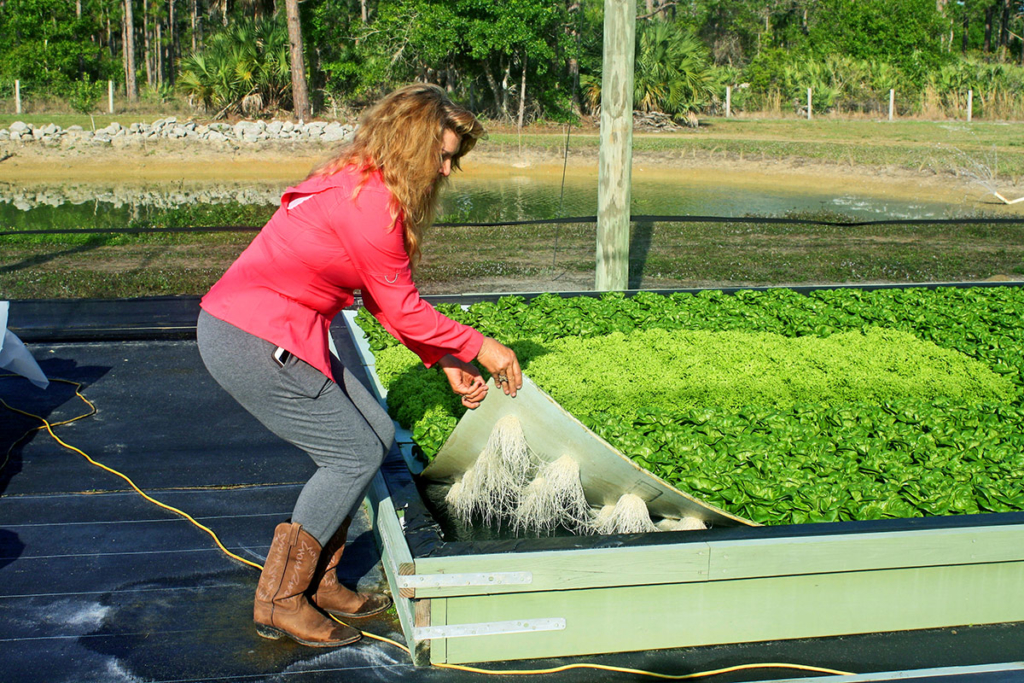 Ecotone uses the raft method for hydroponic farming. Seedlings are placed in the holes of the mats, through which roots extend into nutrient-enriched water.

NO NEED FOR SOIL

Farmers as early as 5000 B.C. learned how to rotate crops so that the soil was not depleted of important nutrients; it also helped with pest control. Hydroponics takes soil conservation a step further. Hydroponics [literally “water work” in Greek] eliminates the need for soil. Although Ecotone has added some ground crops, hydroponics is still its primary focus. 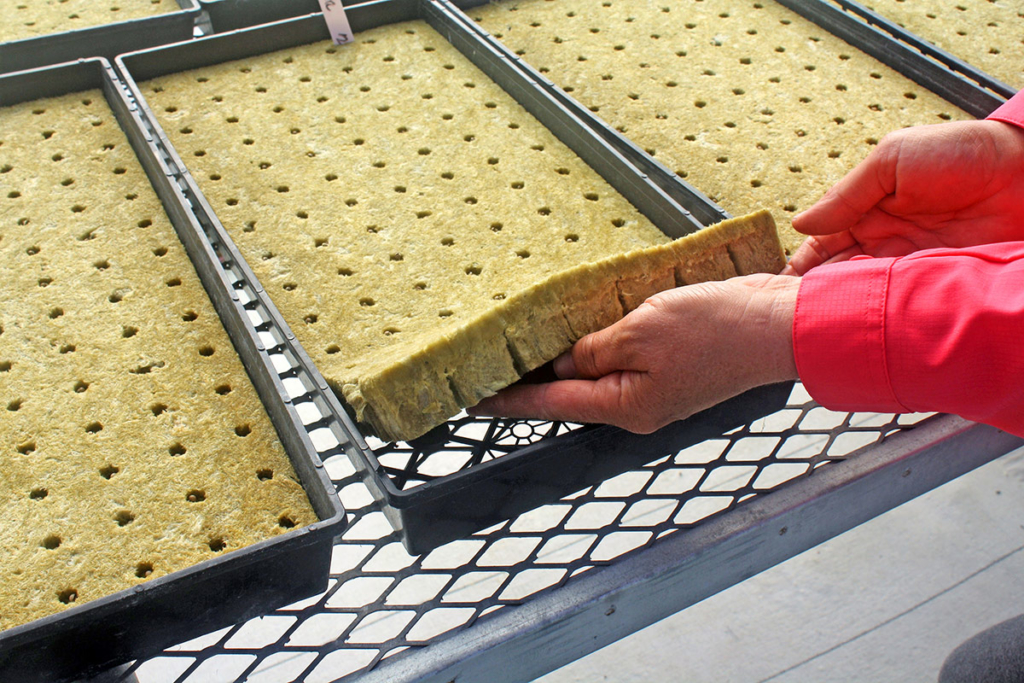 Although it is a little more expensive to use as a growing medium, volcanic wool is preferable for the varieties of lettuce Ecotone Farm produces.

How does it work? Seeds are germinated in volcanic wool, a growing medium made of basalt and chalk, melted and spun into fibers that are formed into mats and easily broken into smaller chunks. Although volcanic wool is not organic [it’s not derived from living matter], Jerry says that its reliability and uniformity are worth the extra cost. “Coconut coir [the middle coat of the fruit] and pine bark are sometimes used but they are not as good for lettuce,” he explains.

Hydroponics farmers may use bottles or buckets, but Ecotone uses the raft system. Foam mats fit into tanks of nutrient-rich water. Once germinated in the volcanic wool, seedlings are placed in the holes of the rafts, where their roots flourish in the water and produce strong, beautiful — and delicious — varieties of lettuce and other plants.

South Florida’s growing season is longer than that of northern regions but there is a downside to all the sunshine. During the hottest months, Ecotone’s tall climate-controlled greenhouse is particularly important. The most expensive part of the farm, Jerry says that it’s really more of a shade house, what growers call CEA — controlled environment agriculture.

By mid-May or early June, South Florida is too hot and humid for the best product. Inside Ecotone’s huge greenhouse, however, water and fans keep the air at the optimum temperature. Because of the expenses, the Renicks are looking for ways to increase its effectiveness, perhaps putting in additional levels. 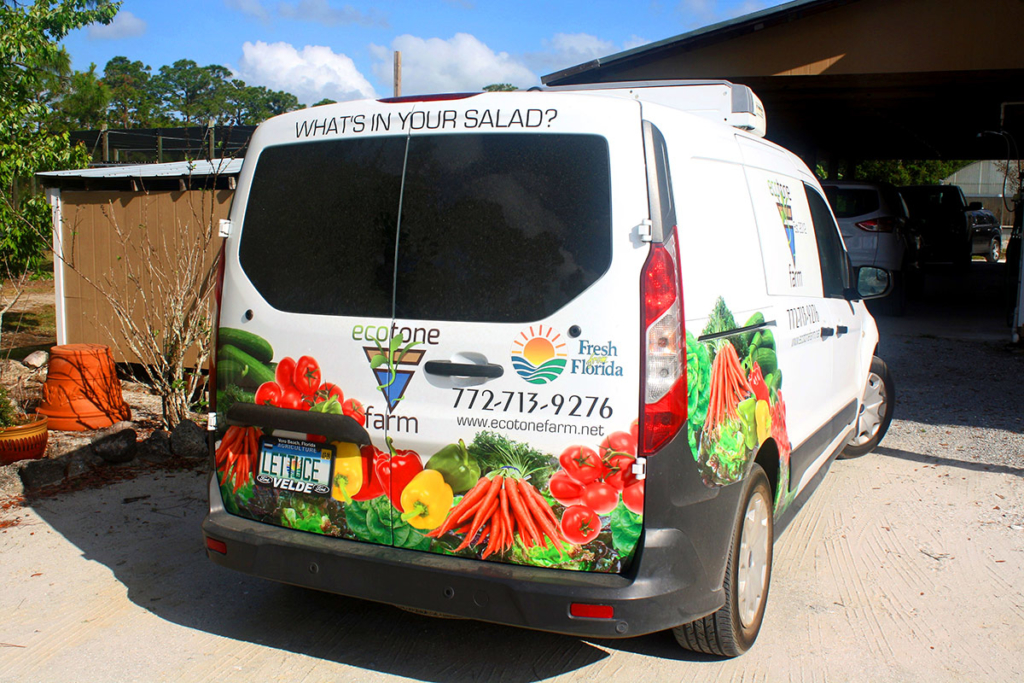 Lettuce is delivered to restaurants and individuals with roots attached, extending its life and freshness.

Ecotone grows cherry tomatoes using soil and drip irrigation and plans to add squash, okra and cut flowers. Fruit trees and blueberries are already in the ground. Ornamental plants comprise a small but expanding part of the farm. Nasturtiums are edible flowers with a spicy taste that can be used as garnishes or to add color to a gift basket. Sunflowers can be used as decoration, for seeds, even oil.

A community kitchen using local sources is part of the bigger vision.

“We want to bring the farming community together in a cohesive, successful unit,” Jerry says. “Farming is a struggle. People put their life savings into it. We help one another; we help our suppliers.”

“I love to cook,” Tamara says, “and would love to provide healthy meals and ready-made salads to drop off at retailers. There’s a community of local suppliers here who could provide chicken, lamb, beef.”

In the future, Ecotone may offer eco lodges — a way for visitors to stay and work on the farm. “You can go to a workshop, but you learn best by living it,” Tamara says.

The Renicks are pleased to be part of the growing Florida business that is agritourism, offering school groups and others a firsthand look at how food is grown or hosting events in a unique setting. 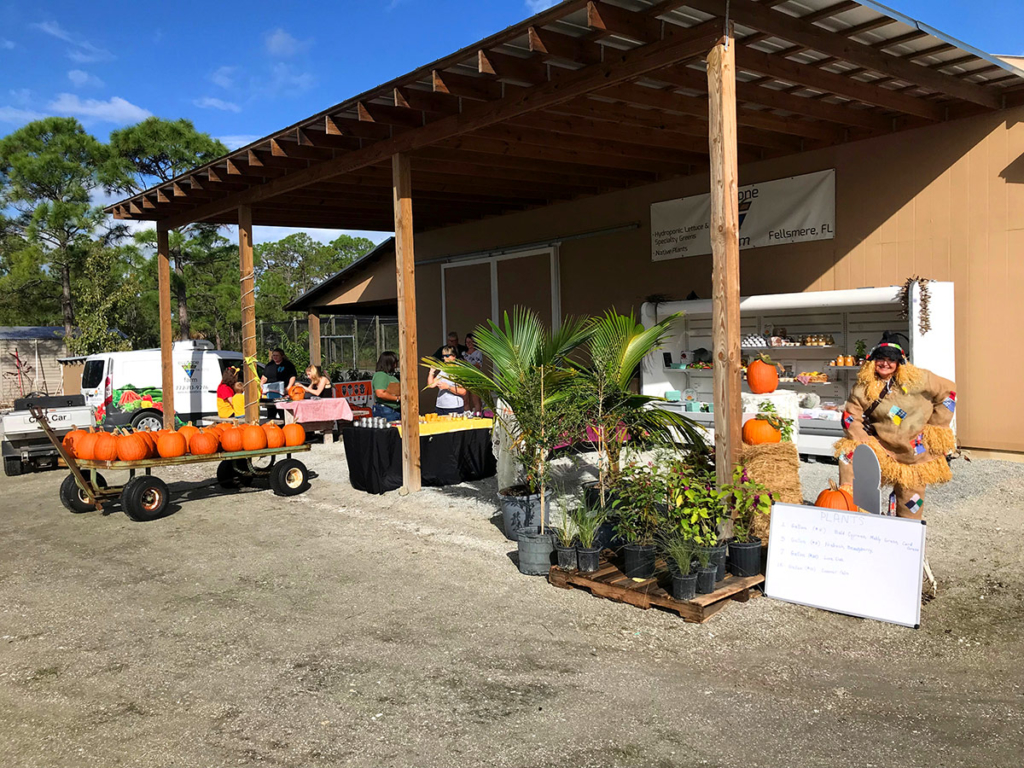 On opening day for the market last October, Tamara greeted guests as a scarecrow. Ecotone Farm is also available for hosting special events.

Local farm-to-table items have tremendous appeal — obvious by the company’s growing list of customers along the Treasure Coast and beyond. Jerry points out that agriculture has also become a matter of national security. As food suppliers have left the country, there has been a growing dependence on foreign land and workers. A food crisis in the future is not unthinkable and is one more reason why local farms are so important.

Today’s farmers have to know more than seeds and rainfall.

“One reality is climate change,” Jerry says. “In the last two years, winters have been warmer. The sun has been hotter. This impacts what you grow, how you manage pests, how you deal with it, what you grow.”

Ecotone Farms has a vision for today and for the future. So … what’s in your salad?