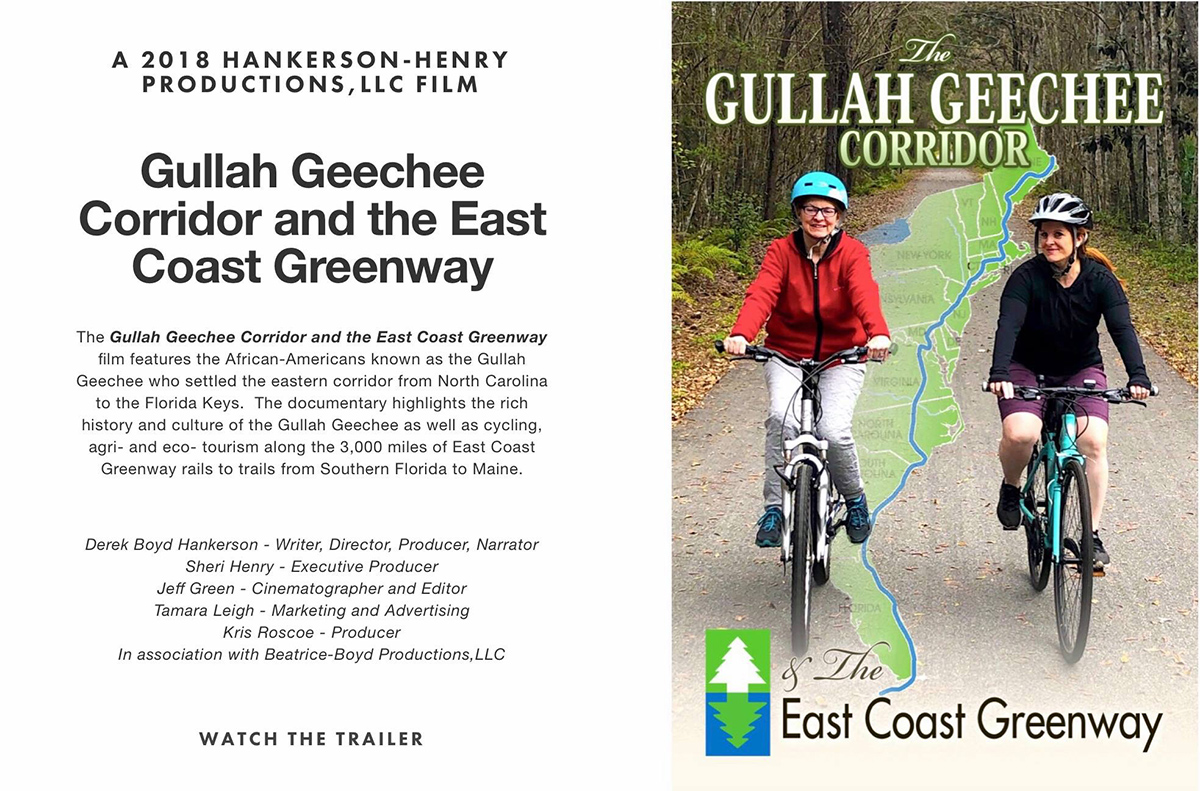 The Video On Demand release follows an active schedule of film screenings and speaking events of the “Gullah Geechee Corridor and the East Coast Greenway” documentary by Executive Producer Derek Boyd Hankerson, including at numerous Florida State Parks, non-profit organizations, and educational meetings. In addition to being co-Executive Producer with Sheri Henry of Hankerson Henry Productions, Hankerson also directed, wrote, and narrated the film.

The thirty minute documentary features the rich culture of West African descendants known as Gullah Geechee while highlighting three cycling trails. These trails are Rails to Trails, the SEA Island Loop, and the East Coat Greenway making it a perfect film for purchase for individuals, groups, or organizations both public or private including broadcasters (traditional television or online streaming), government agencies, education, tourism, cycling, and/or outdoor enthusiasts, as well as those interested in culture and ethnic diversity.

In making the film, Hankerson Henry Productions worked with numerous federal and state agencies tasked with promoting, maintaining, and expanding the Gullah Geechee Corridor as well as the East Coast Greenway trails, including Florida State Parks. According to Visit Florida, the state’s official tourism organization, “As the Sunshine State's No. 1 industry, tourism was responsible for welcoming 124.7 million visitors in 2018. Based on the latest economic impact study, Florida visitors contributed $85.9 billion to Florida's economy and supported 1.5 million Florida jobs in 2017. According to the Office of Economic and Demographic Research, for every $1 the state invests in VISIT FLORIDA, $2.15 in tax revenue is generated.”

The trailer is being made available to promote showings of the full-length documentary at film festivals, domestic and international theaters, in addition to promoting the VOD-Video On Demand sales and can be viewed on the film website at GullahGeecheeCorridorFilm.com

The full-length film released nationally in October 2018 in conjunction with then Florida Governor Rick Scott’s Proclamation of Gullah Geechee Cultural Heritage Corridor Month. The documentary promotes history and agri- and eco-tourism along the series of trails from northeast Maine to the Florida Keys as well as connecting the Gullah Geechee culture to the history of the Caribbean.

Hankerson’s earlier work on the trailer The Fort Mose Story which is the basis for a newly launched HHP Films, “The First American Revolution: The Fort Mose Story” IndieGoGo campaign lead to the success and completion of the Gullah Geechee Corridor and the East Coast Greenway film.

The other catalyst to the GGCATECG film is the book Hankerson co-authored, Belonging: The Civil War’s South We Never Knew, published by Archway Publishing also included Gullah Geechee characters. The book combines the history of Florida and the Civil War while inspiring readers to understand what they knew of the south in a different but riveting story that combines health, wellness, nature, and Florida tourism. St.Augustine in St. John’s county is where these West Africans known as Gullah Geechee acquired not only the “40 acres and a mule”, but more significantly, freedom itself.

In 2006, an act of Congress lead by Congressman James Clyburn of South Carolina established the historic Gullah Geechee Corridor. This Florida Congressional District was formerly represented by John Mica and Ron DeSantis and currently by John Rutherford, a former officer with the Jacksonville Sheriff.

Congressman Ted Yoho has been a strong advocate for Florida’s rich history to include the story of the Gullah Geechee descendants. Congressman Yoho spoke about these Floridians on the Congressional Floor in 2017. A historian himself, Hankerson also collaborated with Henry Louis Gates, Jr as well as Gullah Geechee culture and history organizations.

The scenic cycling and hiking trails in the film run through the rural community of Armstrong, Florida that was settled by the Gullah Geechee going back before. the Civil War. The Gullah Geechee Corridor and the East Coast Greenway features interviews, historic scenery and the West African people of the region who formed some of the first militias and forts to protect the Florida Territory. These Gullah Geechee descendants have also kept alive the traditions of basket-weaving, quilting, and the Ring Shout dancing.

Derek Boyd Hankerson M.A., whose own family is native to Florida and whose paternal grandmother was Gullah Geechee, continues to make himself available for screenings and speaking events in conjunction with the film. Sheri Henry, Hankerson Henry Productions cofounder, is originally from Wisconsin and has forged an unconventional career holding her own amongst the male dominated auto industry in her early days at GM (General Motors) in Janesville, Wisconsin. Henry is also the Director in the Medical Assistance Program including writing curriculum and teaching as faculty at Lake Superior College of the Minnesota State Colleges and Universities System.

Mr. Hankerson served as President Trumps Florida Northeast regional director during the 2016 primary, and served as field staff for the Florida GOP and the RNC during the general election. Mr. Hankerson currently works in the US Congressional office of Congressman Brian Mast in St. Lucie county, which is the next area the East Coast Greenway is slated to run through and connect.

Derek Boyd Hankerson, Sheri Henry, and Tamara Leigh, Director or Communications and Marketing, are all available to attend premieres, showings, and Q & A sessions.

For more information or to schedule showings of Gullah Geechee Corridor and the East Coast Greenways (https://youtu.be/4WOtcW6ztVg) contact Derek Boyd Hankerson at 904.377.3465 or [email protected] and/or Tamara Leigh at [email protected].